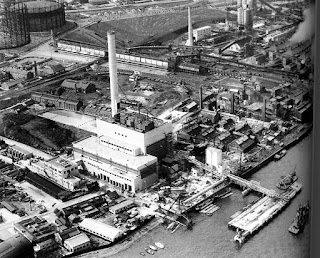 Dear Editor
I understand from a previous issue that all the records relating to the Blackwall Point Power station had been destroyed.  I presumed that this meant that not too much was known about the power station and therefore I decided to have a look at the literature.  I could only find a few mentions of Blackwall Point and I have attempted to put some words on these facts .
Keith Doyle

Blackwall Point Power Station was equipped with three 30 mw turbo alternators supplied by the English Electric Company.  The steam conditions at the turbine stop valves were 60 psig and 850o F (454oC). Condenser cooling water was taken from the River. Steam was supplied by three coal-fired Babcock and Wilcox boilers, each of 365 klb/hr capacity and the main high pressure pipework was also manufactured by Babcock and Wilcox.

The first turbo-alternator set was commissioned in the summer of 1951, the second was due to be completed by the end of that year and the third by the spring of 1952.

To benefit the production of turbines and generators BEA had a policy of standardising on a selected range of turbo-alternator sizes each with associated steam conditions. 30 mw was one of these sizes and was built.  Blackwall Point was stated in the technical press to have an output of 90 mw (33mw). However in a British power station plant performance schedule published in the Electrical Review of 1st June 1962, the installed capacity of Blackwall Point was given as 100.5 mw i.e. 33.5 mw per set. Presumably the original figure of 30 mw per set was nominal.

Keith included with his article a number of photocopies from Electrical Review with brief mentions of the power station and some of the statistics quoted above. They include a picture, in the issue of 12th July 1953, showing ‘the first of three turbo-alternators .. installed at Blackwall Point Power Station which will undergo a test run in the next few weeks.  The three 30 mw generators made by English Electric Co. will have a combined output equal to 120,000 hp and the one installed is hoped to be in operation before the winter. The second is expected to be completed by the end of the year and the final set by next spring. Over 2,000 gallons of lubricating oil has been pumped into the generators’ storage tank by the Wakefield Co. The illustration shows work in progress’.

This article appeared in the August 1999 GIHS Newsletter.  The pictures and photocopies mentioned ahove were not reproduced at the time - and a search for them is being inaugurated!