I know I have been banging on about the East Greenwich Tide Mill for years and years and years - an written about it in various places and with varying degrees of seriousness/pop reportage. 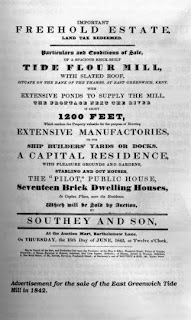 So - I am very pleased to see an article by Brian Strong in the new GLIAS Journal. 'A tidal mill at East Greenwich'.  Brian has been closely involved for many years with the tide mills at Three Mills and he is rather an expert on the subject.

Tide Mills are an interesting and rather neglected subject.  We all know about water mills with turning dripping wheels and jolly millers who in the olden days ground corn for grateful villagers in idyllic rural settings - we also know about windmills doing much the same thing but with wind. But tide mills??  They were obviously in tidal areas and they tended to be associated with something rather larger in scale than village corn.  We need to remember that mills weren't just about corn - they were about every possible industrial process that needed grinding or something similar - and tide mills tended to deal with the heavier stuff.  There were many of them round here - there was one on Deptford Creek near where the A2 crosses today at Deptford Bridge. There was what might have been a 12th century one discovered a couple of years ago on the Lovell's Wharf site and an even older one was found at Ebbsfleet when the station there was built.   More recent is Three Mills, the largest tide mill in the world,  just behind Tesco on the other side of the Tunnel Approach and which was at work until the Second World War.  Please visit and be amazed - there is a café and they do tours, check out their Facebook page under 'House Mill'. It's open every Sunday from the beginning of May to the end of October, 11
am to 4 pm.   Also both days of Open House.   Pre-booked tours on other days can be booked with Beverley Charters on 0208 980 4626

East Greenwich was never on that scale but it did have some interesting innovations in working methods, which Brian has outlined.  While the mill was still being constructed, Olinthus Gregory walked down the river wall from Woolwich to have a look at it.  Gregory was a mathematics master at the Royal Military Academy who would soon succeed Hutton as Professor.  Interested in mill machinery he wrote a definitive work 'A Treatise on Mechanics' in which the East Greenwich Mill features prominently.  So we have a wonderful first hand description which Brian has extrapolated and explained. 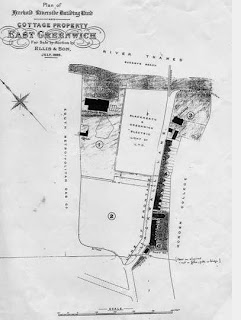 The East Greenwich mill is important in Greenwich history in that it represents what must be the first developer on the Peninsula - a subject we are now all very familiar with.  It is also the site where Richard Trevithick's career as an innovative steam engine builder took a nose dive when the boiler of his engine, used to pump the mill's foundations, exploded due to negligence on site.  Its a mill we need to be aware of - and all the more because it appears that English Heritage were ignorant of its existence in their site report to the Council.   Hopefully Brian's work can help change that perspective

Finally, I am very chuffed that the cover of the Journal has used a design based on Gregory's drawings of the moving parts of various mills. And its shiny!  It looks much better than the GLIAS Journal's rather amateurish past efforts.

Please buy it. Cost through post will be £5.50 - £4 for Journal + £1.50 p&p.  Cheque made out to GLIAS.  By post from Greater London Industrial Archaeology Society, Rivendell, Knockholt Road, Halstead, Kent  TN14 7ET . GIHS has some copies which we can sell at meetings - or I am happy to sell to anyone who asks me personally for it. That's £4 - please note GIHS is not making any profit.  email indhistgreenwich@aol.com


Oh and - I have been so excited by the mill that I nearly forgot to mention the other really really important local article in this journal.  That is about the iron slip cover roofs at Deptford and Woolwich Royal Dockyards. This is by archaeologist Duncan Hawkins - who has come to talk to GIHS in the past about his work at Deptford - and perhaps we should ask him again.

These roofs were revolutionary when they were installed in the Royal Dockyards between 1844 and 1857 to design briefs by the Royal Engineers.  They were built to cover over ships being built on slips in the Dockyards. Three were built at Woolwich and three at Deptford - and two of the Woolwich ones are now at Chatham Dockyard where they can be seen. The third is what is now known as Olympia Warehouse at Deptford - and at the mercy of the development process.

This is an important article describing not only an innovative construction method for spanning large areas but is also important in the history of our two Royal Dockyards and in the history of the Royal Engineers (dare I point out that they originate in Woolwich too).

Please buy it and read it for all those reasons.

- and - there is also an article about Stratford Railway Workshops - look, they used to build railway locomotives, big ones, just over the river there in Stratford. You need to know about that as well. And there is an article about Three Mills which I mentioned above although this is about Acetone production.

Round up of whats what again

Just saw the latest cruise liner turning at Enderbys  - it probably isn't industrial history to have noticed a drift of smoke off her - what will the berthing arrangements be when the cruise liners come there???

I've been asked to give the new website of the Naval Dockyards Society http://navaldockyards.org

Dig at Woolwich - it appears that one of the old Woolwich Gas Works sites has been unearthed by archaeologists.  Chris Mansfield  as an assiduous Woolwich photographer went down there and took some pics  - and was promptly thrown off the site by Berkeley Homes!!!  Meanwhile the archaeologists had asked Malcolm Tucker (top London industrial archaeologist) down to see the site. Malcolm (bless him) told them that I (Mary Mills) had a PhD in local gas history, lived locally and would probably like to see the site.  Long silence - followed by an email from the archaeolgists to say they had now left the site. Chris Mansfield meanwhile had persuaded Berkeley Homes to let him back in.
(small appendix - 20 years ago I went down to another lot of archaeologists digging up the other old Woolwich gas works site  - 'can I have a look at the dig please??' I said - ' Come on in darlin' - we'll show you a thing or two, eh lads!')

Peter Kent - the current PLA online newsletter includes a UTube interview with local artist (and GIHS member Peter Kent)  I got this by email but I assume it can be accessed via the PLA website  www.pla.co.uk/

Warship Anne Trust - this is a meeting on 4th July 2015 in Hastings about Warship Anne whose remains apparently lie at Pett Level. The speaker list includes some of those who have been involved in research at Deptford and Woolwich Dockyard. Details www.shipwreckmuseum.co.uk


London and the Whaling Trade.  This is a pre-notice of the future publication of the transactions of the Conference held on this subject a couple of years ago.  It includes a number of papers of Greenwich interest including Richard Sabin on the Greenwich Whale (the 17th century skeleton found at Bay Wharf) and Charles Paton on the Enderby Family (we understand he is about to publish a book on the family).  Docklands History Group are inviting advance orders  www.docklandshistorygroup.org.uk

GIHS has been talking to local GLA member, Len Duvall. Len has suggested we draw up a list of all those little things around Greenwich and Woolwich, which come from the past and need looking after.  Let us have your suggestions  - please......................
Posted by M at 08:54 2 comments:

A small personal comment on tugs, the River, famous paintings and stuff

Until the developers and their tower blocks finally close in - I can still see a tiny snitch of the River, off Enderbys, from my bedroom window.  A couple of days ago I was watching a group of tugs bringing Ocean round before taking her further up river.  This morning, very early, I saw her depart.

By chance, just now, I was looking at 'A Hundred Years of Towage' - a history of Watkins Tugs.  This was written in the 1930s when the River was the River and Watkins would never have dreamt it could ever be possible that it would ever be deserted and the fuss we make now about just one boat coming up to Greenwich.

Anyway - he does say something about Greenwich which might be interesting "On the Kentish side of the River are the Greenwich buoys used by the big ships which have to turn round below Greenwich Pier in order to take up their position satisfactorily and are moored fore and aft with their head downstream. A strong tide setting straight to their position adds to the usual difficulties of putting ships on to buoys and it is a particularly ticklish job to get the inside ship out without disturbing the outside one.  These buoys are mostly used by tankers and sugar ships but latterly with Polish and German cruising liners, acting as floating hotels while their passengers have the chance of seeing London and when they are so occupied Watkins tugs with passenger licences have been employed as tenders to them, taking their passengers ashore and bringing them off again."

So there you -nothing new at all in cruise liners, or turning big boats. And, note, the boats then were stacked alongside their berths - one, two or three.

So, why was I looking at the history of Watkins?? Well, on Saturday I went to a conference on London shipbuilding and heard Professor Andrew Lambert speak on JM W Turner, Charles Napier, and the 'Aaron Manby'; the Iron Steam Boat and the Making of the British Century. This was a really, really great lecture - but, like everyone else, Andrew showed a slide of the 'Fighting Temeraire' - and he talked a bit about the ideas behind the painting.  Now I knew that Watkins had something to say about this - and - back to the History of Towage - and Monarch - she was Watkin's first steam tug and they were very, very proud of her

"In the 1830s the Navy had very much more interest in the Thames than it has today ..... and the Monarch was constantly being chartered by the Navy for odd jobs.  She was towing Nelson's famous line-of-battleship Termeraire up the river to be broken up at Rotherhithe when Turner, the painter, who was one of a picnic party on the riverbank, saw her and made a sketch which developed into his famous painting ..... In kindness one must understand that the famous line-of-battleship was of far more interest to him than the tug which was ahead of her and while he took considerable pains over her technical detail, embellishing it a little it is true, he could not spare much time on the Monarch and his picture must not be taken as an accurate portrait of her."

Only tugmen understand about tugs - as Watkins makes quite clear - and I am not going to go on quoting from the book - particularly the views on the Navy and its officers.