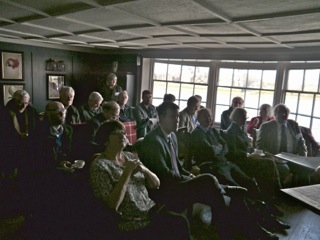 Enderby Group - On Monday the Enderby Group held a seminar for a small selected audience of local politicians, prominent citizens, museum operators and historians and some developers.  This consisted of a walk from the Cutty Sark Pub to the Enderby Jetty - (and thanks to Keith Palmer of Alcatel-Lucent who opened up the jetty and made a major contribution to the seminar later). Various items of historical interest were pointed out along with some of the group's ideas for the future.  They then went back to the Crows Nest in Cutty Sark Pub (and thanks to the staff) where we had coffee and a chat. Stewart Ash gave a presentation on the history of the site, and Elizabeth Pearcey talked about our hopes for the future and the possibilities.  One problem that the group has is that no-one has any idea what Barratt plans for Enderby House - one participant at the meeting said that they were turning down offers to purchase it, and the Barratt staff who had promised to attend, sadly did not appear.  Planners present confirmed that Barratts are obliged under their planning consent to renovate the building - but, again, no one still has much idea what the state of the building is now.  Council staff confirmed that have urged Barratt to talk to the Group

Come on Barratt - we can all work together on this!

Some pictures of the event together with a write up is at  https://www.facebook.com/search/top/?q=enderby  and  http://onthethames.net/2016/03/14/enderby-campaigners-discuss-future-historic-site/
(and thank you Rob and Danny - and Michael for the picture above)

The Enderby Group produced an information pack and a walk document for the event - a limited number of these are available should anyone be interested.

info wanted: Hello, I am interested in the old firm of T W Thompson & co and the Endyne works, I have found a small amount of info on line, just wondering if there are any old photos   of the Endyne works, or of the Engines & Dynamos that they built, and when and why the company closed down.

CROSSRAIL ARCHAEOLOGY -  In most of the 19th century - in fact up to 1912 - anyone who lived in East Greenwich or on the Peninsula would have had their river view dominated by the huge warships which were built on the north bank alongside Bow Creek - and elsewhere of course. This was the Thames Ironworks site on the Essex Bank of the Creek.

If you go now to Portsmouth Maritime Station the main thing you can see outside, looming over the station is the vast bulk of HMS Warrior - in the 1850s that bulk would have dominated the our view of the river, and Warrior is very far from being the biggest ship built in Bow Creek - and in those days they expected to see big ships on the Thames.

So thanks to Crossrail the (fairly minimal) archaeological dig on the shipbuilding site has been published and is available. Its fine, although it has its limitations - an interesting beginners guide to Thames Shipbuilding, with some useful details on Ditchburn and Mare (I have never seen them written up before) and on the Hills (who are a specialist subject of mine and basically Deptford and Greenwich based).  There is a lot of detail about the places they dug and what they found there.

My main criticism is that although they say they have consulted shipbuilding specialists there is no mention in the acknowledgements of anyone from the Museum in Docklands or the Greenwich Maritime History Institute or indeed any of the people who have been running and participating in the bi-annual Thames Shipbuilding Symposia - so - er - why not??

However, we should thank Crossrail for getting the archaeologists to publish - most of the industrial sites in Greenwich, now covered with tower blocks, have had 'desk tops' and digs and reports - which no one has ever seen, or will see.  Bad bad bad
Daniel Harrison.  The Thames Ironworks 1837-1912: A Major Shipbuilder on the Thames. MOLA (sorry no idea how much or where you get it from - someone said Oxbow Publications)