Steam colliers on the Thames 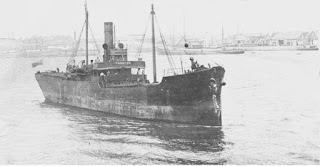 STEAM COLLIERS ON THE THAMES

IN OCTOBER GIHS was pleased to welcome Alan Pearsall to our meeting to talk on Steam Colliers. The text reproduced below is that of a similar talk given to the Docklands History Group last year (and reproduced with their permission). Thank you Alan.

Alan began by defining colliers as vessels carrying coal between the North Eastern ports and London. From medieval times until the advent of the canals and the railways, virtually all coal to the capital arrived by sea.  The last collier disappeared from the Thames only twenty years ago. Until 1810 -1820, coal was delivered by sailing colliers, comparatively small vessels carrying about 200 tons each. They would discharge the coal overside at tiers or at riverside berths, rather than using the enclosed docks. With the expansion of London in the first part of the nineteenth century, port facilities became very strained.  As the sailing colliers tended to arrive en masse on a favourable wind the river became clogged.    Additionally these vessels completed only about twelve voyages a year, partly because they had to be ballasted for the return journey after discharging the coal, whereas steam colliers could be water ballasted.

Steam appeared on the Thames around 1814, the first vessels being paddle steamers.  Since the paddles had to be sited amidships, cargo-carrying capacity was limited. The introduction of iron screw steamers in the 1840s solved many of the problems, and allowed an increase in cargo capacity.

In 1852 a consortium of NorthEast coalmine owners led by Charles Palmer was formed to construct larger vessels.    The first of these was the John Bowes, which could carry 500 tons of coal.  Many steam colliers were built by John Scott Russell on the Isle of Dogs but the principal yard was Palmer's at Jarrow. When the Palmer's yard eventually closed the town of Jarrow became a depressed area for many years.

Alan gave some impressive figures showing how the advent of steam colliers revolutionised the coal trade Into London:

The demand for coal was stimulated by the advent of gas lighting - the new gas companies demanded regular supplies of coal in large quantities and the sailing colliers just could not compete. Another stimulus was the Crimean War in 1854, when steam colliers were pressed into service to move troops and munitions to supply the army and navy. Steam colliers could carry 1000 tons dead weight and made one return voyage each week: sailing colliers could only carry 200 tons and only made 10/12 voyages a year.  By the 1860s most coal carried to London came by steam colliers, with sailing vessels picking up the pieces.

Alan explained that, despite the dangers and arduous nature of the trade some steam colliers had a life of fifty years.  Some were re-engined to upgrade their performance, being strengthened and fitted with compound and even triple expansion engines.   Ships were owned in shares to reduce and spread the insurance costs.   Several owners were aristocrats, like the Marquis of Londonderry and the Earl of Durham.  A Coal Exchange was built in Lower Thames Street to facilitate trading

In the early days the coal was discharged manually by coal heavers who worked in the holds of vessels shovelling coal into baskets which were hoisted up on the yards of the ship and discharged into barges or carts.  Eventually grab cranes were introduced, in around 1900.  With the continued expansion of London and the increased use of gas and electricity the requirement for coal was insatiable

William Cory began by discharging coal in Victoria Dock, but objected to paying dock dues.  He found a large hulk called the Great Atlas and moored it off Angerstein Wharf, and fitted it with hydraulic cranes. Colliers were unloaded on one side and discharged into lighters on the other.

New wharves were built not only along the Thames but also in creeks and inlets to supply the new gas works and power stations. In 1869 coal was delivered directly to the newly opened Beckton Gas Works. The London Gas Light  & Coke Co. commissioned Palmer's of Jarrow to build vessels with telescopic masts and collapsible funnels for delivery to Nine Elms, the first "flat irons". In the first half of the Twentieth Century, scores of flat iron steam colliers streamed in and out of London, owned by Gas and Electric Companies, William Cory and Stephenson Clarke. Although the domestic market for sea coal declined as it tended to be brought into London by rail and then delivered to houses via the horse and cart the demands of industry continued apace, spurred on by gas and electricity and power stations.

However, Clean Air legislation in the 1950s and 1960s dealt these industries a heavy blow.  Some colliers converted to diesel but with the introduction of natural gas many power  closed or moved away.   Gas production in London ceased in 1970 and the need for colliers disappeared.


This article appeared in the November 2000 Newsletter
Posted by M at 09:52