The picture below has been kindly sent by a reader from South Africa
This plaque is at Cape Point Lighthouse, South Africa. Picture taken January 2013 - note the tower made at Victoria Foundry - which was on Deptford Creek in the Norway Street area.
Thanks to Hew Prendergast for sending it 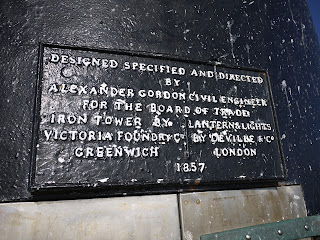 Harvey's - were a large metal working firm who used to be in the Woolwich Road in Charlton - roughly where the fire station is.

We were given a whole pile of their works magazines and they are very worth looking at for what it was like in the 1950s!

So June 1952 and there is a report of the Annual Prize Distribution - this is prizes to the works apprentices and the whole thing was handled like a proper educational awards ceremony.

First Mr. Eatwell - Managing Director - thanked everyone and said the firm had 18 apprentice draughtsmen, and 58 craft apprentices and 19 young men 'who would be considered for indentures in due course.  He referred to the Works Welding School, and the Sheet Metal Class - with thanks to Mr. Johnson, foreman of the Zinc Shop.

Second - Sir Frederick Handley Page, no less, aircraft magnate. He said how Harvey's products were used in his aircraft --- and 'half and more of the people graduating from universities had only a knowledge of cultural subjects.... they were at a disadvantage with the apprentice who started in a workshop at a much earlier age'.
Sir Frederick also revealed that he had as a young man worked in Charlton for Johnson and Phillips (did he?? do we know any more about this??)

He then presented the Apprentice of the Year Award to Mr. Russell of the Heavy Tank Drawing Office.  He had been apprenticed since 1945 and got his indentures in 1951 - interrupted by a year on National Service   He got a wristwatch as well as the shield.

They then had some light refreshments - and students got their prizes, mostly things like useful slide rules, and text books.

What followed was a long list of the top three students in each category - all City and Guilds, Royal Society of Arts and National Certificate craft classes.  They had studied on day release at Woolwich Poly, or SE London Tech.      The only exception being a cost accountancy student who got a brief case as a prize for passing his three part exam in Factory Organisation

Note that these are all men

The Women's Page is at the back - including a recipe for Daffodil Biscuits, which I am happy to share.

Cesspool emptying equipment made in Greenwich

Thank you to Brian for drawing our attention to an article in Vintage Spririt -   this is by Ron Henderson and appeared in their May 2012 edition.  It is on the romantic subject of cesspool emptiers.

The article starts by explaining the need to empty cesspools before the days of main drainage - and how Greenwich based Merryweathers were on of the first to recognise that this process 'could be mechanised and improved'.

Early on a tank was mounted on a horse drawn cart - air would be withdrawn from it with a pump and the contents of the cesspool would then be removed into the tank.  Initially the pump was hand powered but Merryweathers a 'power pump driven by steam or in later years by a light single cylinder petrol or paraffin motor'.    However 'a more advanced method of making an air vacuum was by means of high pressure steam supplied by one of Merryweather's light water tube boilers'  .

An early local authority to adopt this apparatus was Rochester who took three 500 gallon cylinder vans and three hand pumps in 1897 - and they later became one of the first to take on steam pumps because of the difficulties with Rochester cesspools.

Merryweather also supplied deodourising equipment - air pumped from the tank passed through portable stove or disinfecting chamber to limit the smell.  Steam pumps did not need this as such air was passed through the firebox of the boiler to cut down the smell.   This process meant that cesspools could be emptied in the day time - in London, by law, they could only be emptied after midnight when the process was carried out by gangs of men with buckets.

The first steam vacuum exhauster was supplied to Romford District Council in 1905 - the article gives a detailed description of the vehicle - and was a 'huge financial saving  for the council'.  A similar machine went to Eton District Council.

Merryweathers also developed a petrol propelled chassis and also supplied vehicles which could also be used for street watering and gully emptying.

The article is lavishly illustrated with photographs of Merryweather equipment - some of it clearly taken at their Greenwich High Road works.

- a pump designed to be horse drawn with a separate manually operated pump destined for Killiney and Ballbrack council - and taken outside Merryweather's Greenwich 'Fire Station'.

- the same pump preserved in the Dublin Transport Museum today

- Rochester Corporation equipment at work (assume this is in Rochester)

Thanks Brian for this - more to follow - and  - Ron Henderson the author.  Ron - if you ever see this, please get in touch, GIHS are always looking for more info and for speakers.