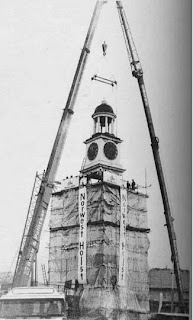 It was decided in consequence, to connect the movement from the four faces, and insert an electrically operated self-correcting motor to drive the hands, which was done in September 1991. The original movement was left in place, and in the event of Thamesmead’s eventually creating a museum there will be the possibility of removing it and mounting it on permanent static display.
Posted by M at 11:02 No comments:

Thanks to Diana Rimel a whole lot of old leaflets and info has been given to us for this blog. First up is an article from 'Waterfront Community News' written by our Chair, Sue Parker, in 1993.
I suppose comments should be 'contrast and compare'

anyway - here it is - A Walk Along the Waterfront.


"If you travel along Woolwich Church Street from west to east, you will pass by the wall of the former Royal Dockyard, which is now called the "Commonwealth Buildings" site.   Sometime after the closure of the dockyard in 1869, this part of the yard occupied by the RACS, which now, as the CWS only retain the statutorily listed gate house buildings. The old steam factory building remains on the site. It commemorates the transition from sailing ships to steam power in the Dockyard, and is at present used for storage purposes. Several housing schemes have been projected for this site.   A river-side walkway should be made here to link up with the walkway in the adjacent Dockyard housing estate.  The walkway passes a small historic gun battery, and leads to two former docks. The Clockhouse has been retained and is now a community centre, and the Gate house is now a public house.   The dockyard walls remain around the estate.
Below St. Mary's Parish Church, there is now a welcome sight, a boat building and repair yard, very suitable for this area.


Woolwich Free Ferry is threatened by the proposed East London River Crossing, but whatever the outcome of this the ferry should be promoted as a tourist attraction, and part of a tourist-trail through historic Woolwich. Walkways and a riverside cafe-restaurant should be made in the area leading from Ferry Approach to the Waterfront Leisure Centre. The leisure centre itself unfortunately obscures the view of the river, although there is a good view from its restaurant. This together with the nearby Crown & Cushion public house, also with its river views could make a striking riverside leisure area.
On the site of the former Woolwich Power Station. A complex of administrative and teaching buildings for the new Greenwich University is planned, and this looks, according to the plans, quite suitable for the area, and small in scale. However, there is a Victorian building plus associated weigh-bridge on the site which should be incorporated, and not destroyed.  This site is also important for its archaeological significance being the site of a Roman, and Iron-age waterfront fortification. Any future redevelopments need to be preceded further official archaeological investigations.


In the 1970s an important 17th century pottery kiln was found in the vicinity of the former Crown & Anchor public house, and this is now in store awaiting public display. The archaeological excavations which uncovered the kiln had been launched to discover any remaining traces of Anglo-Saxon Woolwich or the Roman road. After the dig was over, the site was due to be developed as an office block, but eventually the Waterfront Leisure Centre was built there instead.


Market Hill still retains historic buildings, and together with Hare Street and Powis Street, and Cally Yard with its horse stables, could become a conservation area. Above the modern shop fronts many Victorian and Edwardian facades remain, including the terracotta RACS building with its statue of Alexander McLeod. There are also two listed cinemas built in the 1930s in this area.
Woolwich market is in important local area, and is well used. The indoor market is less well known, and has an interesting internal roof structure.  The distressing state of the former Royal Arsenal Gate-House is a lasting reproach to Greenwich Council, and immediate repair and use is essential in any tourist initiative.


The opening up of the Royal Arsenal site itself is of immense importance, and careful integrated plans need to be formulated, perhaps under a heritage trust to safeguard its historic buildings and promote appropriate developments.
other articles in the newsletter include
Transport Working Group - a report
Pollution
Port Greenwich
Community Grants Crisis
meeting reports
- happy to scan and add if people are interested

The traditional Woolwich Arsenal Station has been demolished recently, and a new structure will appear instead, to many inhabitants   regret.
Posted by M at 08:49 No comments:

They are asking for papers for a Conference on The River and the Port of London to be held 16th November 2013 at the Museum of London. No details of how to contact them but the new newsletter editor is vanthony@museumoflondon.org.uk


Royal Laboratory building refurbishment – Richard notes that these buildings are the oldest in the Arsenal, dating from 1696 – and a laboratory was where people laboured. He notes that the developer had intended to refurbish them fir community use but by 2013 plans had changed ‘due to overwhelming pressure for more housing’ and so they will be flats,

19C Monorails - these were the subject of the Blackheath Scientific Society's April meeting. Richard tells us that the earliest one was made to move building materials round the Victualling Yard at Deptford in 1823. “It had cast iron posts nine feet apart with a forked top to support wooden beams 3" wide by 9" deep capped with a rounded iron rail. A pair of waggons was hung on either side of a two wheel bogey, below the level of the rail. Four men could use it to manage a balanced load of 2 ½ tons’.  It was designed by H R Palmer, who
Richard cites Monorails of the 19Century, by A S Garner, Lightmoor Press, ISBN 13: 978 1899889 S7 0

Ecological Garden. This has resulted from an award from the waste disposal company Biffa. It is to be built on an area between the concrete yard and the access track to the Thames Path, where they say ‘behind large ivy-covered trees lurks a large abandoned penstock building with a grill gate and a separate vent shaft. Wildlife in residence included various birds plus short tailed voles and grass snakes with visiting foxes and squirrels. With the help of someone from Crawley Council they have planted more trees, dug a pond and a viewing area and undertaken much work to encourage more wildlife.


The Centrifugal Engine House – this is part one of an article about this building which is not in the Trust area and still used by Thames Water. It was opened in 1916 and article describes work being carried out along with some pictures.  The engines came from Fullerton, Hodgart and Barclay Ltd., Vulcan Foundry & Engine Works in Paisley and were vertical enclosed triple expansion type. Pumps came from Boving & Co. Ltd., and an Overhead Travelling Crane was from Joseph Booth Ltd. of Leeds. Some problems with these orders are described.


Other articles in this issue include:
News from the grounds maintenance team
A short history of sewage and its disposal
The Great Stink
Volunteer spotlight
Worduku
New members


Details www.crossness.org.uk
Posted by M at 10:46 No comments:

The latest issue of Subterranea reports a visit by three of their members - Stewart Wild, Paul Sowan and John Lill - to the Crossrail 'almost completed sub-surface station box'.


They report on the surrounding area where new 'apartment blocks are interspersed between retained Arsenal buildings, some of which have new uses' - and they also note the Dial Arch pub (which, of course, acted as a sort of 'waiting room' while the box was open to view).

They also note that excavation uncovered 'the foundations of former buildings and three abandoned old cannon barrels' and, in addition, 'Thanet Sand, vast quantities of which were excavated and found a ready sale as an eminently marketable commodity, with uses including golf course bunkers". As geologists and historians they note 'the occurrence of this sand at Woolwich, an ideal moulding-sand for casting bronze on, has been said to be the reason why the Royal Laboratory was relocated here from Moorfields in 1715'. They also noted that 'the water table in this part of Woolwich lies just below ground surface level, so the station box had to be made watertight, and measures taken to prevent it from floating like a boat'!

However - they are Sub Brit after all - descended to 'admire the huge space which, when the railway is completed, will house escalators, a very wide central platform and running lines either side'.... and then 'beyond the new station the two tunnels will slope downwards into waterlogged flinty chalk below the Thanet Sand and pass below the Thames en route to join the Essex branch of Crossrail, then on westwards to the western portals beyond Paddington.'