Soap and the Chief Guide

Last night's TV on Scouting for Boys reminded me of something - with all the speculation on BP on sex (or lack of it) they only had a tiny mention of his wife, Olave - who was of course a local girl, coming, I think, from Westcombe Park Road.
Olave Soames was a member of the family who owned Thames Soap Works factory which was on the site of the Seriol sugar works on the Peninsula. Soames made some terrifyingly ungentle soaps in the days when disease and dirt stalked the area and tar was seen as an essential antiseptic rather than a threat - British Carbolic was one of theirs.
It all seems to go together somehow!
Posted by M at 09:30 No comments:

MERRYWEATHER AND OUR PROGRAMME

Please remember out next meeting - 20th May - that's Tuesday

I am really really pleased to have got Neil to do this as Merryweather were a most important local company whose products went world wide - every local museum in the world has their old Fire Engine on show. Try putting 'Merryweather Greenwich' into the net and you will come up with 100s of proudly preserved engines and sites. Something locally preserved are the pumps on London Fire Brigade Float Massey Shaw - hopefully soon to find a permanent site on the Greenwich riverside.
The meeting is as ever at Old BakeHouse (back of Age Exchange building in Blackheath Village) 7.30 just turn up.


Other future meetings
10th June Lindsay Collier on The Industrial Museum of the Lee Valley
15th July Roger Owen on Early Steam Ships and the City Canal
23rd September Hugh Lyon on The impact of railway building on Greenwich
21st October Janet MacDonald on The Royal Victualling Yard Deptford
11th November James Trimmer on The Work of the Port of London Authority, with special reference to Greenwich
11th January Richard Hartree. on John Penn the work of the Greenwich based engineering company and its founders
17th March John King on Lullingstone . The Airport that never was.
Posted by M at 22:16 No comments: 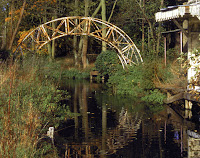 Through my door from a neighbour has come the latest leaflet from the Royal Gunpowder Mills at Waltham Abbey - OF COURSE this is to do with Greenwich's Industrial History since the factory at Waltham Abbey was very much part of the diaspora of government weapon's establishments that spread out from Henry VIII's Greenwich, partly via Woolwich, from Tudor times to the mid-20th century.
Today the chemical weapons establishment at Waltham Abbey is a fascinating and beautiful parkland site which can still evidence strong links with Woolwich and the Arsenal - very visibly through Locomotive Woolwich standing centrally on display. Everyone should go there - they are open every weekend and bankholiday from the end of April to the end of September. Check them out and their events programme at www.royalgunpowdermills.com
Posted by M at 22:03 No comments:

Someone has just shown me a page from the Magazine 'Model Engineer' for 1946 and drawn my attention to an advertisement. This is for the Alpha Engineering Company - 'Specialists in the Manufacture of Special Purpose Cutting Tools', Perseverance Works, Woolwich Road, London, SE10. Phone:GREENWICH 1838.
So - any one any ideas? where was the Perseverance Works and does anyone know anything about Alpha?
Posted by M at 22:00 1 comment:

Big event last night in the Painted Hall where the great and good were all asked to take part in the launch of a a new ‘Learning and Interpretation Centre’, planned for the Cutty Sark area by the Greenwich Foundation. This is to ‘create a new permanent exhibition in the main hall of the Pepys Building with a learning suite, and temporary exhibition space on the mezzanine level. It will be called ‘Discover Greenwich’ and explore themes in the evolution of the town and the Old Royal Naval College site - Greenwich Palace – Royal Hospital for Seamen – Royal Naval College – Architecture – Craftmanship – Greenwich World Heritage site today – The River – Greenwich, London and the World. They are looking for volunteers for the Foundation, and/or participate in an oral history programme and/or make a donation. www.oldroyalnavalcollege.org.
So - what about industrial history here - well it has just managed to creep under the door and get a little bit noticed. Part of this was the investigation of the old brewery area - but also keeping in the minds of the people setting all this up that all of what we know as 'Royal' and 'Maritime' Greenwich had to be backed up by a large and highly skilled workforce - and that those skills were also transferred into a wider world of economic activity and endeavour - and just as important!
Posted by M at 06:53 1 comment:

HAPPY BIRTHDAY JACK!
-and here is a picture of the Arsenal - at the place where you said your desk was: 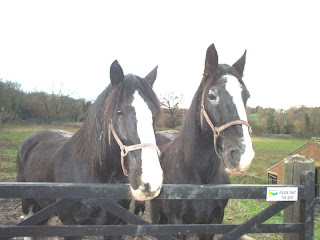 I have been very fond of saying that if you want to do 'real work' these days locally you need to volunteer at Woodlands Farm. The Farm is on the site of the old Co-op Farm and Abbatoir (back issues of Greenwich Industrial History will tell you about work there and their two records, one for the fastest beef gang in Europe and the other the number of people shot by the police). Anyway - all that aside - please support the Spring Show at the Farm on 18th May 10-30-4.30 with stalls and so on. They say 'Meet the Wood Bodger' - that must be industrial! and Greenwich Industrial History Society will certainly have a presence there, as will the Severndroog Trust and many others. http://www.thewoodlandsfarmtrust.org/.
Posted by M at 09:21 No comments:

Not really sure if this is industrial history or not - but it's certainly inspired by it. This is the 100 Cauliflowers Project, where cauliflowers have been growing all winter alongside the river by the old Power Station jetty on the Peninsula. Why? They say that 'up until the 1960s cauliflowers were grown here - so local residents worked to plant and grow 100 cauliflowers in the shadow of the Dome. There is a harvest festival on 17th May in a local school where children and their parents will prepare the cauliflowers helped by 'Hand Made Food' and then eat them! http://www.100cauliflowers.com/
Posted by M at 09:18 1 comment:

Gas Main from Greenwich to the Old Kent Road 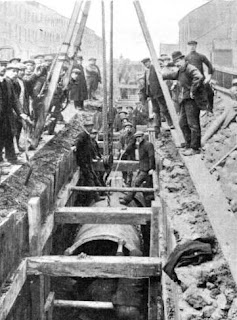 The latest issue of 'Gaslight' - the newsletter for historians of the gas industry - has reproduced a fascinating tender document about laying the gas main from East Greenwich to the Old Kent Road gas works in 1884. The contractor was Thos.Docwra and Sons of Balls Pond Road in Islington. and they were charging 23/6d. per yard for the work. This included costs for the employment of a ganger, a jointer, an excavator and a horse and cart - fences, lanterns, timbers left in trench, deals, reinstatement of Macadamed roads, cartage to the rubbish shoot and lead joints. Perhaps this is just a reminder that road works in East Greenwich have always been with us!

laying the gas main in Bridge Street,Greenwich
Posted by M at 06:47 No comments:

In the latest newsletter of the Woolwich Antiquarians is an article by Richard Buchanan about Callis Yard in Woolwich. This describes a visit there of the Greenwich Conservation Group. Callis Yard is an old stables built in 1899 by the Woolwich Board of Health - basically what was then the local Council to keep the municipal horses. What it consists of is a three storey stable block where dust cars were kept at ground level, the horses on the first floor and there food up above. The site is likely to be redeveloped soon.
Posted by M at 06:41 No comments: