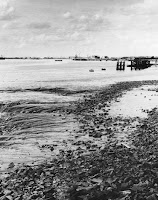 Tripcock Point is where the Princess Alice sank and nearby is a descriptive plaque pointing out the site. There is also a modern signpost giving the walking distance to Dartford and Dover eastwards; and Aberdeen westwards...
Posted by M at 09:16 No comments:

Monuments around Woolwich with an industrial interest

The current issue of the Woolwich Antiquarians newsletter highlights Jim Marrett who opened their autumn season of talks giving the Vincent Memorial Lecture on 30th October 2010.


He concentrated on some of the Statues and Memorials around Woolwich. These are obviously very varied - here are some of the ones he mentioned which have an industrial interest:

There is the RACS building in Powys Street with its statue of Alexander McLeod with the motto "each for all and all for each".
(I hope we don't need to explain that RACS was the great Royal Arsenal Co-operative Society begun by Arsenal workers and one of the earliest co-ops in the world).

Jim next noted that 'We kept our feet dry by using the Free Ferry boats' - and that the boat names include 'Ernest Bevin' (Wartime Bevin Boys and then Labour Government Foreign Secretary - and of course someone who rose through the trade union) and John Bums (famous for trhe Dockers tanner dock strike in 1889, then a radical MP and one of the the first Labour Ministers). He reminded his audience that it was John Bums MP who used the term "liquid history" to describe the River Thames - Burns said , "The St Lawrence is mere water, the Missouri is mere muddy water, but the Thames, well the River Thames is liquid history".
(something we all need to remind the Americans)

Jim noted that insuide the soon to be demolished Woolwich Post Office is a 'a splendid First World War memorial dedicated to all Woolwich postmen who fought and eight men who died'.

At Shooters Hill near Christ Church is the covered memorial seat to Samuel Edmund Phillips, of Johnson and Phillips the Charlton electrical contractors. Over the seat and drinking fountain it records of Phillips
"Write me as one who loves his fellow men"
Posted by M at 18:02 No comments:

The latest edition of Historic Gas Times carries on its front page an article by south London based gas historian, Brian Sturt, about one of the most important innovations carried out in the Victorian gas industry locally:

Today, bonus schemes are very much the norm, but over 120 years ago was there a choice? A 'Co-Partnership scheme' was first inaugurated by the South Metropolitan Gas Company in 1889 at a time when industrial relations were quite tense and workers had been on strike. The Governor of the South Met, Sir George Livesey introduced the scheme in an attempt to ensure that the gas supply was maintained without interruption.

This scheme gave workers a bonus on wages a percentage of the Company profits, which was held on deposit as shares and gained interest - as an alternative to joining a trade union. From this beginning, 'Co-Partnership' as it became known, developed steadily over the years and by 1908 twelve gas companies operated a similar scheme for their employees. This expanded and when nationalisation of the industry came in 1949, approximately 40 to 45% of employees in the industry were Co-Partners.

From the basic bonus payments at the start,many gas undertakings, depending on the company encouraged employees to become shareholders, elected worker-directors and provided a wide range of social and welfare facilities. The South Met also included discounted gas and formed a building society called 'Metrogas' which was in existence until 1984. Some undertakings published their Co-Partnership Journals, now a major source of information on the more social aspects of the industry for we historians.

For a period until the First World War, the South Met also sent out Christmas Cards - as shown in the illustrations. These record the number of employees in the scheme at the South Met and in 1904 this was 5,001 with over £230,000 invested - equivalent to about £12,000 per employee at today's values.
Brian Sturt

Historic Gas Times is available by subscription. please leave a message here if you would like details of how to contact the editor. (or via Institution of Gas Engineers)

PS - I also hope Brian will not object to me saying that the South Met. Co-partnership scheme was the subject of my M.Phil. Both he and I have a vast amount of material which could be made available to anyone seriously interested in the subject. However - family historians beware = this does not include personal details of participants. Please get in touch with either of us if you would like to know more
Posted by M at 16:43 2 comments:

Dona Haycraft has written to us saying..

I wonder if there is any reference of where John Haycraft had a dock allegedly in Rotherhithe and whether there is any trace of where Thomas (he of the halfpenny) had his business in Deptford's Broadway or whether it was flattened in the bombing of the Broadway in WW2.

The GIHS Webmaster says: According to the Bonhams site, the Haycrafts were a family of shipbuilders, prior to 1700 in Torbay, then subsequently in Rotherhithe and Deptford, Joseph was part of the family business, by then a company of ironmongers fitting out ships in the Viturlline Yard in Deptford. In 1795 his brother, Thomas Haycraft famously coined his own token, the 'Haycraft Halfpenny' which bears the legend 'Payable at Tho's Haycraft's, Deptford'.

I clearly must come to Deptford. Any suggestions of the best places to start? The links between Lewisham/Deptford/Greenwich are confusing to someone in Suffolk!

We have received the following information about documentation of Elliott Brothers Lewisham - who made electronic equipment on the site now covered by Tesco. We hope to have Mr. Bristow as a speaker some time next year.

"The history of this Company which moved to Lewisham from central London in 1900 is fairly well documented though not in a single volume. Bulletin No 36 of the Scientific Instrument Society includes articles by Dr. Gloria Clifton, Head of Royal Observatory at the National Maritime Museum and by myself. Additionally I have published articles on this Company in subsequent issues of this Bulletin. I delivered a lecture on the Company History to the 2002 Summer Conference of the Institution of Electrical Engineers at Greenwich University and to the Lewisham Local History Society, amongst other organizations.

I was employed by Elliott Brothers in technical and management positions until retiring from Rochester. After the closure of the Lewisham site I took responsibility for the Company's Historic Collection and Archive. These collections cover documents from 1795, and instruments from 1840, to the mid - 20th century. After being exposed to risks of disposal and dispersal, they were taken in by the Museum of the History of Science at Oxford where they are accessible for academic and general research.

The present collection at British Aerospace Systems plc at Rochester to which you refer consists almost entirely of aircraft electronic equipment produced by Elliott Brothers and its successor companies at Rochester. It is not open to the public. The web site uses unacknowledged historical information from the sources given above.

I should be happy to answer questions or to provide information about the Company if required.