Midgie Dolphin - the girl who trained with Merryweather's 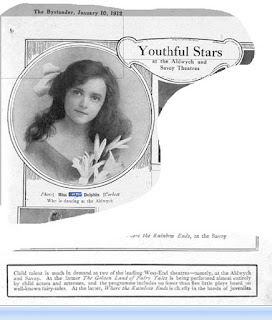 Miss Midgie or Midge Dolphin (once given confusingly as Dolphni) appears to have been ‘trained’ for appearances in films involving ‘stunt’ or ‘action’ sequences at Merryweather& Sons.

She would have met the famous and flamboyant company boss, James Compton Merryweather. In 1912 he was aged 72 (and had five years to live). JCM, as well as a fire-fighter, engineer and businessman was a considerable publicist for his fire-fighting equipment and fire engine company Merryweather& Sons. Known as ‘The Fire King’ he placed thousands upon thousands of newspaper adverts, wrote signed letters to newspapers and almost certainly, with editors’ approval, placed many newspaper articles he had written himself, to keep the company name in the public eye world-wide.

As for Midgie/Midge Dolphin, the ‘training’, rehearsals and the photos and publicity, would have kept her, and the company, in the news. Did she initiate the visit(s) to Merryweather’s (in Greenwich, London), or her father or someone with a view to her career, or James Merryweather himself? Was she accompanied in the visit? JCM and his staff were accustomed to training provincial private fire brigades, including ones for schools and ones exclusively women. But he would surely have taken a decently reserved pleasure in the company of a 13-year old ‘film actress’. 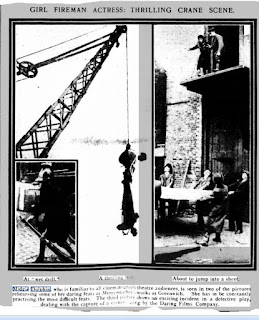 Here are the newspaper clippings I found, all related to stage appearances..…can we find what film(s) Midgie appeared in, beforehand, or later (benefitting from her Merryweather training)? Did her career lead anywhere?

The clippings and other sources indicate that she danced at the Aldwych in Jan 1912 in five small plays collectively known as ‘The Golden Land of Fairy Tales’, and in the same year 1912 she was the fairy Mustardseed in ‘A Midsummer Night’s Dream’ in the play revived by Sir Herbert Tree at the Gaiety, Manchester. (Stage Yearbook)

She appeared in ‘Theodore and Co’ aged 16 in 1916. She was the daughter of the stage manager of ‘Daly’s’, whose name I don’t know [see below], although there was a chap called Wilfred H Dolphin, an actor, who may have been relevant. 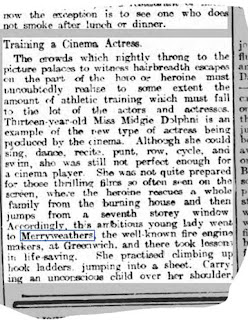 Daly’s was a Leicester Square theatre where ‘Vue West End’ now stands, at no.2 Cranbourn Street. It was the last theatre in the Square to be demolished, in 1937, in favour of the oncoming ‘picture houses’.


…see cuttings below, from ‘British Newspaper Archive’I seem to have exhausted the information on Wikipedia and the Internet….

Also no trace of her in ‘Encyclopedia of British Film’. At that time actors were not highly paid and considered on a par with electricians and mechanics. Films, which would of course have been silent and black & white, were often destroyed and recycled for their silver content.

Daily Mirror 6 Feb 1914
(Please note the precise wording – do we trust the Daily Mirror?) So far no luck (speaking as an engineer) in identifying the crane, or whether it belonged to Merryweather’s.

Further looking finds references to her in The Stage 20 Apr 1911 p.19 as Mustardseed; The Tatler 8 Nov 1916 with photo and her drawings, Sunday Pictorial 26 Nov 1916 with pics and Daily Mirror 11 Oct 1917, with pics, where aged 18 she married Major Edwards RGA (Royal Garrison Artillery). Maybe she then gave up her acting career…?

I can tell you a little more about Midge. She was Margaret Flora Stuart Dolphin, daughter of a couple from Manchester, Walter and Matilda Dolphin, who had evidently moved south shortly before Midge was born at Catford in 1900. Her father was a musician, and he was obviously keen to put his whole family on the stage, not just Midge. 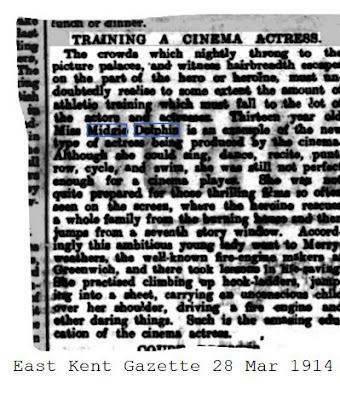 The Dolphins evidently moved around. They were in Fulham by the time the 1901 Census, and in a boarding house in Lambeth in 1911, and, though she was a south-east London girl by birth, I don’t know where Midge would have been living when she used
Merryweather’s premises to practice her stunts. But with JCM keen to make sales in the theatre world it looks like a smart move on his part. (Around the time of 1914there were few if any new installations of Merryweather theatre safety curtains, perhaps as a result of the oncoming cinemas, until the Shakespeare Memorial Theatre, Stratford, in 1932).

As for what became of her later, all that I know is that she married a second time, in 1938. Sydney Burnet Edwards had served in the South African Horse Artillery before transferring to the RGA, and incidentally at some point he was awarded the Distinguished Service Order (DSO), though I’ve not found any report of how he earned that award. So, if he was South African, it may be that they spent the 1920s and 30s in S Africa, and as far as I know S African historical records aren’t easily available anywhere. If she did maintain her career there ought to be some kind of press records of that, but I haven’t looked and I wouldn’t know the best way to do it.

What is clear enough is that in Islington in 1938 Margaret F S Edwards or Dolphin married Charles H Cartwright. No reason to assume she was a divorcee – I assume Sydney had died. And I notice that at Crosby in Lancashire in 1940 the birth of a child Michael Y Cartwright was registered with the mother’s name given as Dolphin; I can’t find a newspaper notice of that birth (nor of the 1938 marriage), and there’s no proof that’s Midge and Charles, but I think it’s more likely to have been them than another couple with the same names.

I hope all that is interesting. It would have been nice to round off the record for you by finding an obituary for Margaret F S Cartwright, but I haven’t found anything. 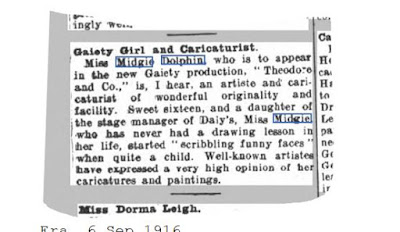 • Midge’s birth; we learn later that she was actually born in Nov 1899, but a bit of a delay in registering a birth isn’t unusual.
• Her marriage to Maj Edwards.
• Her marriage – under the two surnames – to Charles Cartwright – in 1917 and 1938 the index gives all three initials, and that’s how I’ve been able to identify her in the birth registers and the 1901 and 1911 censuses too; but with three forenames myself I’m not surprised to see the third one went missing in later records!
• The entry from the national population Register taken in England & Wales in September 1939, for 152 Widdenham Road, Islington; it’s hard to know which of them is being described as incapacitated.
• An entry from the National Probate Index; the matching entry in the death register index for the Colchester registration district tells us that this Margaret Flora Cartwright was 62 years old, which fits with what we know of Midge.

I’ve no idea who the woman who administered her estate was. It doesn’t look as though her life after marrying Maj Edwards was as glamorous as we might have hoped – but you never know, ‘dresses etc’ might have been haute couture, and she might have bestowed a fortune on her nearest and dearest before she died. But I suspect not.

b   10 Nov 1899
d    7 Feb 1962 age 62 as Margaret Flora Cartwright, then of Frinton, – effects  £130/16/0
Neil also add 19th June 2020
Billed as 'Madge Dolphin' and starring with Warwick Buckland, she was in 'Prop's Angel', made in 1913. The film, of shorter length than we are used to today, was made by Cecil Hepworth and written and directed by Edward Hay-Plumb.
Midge's other film, referred to in the Daily Mirror piece, was 'Detective Daring and the Thames Coiners' made in 1914 by the Daring Films company, where she starred with Harry Lorraine. It was directed by Sidney Northcote.
Cecil M Hepworth's film company became bankrupt and his remaining film negatives were melted down for their silver content to pay the receiver, in 1924. Midge's earlier film did not survive either.
Thank you to Melanie Williams, Lawrence Napper, Tony of Celluloidtapestry and especially Janice Healey and again to George Dyson for guidance and information.
Regarding Midgie's ‘training’ at Merryweather's, it would have had to be very superficial and supervised. Some girls’ schools of the time had ‘jumping sheets’ and practised with them in case of fire. But jumping sheets are no longer used by British or European fire brigades as they are dangerous and waste fire-fighters’ time in vital seconds. ‘Hook ladders’ were very dangerous even to trained firemen when used for their intended purpose and are no longer used. A Merryweather motor fire engine of 1914, which the Mirror claims she practised on, would have been difficult and potentially dangerous to start, and likewise to drive, even if only round the works yard. Only six years earlier one of the company’s motor fire engines was in a fatal accident while being tested on the road.
But long live Midgie's memory, and do visit the cafe in Connaught Avenue, Frinton where she lived in later life!

Message to all Members and Friends

Dear GIHS Members
This is to let you know that the meeting scheduled for Tuesday 14 April WILL NOT TAKE PLACE. Because of Coronavirus we have cancelled ALL MEETINGS until after the summer.
Your GIHS committee will continue to monitor -- as far as we can -- the industrial heritage of Greenwich. We will be grateful for any input you can offer. We will remain concerned about and alert to planning applications on industrial sites, the demolition of the gas holder, the Charlton and Woolwich sites with recent planning enquiries, the Arsenal, Deptford Creek and so on.  We appreciate any assistance you can give in these difficult times. Please keep your eyes open and let us know about anything we should know about.
Because we have had to cancel the programme for the beginning of 2020, we are going to waive all subscription fees until the end of 2021.
In the autumn of 2020, so long as the pandemic is over, we plan to come back with an exciting programme of talks, running through until summer 2021.
Meanwhile we have been thinking about the venue for our events, but we'd welcome your views. The Old Bakehouse benefits from easy access by public transport, but is limited in size. Do you have any suggestions of alternative locations? Would anyone enjoy afternoon sessions? Would anyone like us to record sessions or even transmit them live by YouTube, Facebook or some other medium?

"While we are not having meetings we are still very busy on-line and are always happy to publish items of news on our Facebook page - and look forward to comments and discussion on items which appear there.  Longer articles are more than welcome for the GIHS blog.  You will also be glad to see that we also now have an Instagram and a Twitter account'.  Please send items to marymillsmmmmm@aol.com   indhistgreewich@aol.com

Facebook: https://www.facebook.com/groups/1549240565122658/?ref=bookmarks
Instagram: https://www.instagram.com/greenwich_industrial_history/
We shall continue to be in touch with as many of you as possible via email. We know there are some of you who do not use the internet and therefore may not see this email. If you know of anyone like this, please let them -- and us -- know.