All that was left of it

The local South London gas company, South Metropolitan, made many appliances - cookers among them.  I would be grateful if someone could confirm, or otherwise, if they were made at their Norman Road works in Greenwich.


ALL THAT WAS LEFT OF IT. 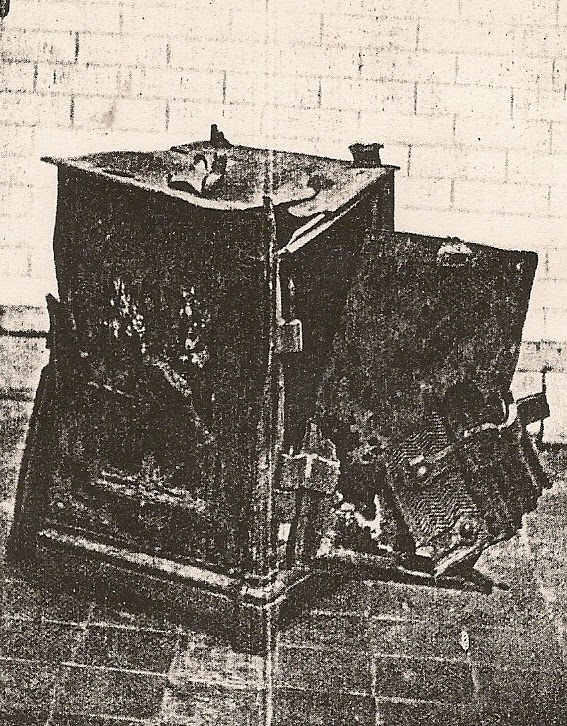 Our picture shows  "Metro. 2' -one that has been returned to the Stores after a career of unsurpassed brilliance. This cooker has been through a conflagration on the premises in which it was fixed, and, remaining at its post like the hero of Mrs. Hemnns' ballad, has emerged in the condition shown. The cast iron has been melted by the intense heat, which also fused a portion of the slag-wool packing.

Prospectus for a Deptford Pier in 1830

This is the prospectus for a Deptford Pier Company set up in 1830 - as you will see - a lot of it might sound familiar - and the people involved have all got quite a bit of 'previous'  and - er- interests in the Greenwich Railway. Please look at the last couple of paragraphs for all the wonderful things they intend to build, having cleared away some unsightly dwellings.

Visit to the Excalibur Prefab Estate, Lewisham - go while you can


On 15th March, in superb spring weather, a splendid two hour organized walk took place round the estate. There was scant publicity but an embarrassing number of people turned up - from as far afield as Scotland. Despite much press publicity about bulldozing, it turned out that almost no prefabs have actually been demolished, so far.  Areas have been cleared of their occupants and groups of empty prefabs are now hidden behind black hoardings, but they are almost all still there.


On this estate there were two types of prefabs and six, in the most original condition, have been listed grade II. Lewisham Council have complained that English Heritage is irresponsible. The Excalibar estate is in poor condition and the land is urgently required to build new homes for needy and deserving people.


Some residents love their prefabs; they remember the old slogan - popular at the time prefabs were built -  'an Englishman's home is his castle' and are determined to stay. The Estate still has a bit of its old secluded atmosphere. It is relatively traffic free and as well as roads, pedestrian walkways run between some of the bungalows. Pay a visit while you still can. A prefab museum has been opened at 17 Meliot Road SE6. See:

A steam lorry made in Greenwich

THE THAMES IRON WORKS CO. LTD, Greenwich
In the early 20th century the great Penn works on Blackheath Hill was taken over by Thames Ironworks - the shipbuilders based on Bow Creek, who built the Warrior and many other important ships.  They used the Penn site to build steam motor vehicles. The following piece describes one of these.
Please note - this piece has been scanned from a photocopy handed to us, the source of which is not known and which has no identifying features.  If it is your copyright - or you know whose copyright it is - please let us know.  If it is, it can be removed from this site at once or a credit given.   Even better would be more information and maybe the picture which clearly once accompanied this.
"This is a five ton design of wagon designed  'To comply fully with the requirements of the Heavy Motor Car Order.' Unlike many designers of the period the Thames wagon had the undertype compound engine with cylinders 3.7/8" & 6 ½ " x 6" set across the frame and with the two crankshaft pinions engageable with the spur ring on a counter- shaft. This countershaft was extended outside the oil-tight casing to the bevel driven differential gear on the back axle, the bevels giving a reduction of 1 :4·6. At 450 r. p m the engine developed 30 b. h. p. Both cylinders had normal slide valves and the crankshaft was 2 1/4" diameter.

"Steam was generated in a locomotive type boiler containing 32 tubes 1 3/4" dia. the heating surface totalling 50 sq. ft with a grate area of 3 sq. ft.   The exhaust steam was passed through the ash pan to deposit any moisture in suspension and then through a heating coil in the smoke box. This was to render the exhaust practically invisible".

"Standard channels 6" x 2 ½”  were used for the chassis framing and cross braced. Rear main springs were 'four feet long with secondary springs above them two feet long permitting a large movement but well damped. The fore-carriage mounting the front axle was in effect a rectangular frame pivoted at its centre thus providing three- point suspension. Steel wheels 3' 2" dia x 9 1/2" tread were used for the rear and 2' 911 dia. x 5 1/2" tread for the front on a wheelbase of 10' 3". "


"Other main features were an external contracting brake on the spur ring on the countershaft, wood block brakes on the rear wheels and a water tank holding 120 gallons mounted beneath the rear end of the framing. The unladen weight of the five-tonner was 4 T 10 cwt and four to five hundredweights of fuel were carried. If desired an extra two or three tons could be taken on a trailer."