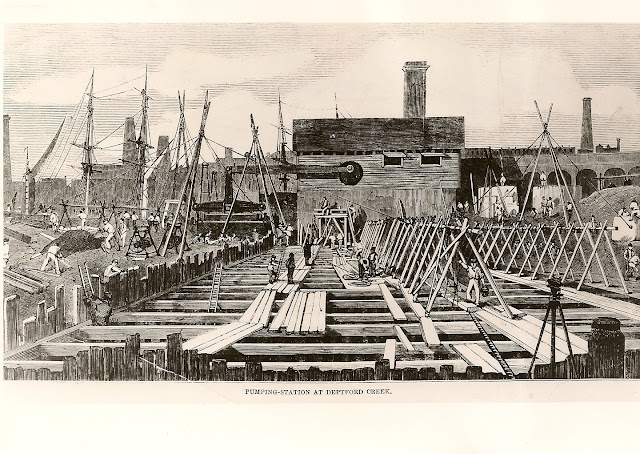 
- the pumping station of course being the one which now stands in Greenwich High Road - and which Diana spoke at length about in her report
Posted by M at 11:25 1 comment:

How a German architect upgraded the Royal Laboratories

The current English Heritage Research News carries an article on German involvement in the Royal Laboratories, Woolwich by Peter Guillery.

(for the full text of the new Survey of Woolwich - available for comment http://www.english-heritage.org.uk/professional/research/buildings/survey-of-london/woolwich/woolwich-volume48/ )

Peter first describes how barricades erected in Dresden's Republican uprising of 1849 were said to be of a quality not seen before in street fighting. This has been attributed to supervision from Gottfried Semper, the Head of the Department of Architecture in Dresden's Academy of Fine Arts, and architect of the city's opera house and art gallery. The rebellion was crushed, and Semper forced into exile, aged 45. A year later he arrived in London.

Semper first years in London were, apparently not happy – Peter says he "fell into impecunious depression’ but he got a government appointment, as Professor of Architecture through Henry Cole – the man who set up the Great Exhibition and, as a result, the V and A.

The Royal Arsenal,  like the Royal Dockyards was moving into the use of steam ­power but work on this was slow. The Royal Laboratory itself was housed in buildings from the 1690s and “was the target of the first major mechanising reconstruction” Building design was usually handled by Royal Engineers and the job was given to a Capt. Thomas Bernard Collinson, RE who had previously helped map Hong Kong and New Zealand

The Royal Laboratory buildings still stand in Woolwich and for many years have been separated in the way they originally stood. However in the 19th century there was a covering over the quadrangle between the two and Peter continues with the plans for this in 1853. “An area about 300ft by 138ft was to be covered on a grid of ninety cast-iron columns for a vast openplan steam-driven ammunition factory with a north-lit 'saw roof' and around 500 lathes”. Collinson sought help and was advised to write to Semper – who came to Woolwich and took on the job.

Peter says that Collinson's letters to Semper, survive in Zurich, and indicate that Semper was given responsibility for the entire form in detail of the iron frame and roof. Ironwork was supplied by Benjamin Hick and Son of Bolton and the factory was hastily erected. He goes on “The frame here was robustly moulded with octagon-section columns, as in the Crystal Palace, which Semper knew intimately and admired, though he deprecated the spindliness of iron in other contexts. The north elevation was eccentrically ornamental, with reliefs of cannon in the spandrels and a circle-pattern frieze depicting ammunition under a cornice bearing the initials of members of the project's committee”.

Semper moved to Zurich in 1855 “and his Royal Laboratory frame had become an archetype. It was the model for numerous later iron-framed workshops at the Arsenal, even into the 1880s. Some of these still stand. Semper's factory continued as the Royal Laboratory's main machine shop until after the First World War. It was not taken down until the 1970s”.

Woolwich Antiquarians newsletter is always of great interest with frequent industrial history items. The following are extracts from the conservation report – with news of many interesting buildings in Woolwich. The following version has picked out the ones with some industrial background, (well sort of) and been edited a bit.
AN UPDATE ON CONSERVATION MATTERS
Woolwich Stadium Site -The Antiquarians have been concerned about this site on Woolwich Common for a long time – and can GIHS appeal for information about the Stadium and what went on there.

So – the Antiquarians say:
Car parking at the Queen Elizabeth Hospital - In 2005 the Queen Elizabeth Hospital sought to turn the Stadium site on Woolwich Common into a staff car park. We objected, as the Stadium is on Metropolitan Open Land. Over the next year or so the objection was considered, eventually reaching the Secretary of State of the Department for Communities and Local Government, whose decision was in favour of the proposal. Now, in spring 2012 with the imminent Olympic shooting events causing closure of Ha-Ha Road and general disruption, work is in hand. The Stadium is being covered in tarmac with kerb stones put in to define the parking spaces.  The bank around the arena is being kept – and now shorn of several years’ overgrowth the Stadium's bank stands proud again.
Castlewood Day Centre (on Shooters Hill).  This closed some time ago, and has been converted to housing with a new block behind it. The frontage of the main building looks splendid, the roof renewed, brickwork fettled, and the foundation stone spruced up.  It was the first hospital in the district, and began as the "Woolwich and Plumstead Cottage Hospital", its foundation stone laid by the Duke of Cambridge in 1889.
Government House by Woolwich Common, long empty, is to be converted to flats with new housing behind.
Crossrail Station - Berkeley Homes are to use it as the foundation of their proposed shopping precinct, with tower blocks of flats near Verbruggen's House.
Verbruggen's House has been blighted by a huge sign visible from the Plumstead Road, erected without planning permission. It advertises a firm of solicitors - the current occupiers of the building. The Council demanded, months ago, that it be removed within three weeks, so presumably it has gone to appeal.
lexander McLeod House and the mid 1930s Art Deco Co-Op Building opposite it in Powis Street, both originally RACS buildings, are to be restored. Alexander McLeod House, the RACS Headquarters (also named the Central Premises) is to become a Travel Lodge Hotel and will incorporate the older Bakery building behind. The ground floor will revert to shops.
The Art Deco Co-Op is to be converted to housing again with ground floor shops. Internal stair-rail supports, which feature "Co-Op" in a design that ascends the stairs, will be retained. We hope the beautiful Dining Room on the top floor will also survive.
Posted by M at 15:05 No comments: