When Woolwich stopped off in Woolwich 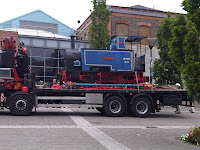 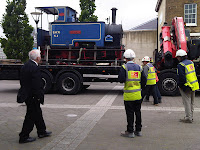 Two pictures of this mornings brief stop off for Woolwich in her journey between Waltham Abbey and Crossness.
Woolwich was one of the locomotives which ran on the internal railways of the Royal Arsenal in Woolwich (when the Arsenal was the Arsenal). She was later run as part of a preservation scheme in Devon and then acquired by the Royal Gunpowder Museum at Waltham Abbey. She is now to be exhibited and used as Crossness Engines.
Posted by M at 13:31 No comments:

Woolwich comes to Woolwich on Wednesday May 18th 2011

The Crossness Engines Trust intends to construct a narrow gauge railway. Crossness Pumping Station is adjacent to the former Royal Arsenal and thanks to the good offices of the Waltham Abbey Royal Gunpowder Mills Trust it has been possible to secure the surviving 18 inch gauge equipment from the Royal Arsenal Railway System. It's expected that an initially modest line will be operating within two years and it's very much hoped that it will re-create the former RAR as closely as possible.

Between 11.30pm - 12.00noon 'Woolwich' will arrive at the Royal Arsenal for display between the Greenwich Heritage Centre and the 'Firepower' Museum, about four or five minutes walk North of Woolwich Arsenal station. The loco will remain there for 60 to 90 minutes. All are most welcome to see her return home. She will then depart for Crossness.

Unfortunately the public cannot be admitted to Crossness Pumping Station on Wednesday but she will be on display there during the next public steaming day on Sunday 26th June. After that date she will be dismantled for restoration.