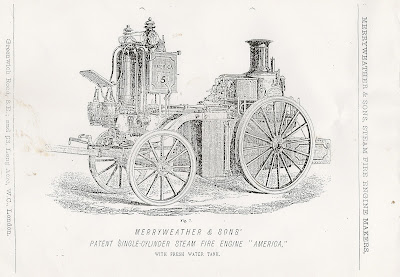 This class of Engine is one of Messrs. Merryweather and Sons’ SINGLE CYLINDER STEAM FIRE ENTGINES specially designed and built for the Santiago, Valparaiso, Iquique, Lima, Callao, Coquimbo, Guadeloupe, and other fire departments of South America.
The general construction of the Engine is upon the well known principle peculiar to the makers, and is mounted with a Merryweather and Field Improved Boiler, capable of raising steam from cold water in eight minutes from the time of lighting-the fire.
In addition to the usual fittings supplied with the ordinary Engines, this class of Engine is fitted with a copper water tank, fixed underneath the framework of the Engine. This tank will contain enough fresh water for two hours' supply to t he boiler, it being essential to feed the boiler with fresh water when the Engine is used for pumping salt water for fire-extinguishing- purposes. This tank is fitted with a glass water gauge and a funnel for filling with brass cover, with other suitable fittings. The feed pump and injector, with both of which the Engine is furnished, derive their source of supply from this tank.
The wheels of the Engine are made with extra broad tyres to protect the wood rims, which are of tank or hickory; the hubs or locks of the wheels are of iron, polished, and fitted with gun-metal caps. Immediately over the steam cylinders is a tool box for the Engineers’~ tools, oil can, cotton waste, nozzles, etc. Two pressure gauges are fitted on front of the tool box, one indicating the steam pressure in the boiler, and the other the water pressure in the pump.
These Engines are arranged to carry only the coachman in the Front with two ”look-out" men (one at each side of the coachman).  Behind they are constructed for carrying the stoker and engineer for which purpose there is an iron foot-plate and hand rail, so that the boiler may be fired en route to its destination.
The boiler is fitted with spring-balance safety valve, and extra locked patent spring safety valve. In the Front part of the Engine is another tool box to carry the larger tools, which is surmounted by a polished bell. The Engine is fitted with a pair of polished brass lamps with the number of the company engraved on the glass. two extra lamp sockets are provided on the box, so that the lamps may moved to throw a light on the engine when in work at a fire; and in front, immediately under the driving seat , are a couple of other buckets for the general use of the engineer. Although the Engine is shown in the illustration with a pole and sway bars for attaching a pair of horses, it is sometimes supplied with an iron hand pole and drag rope for use when drawn by men.
The Engine is made in three sizes, the smallest one having a straight frame instead of the curved ones shown in the illustration.
Throughout, the Engine, in addition to its first-class finish in the working parts is handsomely appointed.
The frames are of polished angle iron or steel, or handsomely painted, -
The boiler is mounted with a highly-burnished brass lagging and chimney casing.
There are extra steam and water gauges to the boiler, so that the engineer and stoker can see their respective gauges without moving from their posts.
The wheels have polished hubs and are elaborately painted and gold-lined on their felloes and spokes.
The tool-boxes are of polished mahogany, or of mahogany painted and lined in gold.
The bell is polished, and handsomely engraved with the name, number, or arms at' the brigade.
The air-vessels are of copper, burnished; and the pumps are of gun-metal or phosphor bronze, highly finished.
The buckets are of leather, painted and lettered, and the tools are all of polished steel. The Engine throughout is of the best construction and material.
By means of "dividing breechings" each Engine will pump three or four jets of water simultaneously.
PATENT SINGLE-CYLINDER STEAM FIRE ENGINE-"AMERICA”

The following articles are included with each Engine:-injector with Tank complete  Pressure Gauges Feed Pump, Feed from main Pump, one Copper  Strainer, four Copper Branch Pipes (two long and two short). two supports for branch pipes, six gun metal nozzles, four handsome brass lamps with reflectors, water bags for wheels, engine hose and suction wrenches, shifting wrench, stoking irons, Oil cans, spare valve facings, and gauge glasses, and sway bars for horses, hand pole and ropes, complete without suction and delivery hoses
Printed instructions for working-and keeping Fire Engines in order are sent with each Engine.
NOTE: for use with Steam Fire Engine leather hose is preferable to either rubber, lined canvas or plain leather hose as it Iasts many years and can be easily repaired if injured at a fire. Canvas hose cannot be repaired with facility neither is it serviceable for hard and rough usage as it is quickly damaged by over rough roads, flint walls, and slate roofs.
Extra for improved Lever Brake to act on both hind wheels, £10.
Greenwich Road, S.E.; and 63, Long Acre, WC London.

Merryweather - the early days of the firm before they arrived in Greenwich
1666 onwards - (Great Fire of London: After slow recovery and reconstruction, the town gives increased attention to fire precautions; virtually nothing had been done for five hundred years)


1799 – by this time predecessors of Merryweather supplied black jacks (leather tankard ‘bottels’) and coal buckets to the Greenwich Hospital.

1829 Braithwaite & Ericsson make the first steam fire engine, but it was not adopted for public use. Parts of their engines probably used to make the Novelty for the Rainhill Trials. Moses Merryweather  is described as Managing Clerk to Hadley & Co, Long Acre.


1834 - Moses Merryweather assisted at a fire at the Houses of Parliament, An experimental Braithwaite & Ericsson engine worked well at this fire. 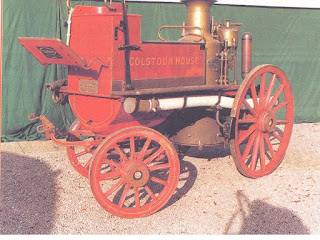 Thanks to the Siemens Engineering Society we have an update - extracted from their new booklet - about what is happening on their old Woolwich site from the perspective of the Society.  Thanks to Brian Middlemiss who wrote and published the following piece (very slightly edited). Copies of the original are deposited at the Greenwich Heritage Centre

A few newsletters and stuff have turned up over the past fortnight, not much, to be honest.

Lewisham Local History Newsletter.  Really this edition is all about Forest Hill, and like places in Lewisham which even I can't argue are really in Greenwich! There is a note about a Heritage Exhibition on 10-17th October at St.Mary's Church, which will cover some of the joint history when in 918 lands in Greenwich and Lewisham were left to St.Peter's Abbey in Ghent. There is also an appeal for speakers on local history items at Manor House Library  on Wednesday mornings (info Robert.Tamplin@Lewisham.gov.uk)

GLIAS Newsletter - This includes an article by Peter Butt on Millennium Mills - its not in Greenwich but you can see it from Greenwich!  Otherwise - they list the following meetings which might be of interest:
17th February. GLIAS lecture. Father Thames, Still alive and kicking. The Changing Role of Thames Wharves.  David Hilling. Swedenborg Hall, Barter Street, WC1 6.30
18th May. GLIAS AGM  The Gallery, Cowcross Street, EC1
4th November. Trinity Buoy Wharf  by Eric Reynolds. Docklands History Group, Museum in Docklands 5.30 (well, again, you can see it from Greenwich)
- and also - Danny Hayton and Andrew Turner's Greenwich Peninsula walk last Saturday seemed to go very well.  I understand it took over three hours to get round - and that they were advised by Elizabeth Pearcey at Enderby Wharf with piles of Enderby Group leaflets.  On the walk was a visitor from Germany  - Barbara Gasometra Berger - here to look at our gasholders, and hot on the heels of a previous visitor with similar intentions from Finland.  So, welcome, to Barbara, and glad she described our massive East Greenwich No.1. holder as 'adorable'.

Beale of East Greenwich - Elizabeth Pearcey has shared with us an article from Newcomen Society Links (which is on a members only website).  This is by Bob Carr and talks about the rotary engine patented by Joshua Beale who had a works on part of the site  of Enderby Wharf in the early 19th century.  It is illustrated with a copy of part of his patent.  Rotary engines are an interesting subject and Bob is hoping to put forward the view that they were a more common and more long lasting design than has previously been thought.  More about the Beales in due course.
Links also a note about the Enderby Group, its work and links to recent publications by Stewart Ash. 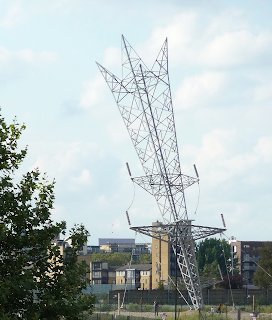 and - hope you have all been down to see Bullet from a Shooting Star.  It is on Point Wharf, by the way, not the gas works or any part of the gas works site.  It claims to be reminiscent of industry on the Peninsula - do we think that is so?  And do we have any thoughts on what is clearly a triumph of structural engineering??


and - for thoughts on the 19th century telecoms revolution - try http://www.scrambledmessages.ac.uk/