In 1883, the Morden CollegeTrustees, then being drawn from the Aldermen of the City of London, had a shift in policy and they sold to the South Metropolitan Gas Works, the freehold of two parcels of land comprising almost 13 acres for £27,000.

One was in the middle of the peninsula and the other was to the northwest, close to Blakely’s Ordnance factory.  The northern area had a river frontage and was mainly wasteland.  The central area had grass-lands, two market gardens (covering 8 acres), 17 cottages, a row of unfinished buildings and a stable yard.  This was the first land the Trustees had sold since the Wricklemarsh Estate in 1708.  This decision to sell was to have a lasting impact on the development of the peninsula and on industrial relations for all the companies operating on it.

The gas works was built under the direction of its chairman, Sir George Livesey (1834-1908).  Before construction could begin, many tons of clinker and heavy rubble were dumped onto the land in order to stabilise the marshy ground.  The gas works eventually occupied most of the east and centre of the peninsula, stretching for around 1.2 miles (2km) from Blackwall Point, southeast towards New Charlton, and covering some 240acres (0.97km2). 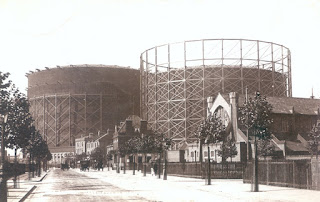 George Livesey was a complicated man who had followed his father Thomas Livesey (1807-71) into the company in 1848.  He was appointed General Manager, then Chief Engineer, before becoming Chairman of the Board in 1885.  Livesey prided himself on his company’s relationship with its workforce and the working conditions that were provided for them.  However, in 1889 he chose to go to war with the newly formed National Union of Gas Workers.

The Greenwich Peninsula survived relatively unscathed during the First World War, with the notable exception of the damage caused by the Silvertown Explosion.

This disaster occurred at a munitions factory in Silvertown that was manufacturing explosives for the World War I military effort.  The blast occurred at 6.52pm on Friday, 19 January 1917, and was caused by the ignition of approximately 50 tons of trinitrotoluene (TNT).  73 people were killed and more than 400 injured; in addition, it caused substantial damage to properties in the surrounding area.  Reports at the time indicated that the explosion blew the glass out of windows in the Savoy Hotel,and almost overturned a taxi in Pall Mall.  The fires could be seen in Maidstone and Guildford, and the blast was heard up to 100 miles (160km) away, including Sandringham in Norfolk and at a number of places along the Sussex coast.

The TNT plant was destroyed instantly, as were many nearby buildings, including the Silvertown Fire Station.  Much of the TNT was in railway goods wagons, awaiting transport.  Debris was thrown for miles around, with red-hot chunks of rubble causing fires.  Many thousands of pounds worth of goods was destroyed in nearby warehouses.  The blast range was later estimated by the Port of London Authority to have spanned 17 acres (7 hectares).  Up to 70,000 properties were damaged, with 900 near to the centre of the blast being beyond salvage.  Estimates of the cost of the damage ranged from £250,000 to £2.5million.

On the Greenwich Peninsula, there was some damage to the buildings on the Wilkie & Soames site, but the worst damage was reserved for the Gas Works.  The gas in the No.2 Gasholder was ignited and it was wrecked completely. No.1 Gasholder was also very seriously damaged.  This caused a massive fireball, which rose thousands of feet into the air. In addition, a large number of slates were torn from the roofs of the buildings and many windows were broken.

Those present in the offices of the works on the eastern side of the site stated that:

‘The report was terrific, the floor appeared to heave and the building rocked.  This was followed by a blinding glare seen through the Venetian sun-blinds, and lasting several seconds, during which it seemed to be as light as day outside. The glare ceased, and the north-eastern sky was suffused with the glow of a tremendous fire.’
The gas holders were repaired and put back into operation as a priority, because gas was still the dominant form of domestic, and more importantly, industrial lighting; it was essential to maintain this for the war effort.

A major change to industry on the peninsula was brought about by the 1948 Gas Act, under which the Labour Government nationalised all the gas companies in the British Isles and South Metropolitan became part of the South Eastern Gas Board.  The Gas Works continued to dominate the peninsula until the discovery of oil and gas in the North Sea. Then the site became redundant, finally ceasing production in 1976.  The site then lay derelict until the 1990s when redevelopment began.

GREENWICH COUNCIL HAS LAUNCHED A CONSULTATION ON THE FUTURE OF THE REMAINS OF THE HOLDER AND ITS SITE.

Link to the consultation 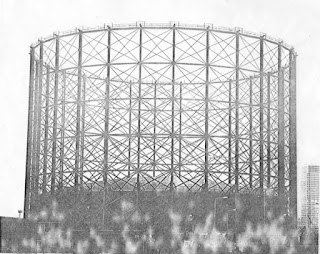 
The gas industry in South London, beginning around 1820, had developed as a chaos of small competing private companies. Regulation was imposed on them by governments from the 1870s – partly following parliamentary lobbying by George Livesey.  This resulted in the area being dominated by Livesey’s South Metropolitan Company from the Old Kent Road. East Greenwich works was built in the 1880s as the out-of-town mega works which the government wanted to be built but it was also a show place for Livesey’s ideals and standards. Only perfection was good enough for South Met.!
(More about Livesey below) 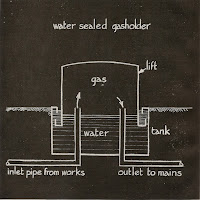 The simplest description of a gas holder is to imagine it as a  cup sitting turned upside down in a saucer which holds a pool of water. The cup is built in a tier of sections which can lift and fall according to the internal pressure

The East Greenwich holder is one of a series designed by George Livesey which he began at Old Kent Road at what was originally the main works of the South Metropolitan Company and where he developed his ideas.  Of this series few remain.

No13 Gasholder at Old Kent Road has now been listed.  Built in 1879-81 it’s frame was the first built on George Livesey's revolutionary cylindrical shell principle which treats it as a single huge cylinder. There are many other revolutionary aspects to the design and materials and while the structure appears to be simple it is in fact very complex and very different from the older, often highly decorative, holders.

The holder also needed a greater numbers of lifts – the tiered and telescoped sections inside the frame - to raise the volume of gas which it could hold.  Thus it is far taller than would normally be expected. It has four of these ‘lifts’ and is the first holder ever built to this size. It rises to about 180 feet and holds 8.2 million cubic feet of gas.

The great height of construction was made possible by new materials and it effected a great saving in cost which had a huge subsequent effect. Part of Livesey's success derived from his many improvements in design making it more efficient and lighter.  Costs of storage were also less in terms of landuse and labour - and workers could be encouraged to go to church on Sundays even though Sunday dinners had to be cooked.

The holder is free of all extraneous decoration and it thus sets a new bench-mark for gasholder design of which it is a refinement in size and sophistication and an exploitation of the beauty of pure structural form. Ideas then being embodied in industrial and domestic design as the modern movement.

WHY IT ISN'T LISTED AND PROTECTED

Some years ago English Heritage commissioned a report on London holders. The consultant recommended Old Kent Road No.13 for listing – and did not recommend EG No.1. or any others. Very recently this report has been revisited and as a result OKR13 has been listed and EG1 consigned for demolition.