From Richard Cheffins
In answer to A.D.D.Jenkins query in our last issue (4 -  Sept 2001) on ‘Kamtulicon’.  (NB not Kampultican) is described in the Oxford English Dictionary as ‘Floor cloth composed of a mixture of India-rubber, gutta percha  [the thickened juice of a Malay gum tree] and corn mounted on canvas’.  According to the dictionary, the term, in mock Greek, was first used in 1844, presumably when the product was first manufactured and put on sale.  It must have had a relatively short life as a product since linoleum, which largely replaced it, was patented in 1860.
I have a copy of Mason’s Greenwich and Blackheath shilling directory … for 1852 (Greenwich’s first street directory and not held in the Local History Library).  No Kamptulicon works are listed in Bridge Street, as Creek Road, Greenwich, was then known, but in Greenwich Road (now Greenwich High Road) there is the entry ‘Walter and Gouch, Kamptulicon Floorcloth Works’.  Mason omits house numbers from all streets with irregular numbering (most of them) but the Kamptulicon works were two down from Mumford’s Flour Mill in the direction of Greenwich town centre with a timber yard in between.  There may have been other Kamptulicon works, perhaps in Creek Road, in Deptford, or perhaps later on in Bridge Street (the first large scale Ordnance Survey map for the area dates from 1869, surveyed c. 1867).

From Stuart Smith, The Trevithick Trust
I was pleased to see your display at the Cambridge Conference of the Association for Industrial Archaeology.  I wondered if any of your members are interested in or have knowledge of cable making operations in or around the Greenwich area, particularly at Silvertown.

From Paul Calvocoressi
The Great Wheel at Earl’s Court 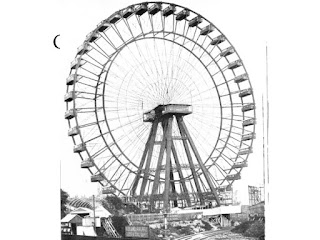 The September 2001 issue of the Newsletter mentioned the piece in the Newcomen Society Bulletin about the Great Wheel at Earl’s Court whose axle and bearings were made by Maudslay, Son, and Field and for which steelwork was supplied by the Arrol Bridge and Roof Co.  It asked whether I could comment on which of Maudslay’s yards carried out the work and whether Arrol might have had any connection with the Appleby Works, which was next door to Maudslay’s site on the East Greenwich peninsula.

My source for the information was the account in Vol.42 of the Survey of London – Southern Kensington: Kensington Square to Earl’s Court, at page 335.  I spoke to my colleagues in the Survey of London team, asking whether their notes for the volume, which was published in 1986, shed any light on these questions.

I am afraid that they do not.  The published information was based on a piece in The Builder, but specialist engineering magazines do not seem to have been consulted.

From Gail Brocklebank Smith
I came across this site via a search engine, while searching for General Steam Navigation, which I am trying to find information on.  My great-great great grandfather, Thomas Brockelbank (1774-1843), was managing director of the company prior to his death in 1843.  I know that the National Maritime Museum holds manuscripts of the company, but living in the United States, I do not have access to them, except to hire a researcher.  Any help in locating information would be greatly appreciated, even a recommended researcher who is knowledgeable of the material.
I have a picture--actually a picture of a picture right now--of Thomas Brocklebank.  My cousin in Liverpool has the original, a print; I think it is a black and white sketch.  He has promised to send it to me.  But the photo came out good and can email it, if you like.
Gail

From John Sofield
Your web site came up, while I was searching for information, and I was wondering if there is anyone in your group that would have any information on Mr and Mrs Arthur and Jessie Sofield, who lived at 181, Creek Road, Deptford.  They were married on the 25th December 1910 at St Nicholas Parish, then migrated to Western Australia.

From Mike Crutchley
Please forgive me for this intrusion, but I am looking for an expert on the history of Maudslay, Son, & Field.

I am currently researching the total loss of the Neapolitan paddle steamer The ERCOLANO on 24th April 1854.  Most on board were lost including Charlotte Knight and her two infant children.  The Ercolano collided with the iron screw steamer SICILIA (Glasgow built) in a storm at night and went down quickly in deep water south of the Bay of Antibes, off the coast of France.  Much is known about the event - but very little is known about the Ercolano.  This is all I have so far:  The Mediterranean Steamship Navigation Company commissioned five new steamers from 1825, one of which was known as the ERCALANO (may be a spelling mistake).  Although The Ercolano is described in 1842 by the engineer JAMES NASMYTH (who I believe worked for Maudslay) as "...a fine new steamer of the Messageries Imperiales line.”  Although there is no evidence of her in the M.I. records.  It is more likely that she worked for the Neapolitan Line out of Naples.  Her standard route was coastal from Palermo in Sicily to Marseilles via Naples, Civitavecchia, Leghorn and Genoa.

I believe she would have been designed very similar to ships such as JAMES WATT or SOPHIA JANE.  Possibly 200 to 300 tons, schooner rigged with single funnel and twin paddles.  She was known to carry 50 passengers on the night, but had in the past carried 250 passengers on deck.  But what I do know is that her engine was by Maudslay, Son, & Field.  This gives me hope in finding evidence of her existence.

Was Maudslay building ships at that time i.e. 1825 or 1842?  Would there be any record of Maudslay supplying a marine engine to another shipbuilder either on the Thames or perhaps in Glasgow?  I don't think she was built in Italy, but would Maudslay have contracted to supply engines in the construction of the five MSNC steamers, CAPRI, VESUVIO, MONGIBELLO, ERCO(A)LANO, or MARIA CHRISTINA between 1825 and 1830? To find out about her engine design and drive would be fascinating.

I am writing a detailed piece on the event for an American/Canadian family history society.  Later I have to give a talk in London Ontario (not directly on the event, but the Ercolano will play a small part).  And I know little about paddle steamers and steam engines, hence my cry for help!  Pictorial evidence of the Ercolano would be a positive bonus!  The SICILIA had 300hp engines and I wonder whether Maudslay would have supplied them in 1854.  Ironically, she later sank before her second 'maiden' voyage, north of Palermo.
Any clues?

From Elsa Meier
While surfing the net for an elusive relative I came across your wonderfully informative newsletter.  It was nearly as good as being there. I am chasing a ggg grandfather James Bond (I am not kidding!)  Who is said to have died in 1896 at or in or on St. Olaf/Olave.  He was in the merchant navy.  Is there a person there who would look up information for me on the off chance that I might hit pay dirt as us Aussies say?  If not it was still interesting to read your page.

From:  Paul
Do you know of any web cams looking at the barrier - the search facility on ‘google’ looked like you had some
on the history site.

From Jane Cox
I have just come across your site, I am wondering if you may be able to help me -  my gr gr grandfather Edward James Amos was at Woolwich arsenal as a writer/painter.  His father, Edward, was also painter at Royal Woolwich Arsenal.  One of them had something to do with designing the statue of Florence Nightingale.  I would Interested to know if you know anything about this statue.  I have little to go on I would welcome any advice on books on the history of the Woolwich Arsenal or addresses I can write to.

From Liz O’Connel
A web search landed me at your site.  My mother was a Bilbe and her family were shipbuilders in your area.  Is there any information on them available?