June next year will mark the 150th anniversary of the opening of the first submarine telegraph cable between England and India.  The cable was built and operated by three companies founded by John Pender (1816-96), the Anglo-Mediterranean Telegraph Co Ltd (1868); the British-Indian Submarine Telegraph Co Ltd (1869); and the Falmouth. Gibraltar and Malta Telegraph Co Ltd (1869).  The system ran from Porthcurno via Lisbon and Gibraltar to Alexandria, then across Egypt to Suez and on to Bombay (now Mumbai) via Aden.  The cable station at Porthcurno would become the most important communications centre in the British Empire and is now a world class museum https://telegraphmuseum.org/.  The Museumis planning a series of events to mark this ground-breaking achievement, and as part of this they are hoping to track down the whereabouts of two watercolours.

The shore end of the cable to Lisbon was landed by the SS Investigator on 6 June 1870, and the final splice was made two days later, completing the link to Lisbon.  With the line in operation, on 8 June John Pender was in the cable hut at Porthcurno to dictate the first test message sent over his system to Bombay.   Both these events were captured by the artist Robert Charles Dudley (1826-1909).https://atlantic-cable.com/CablePioneers/Dudley/index.htm Dudley presented both of these watercolours to John Pender shortly afterwards, and they became two of his most treasured possession.

In 1894, John Pender had a 316-page catalogue of his art collection printed by Bradbury, Agnew & Coand published by Whitefriars Press of London. The catalogue was entitled Pictures, Drawings and Sculptures forming the Collection of Sir John Pender GCMG, MP. A copy is held in the Paul Getty Museum in California,and it can be viewed on line here: https://archive.org/stream/picturesdrawings00unse#page/n181/mode/2up/

The two watercolours are listed in the Arlington Street collection as shown here in the catalogue: 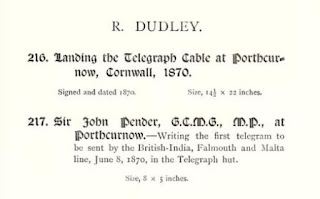 After the death of Sir John Pender GCMG MP, on 7 July 1896, the vast majority of his art collection was sold at auction by Messrs Christie, Manson & Woods in their auction rooms at 8 King Street, St James Square London. 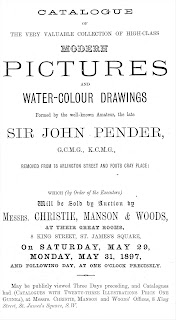 From Pender’s collection as listed in the Bradbury & Agnew catalogue, 66 paintings were held back by the family, among which was the sepia wash of John Pender in the cable hut.  Christie’s records indicate that the Investigator painting, Lot 147, was purchased for ten guineas by ‘D.G.’;unfortunately Christie’s cannot confirm who D.G. was.   This ends the established history of this painting.  Regrettably, no images of it have been found to date, but it is almost certain that it was the basis of the engraving that that was published in the Illustrated London News,on 25 June 1870, for whom Dudley was a Special Artist. 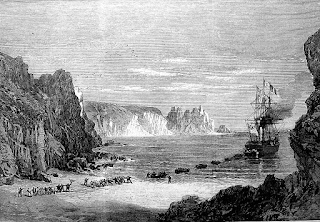 The Cable Hut watercolour was retained by John Pender’s son, John Denison Denison-Pender (1855-1929), and an image of it appears in the Jubilee Edition of the Eastern Telegraph Co Ltd in-house magazine Zodiac in August 1922.  This company was founded by John Pender and his son John Denison was then its chairman. 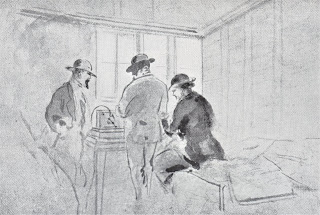 After the death of Sir John Denison Denison-Pender GBE KCMG on 6 March 1929, the contents of his London residence, 6 Grosvenor Crescent, were sold at auction by Hampton & Sons of 20, St James’ Square, London S.W.1 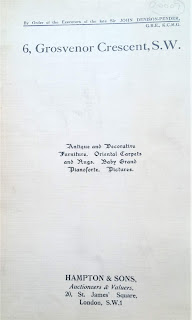 The contents were sold off room by room and Lots 300 & 301are catalogued as paintings by Robert Dudley:

Again, no images were included in the sale catalogue, and the descriptions are too vague to be sure what these paintings were.  It is possible that Lot 300 is the Investigator, although the description is ‘Ships’ and there is only one ship (but several boats) in the Investigator painting.  This would mean that John Denison-Pender bought the painting back from D.G. or that D.G purchased it on his behalf. It is also likely that the cable hut painting is one of the seven in Lot 301.

The Telegraph Museum Porthcurno would be keen to hear from anyone who can assist in the current location(s) of these two important Robert Dudley watercolours.  If you can assist in any way please contact the Museum’s Director Julia Twomlow julia.twomlow@telegraphmuseum.org