A REPORT BY JACK VAUGHAN

This expressive title stands for the new Museum of the Royal Regiment of Artillery which opened with a considerable bang on May 27th and 28th.  It is located within the Royal Arsenal, Woolwich. 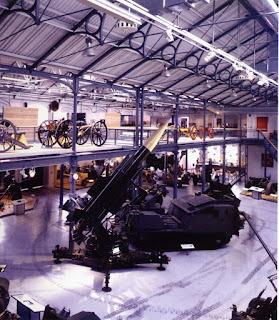 It is important to differentiate between the Museum and the Royal Arsenal site.  The latter, until 1967, housed the Royal Ordnance factories, namely the Royal Gun Factory, 1716, the Royal Laboratories, 1696, The Royal Carriage Department, 1805, The Royal Filling Factories and the Mechanical Engineering Dept., responsible for all machinery on site.  At its maximum the site extended from Woolwich Town Centre eastward to the present site of the Crossness Sewage Treatment works with a greatest width of a mile.  The much emaciated remains are now open to the public but are mainly enclosed in dreadful blue hoardings behind which a leading property developer seems to be reducing most of the remaining buildings to what seems to be rubble for what some would see as charmless residences.

The Museum will eventually occupy four or five listed buildings of which one is in full occupation and open having in its past been a paper cartridge factory, a bomb shop and a metallurgical laboratory.

The founding of the Museum had its origins in 1985 when concern was expressed within the Regiment, the first two companies of which were raised around 1716, about the conditions of the guns, medals, books, archival records and artefacts, of which deterioration was somewhat advanced.

A study was organised; the outcome of which was the suggestion of a large new Museum to cover the above items, these being then held at the Royal Military Academy and the Rotunda Buildings at Woolwich Common.  The suggested site was, near Stonehenge, at the School of Artillery in Larkhill.

At that time Greenwich Borough Council has published a Development Brief for the Royal Arsenal site including seventeen listed buildings, plus others of some interest.  The potential cost of putting a suitable building on a green field site ruled out Larkhill and the local sentimental links with the Royal Regiment and the Royal Arsenal resulted in the earmarking of certain listed building therein.  This seems to the writer to have been a logical outcome from the start.

Thus arrived opening day.  It was even to my jaundiced eye a remarkable turnout.  Just for the two days the Museum was part open free and the site proper was open for strolling, including the river path.  Fairground equipment, bouncy castle, coconut shies, beer tens etc etc abounded.  Military band marching was superb as were the firing displays.  Re-enactment displays, pikemen, musketeers, etc. were exceptionally interesting and appropriate, echoing the 17th century Civil War.

Inside the Museum’s principal building we witnessed by eye and ear a quite incredible display of Firepower.  I shall not try to describe it – members should try if for themselves.  Four film screens showed 20 minutes of artillery actions of various dates, and the accompanying explosive noises were loud enough and smoked realistically. Nostalgic background music is used also but I noted two ommissions on that front.  Dame Vera Lynn’s voice should be heard and the marching song of the Afrika Corps. Adopted by the Eighth Army - need I say its name?
I hope this scant report will persuade you to visit.  Further buildings will be opened in due course- and the Medal Collection is of course, a must.

This report appeared in the July 2001 GIHS Newsletter