We are receiving a number of articles and information about engineer William Lindley - some of it is in a posting on the GIHS Facebook page.

Lindley - when he wasn't designing public services in Europe - lived in Shooters Hill Road.  Here is an article which Blackheath historian, Neil Rhind, wrote about him in 1998:
WILLAM LINDLEY


There simply is no shortage of erudition when it comes to the research and writing of books, which also prove to have a Blackheath interest. And because of my local knowledge there is also no shortage of scholars and researchers beating a path to my door, eager to clarify a reference and seek what little information I might have on their pet subject. They then embarrass me with fulsome thanks in prefaces for very small contributions indeed.  In fact, I should thank them because without such investigation I would know very little of the importance of all sorts of unlikely things.

Take the drains for example.  There are few things more pleasing than a clean drain except the act of unblocking it and watching the water run freely away with a satisfying gurgle.  That is what was not happening in London and most European capitals in the first half of the 19th century.  The Romans knew what to do but their successors managed to forget the techniques.  As cities grew larger and larger so did the problems.

London was quite frightful with the Thames and the small rivers, which flowed into it, being used as the main sewer and, quite often, as the source of drinking water as well.  Such was the smell that even members of Parliament in the House of Commons were appalled and, on occasion, unable to continue their work.

So it was decided that the long-suffering rate- and taxpayer would meet the cost of solving London’s drainage and sewer problems.  Also, the Thames in central London would be embanked.  And embanked it was.  Under the inspiring leadership of engineer Joseph Bazelgette London was properly drained as well.  It was a massive civil engineering undertaking and created one of the, lasting wonders of the modern world, and still in use to day.  Walk the London embankments at Charing Cross and visit the giant Crossness engine house at Belvedere and you will see what I mean.

The volume under scrutiny concerns something rather similar but in Warsaw, Budapest and Prague.  These ancient capitals also suffered from drainage and water problems.  It took an Englishman (more properly Englishmen) to sort things out.  They were the Lindley family, resident of No 74 Shooters Hill Road from 1860.

I knew, from short biographical notes, that they had been up to their elbows in European drains, so to speak, but I put much down to personal hyperbole. Not so – and it took a visit from Professor Ryszard Zelichowski, of Warsaw, hot on the trail of these wondermen, to banish my ignorance.  He is the Dale Porter of the Warsaw water and drain systems and had learned that the Lindleys were Blackheath people.  You could have knocked me down with the proverbial feather when he explained to me how distinguished they were.  And last year Ryszard published a special volume to mark the 110th anniversary of the Warsaw water supply works.

It all started with engineer/architect Joseph Lindley (1806-1880) who moved to Blackheath in 1860.  His brother William (1808-1890), in the same profession, “rebuilt” Hamburg after the fire in 1842 and then earned an international reputation as a water and sewage engineer, sorting out Warsaw in the 1870s.   His sons, William Heerlein and Robert Searles carried on the good work, ensuring happy healthy populations across the Continent, designing and supervising water and drainage schemes in Prague, Bucharest, Frankfurt, Petrograd, and so on. They were rarely at home. William snr’s daughter, Julia, lived on at No 74, keeping house for the family, until her death in 1937.  It is also extraordinary, in the local context, that old Joseph had married the daughter of Michael Searles (1752-1813) the architect, inter alia, of the Paragon.  William Heerlein Lindley was knighted in 1911 and lived at No 17 Kidbrooke Park Road for a short while during the Great War.

Of course, I would like to say more but, alas, my Polish is scant. Nevertheless, Prof. Zelichowski tells me that the volume he sent to me is the shorter popular version and that he is working on an extended version, which he hopes will be published in English in due course.  At least I think I know what the szluzmajster did and the word filtro, cisnien and pomp seem to have a familiar ring about them.

You will have to send to Warsaw for Ryszard Zelichowski’s volume and I am not sure how many zlotys you will need but I can make enquiries.  Professor Porter’s definitive tome will be issued here in due course and for those details I must wait.  The publisher is the University of Akron Press, Ohio.  Enquiries to its web site: http://www.uakron.edu/uapress.

the article is Neil's copyright and must not be reproduced.
Posted by M at 18:28 No comments: 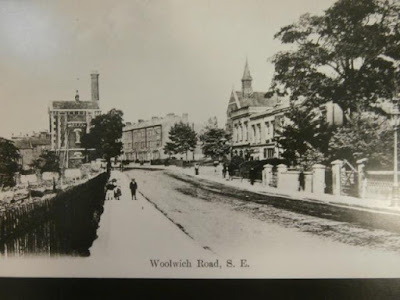 Now only one person got it right - Congratulations Peter Luck - it's Woolwich Road looking east towards the bottom of Charlton Lane.   Here's another picture from some years later 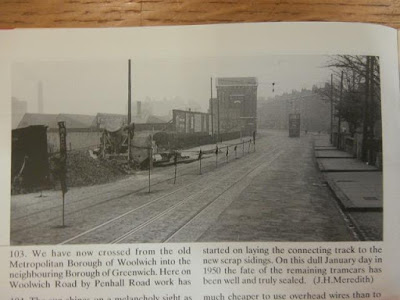 Now, none of you, not even Peter twigged why I thought the picture was interesting.  Well its the big building centre left.  Its a water works building - and this is just the first one - you never knew Charlton had two water works, did you?

The next bit comes from the estimable History of Charlton by the late John Smith.  He says that in 1857 the Kent Water Company dug a deep well at Charlton.  Its actually marked on the 1867 Ordnance Survey Map.  They built this pumping station and installed a pumping engine from Harvey & Co. of Hayle in Cornwall.  But within six years it was taken out of use because the well was becoming contaminated with river water - and a nearby new sewer didn't help. So it was shut down and the engine was sent to the Cold Bath Well at Deptford - that's one of the wells at the Brookmill Site which also was originally built by the Kent Water Co.  The engine seems to have ended up however at the Crayford Water Works, which was rebuilt in 1954.  A history of Crayford says that two statues of Sir Walter Scott were removed from the decorative metalwork on the engine and preserved. Has anyone got them??

So - the earliest of the Charlton Water Works closed down and was let to a building contractor. From the earlier photograph above it appears to be the sort of building you expect of a 19th century waterworks.  In the lower picture it has lost most of its decoration but has had an extension built.  It was then in use by the Grafton Engineering Co.  There seem to be many Grafton Engineering Cos around and this is described as being 'a general engineers and cabinet makers'.