British Deaf History Society  -  recently took part in an exhibition at The Forum, Greenwich (Christ Church).  They have a range of publications – not industrial but interesting, nevertheless.

The Woolwich Ferry – John Burns – is named after the south London politician.  One of our members has pointed out that there is a talk about John Burns at the Wandsworth Borough Museum


Ted Barr has been kind enough to send us a photocopy of a Merryweather’s catalogue from the 1880s  - over 100 pages and its difficult to know where to start.  It describes many of their fire and steam engines, who bought them and what they were used for – this is going to have to be another serial!  Must be careful too since on the front it says ‘Proceedings will be taken against any person pirating this catalogue’.

Merryweather's were fire engine manufacturers based in Greenwich High Road – the factory is still there, used as a trading estate – behind an art deco frontage.  But it is likely soon to be the subject of a planning application for demolition.  The Company had originally been in business in Long Acre in London – and claimed in the 1880s to have been established ‘upwards of 200 years ‘, So, clearly they didn’t start with making steam fire engines! 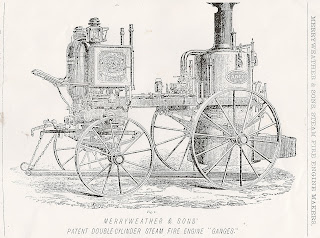 So – leaving the formalities for now – let us take an engine at random.  On page 18 is illustrated ‘The Conqueror’ ‘Admiralty Pattern Patent Double Cylinder Steam Fire Engine.  The first of this class of engine won first prize at Crystal Palace in 1863.  One such engine was the largest Steam Fire Engine in the world ‘La Belle France’ purchased by the Austro Hungarian Government in 1878 along with another.  Conquerors were also bought by the Dockyards at Portsmouth (3), Gosport, Woolwich, Deptford, Devonport (4), Keyham, Chatham (2), Kiel,  Wilmershaven, Don Pedro, Rio de Janiero and Dantzig.  Wigan Corporation bought ‘Le Empereur’ in 1868, and others went to Dacca Twist Mills, Tomsk, Valparaiso, and a Russian Mill.

What was thrown in for the price included the feed pumps, lamps, water bags, engine hose, oil cans and – oh yes – sway bars for the horses.  You pumped your water by steam power, but you took the equipment to the fire by more traditional methods!

The Guide Magazine
The November 2001 contains an edition of Peter Kent’s ‘River Watch’ but (shame on you, Peter) he has abandoned Greenwich for an article on the Pool of London.  All good stuff, though.  In the same edition, Neil Rhind writes on ‘Lost Horizons’.  .  About an older, greener, Blackheath.

Crossness Record
(Autumn 2001 Vol.7.No.5.) More ‘News from the Octagon’ – our local steam museum.  ‘Prince Consort’ now has most of his ‘topworks’ finished and work is now concentrated around the cylinder.  All six sets of valves are being refitted to the ports – having been refurbished at Crossness’s own workshop.  The barring engine is undergoing its second restoration.  The chimney erection is now completed and much of the ancillary equipment in the new boiler room, has been installed and steel pipework fitted.  The concrete bunded area to the east of the Triple Expansion House will be the cooling pond for the new steam system.  The final section of engine house arcade next to Prince Consort is almost finished and the cast iron floor panels and been returned.  Some windows to the west have been unboarded and there is now much more light coming in.  The old steam and machine tools display space has now been converted to a new lecture theatre – to a very high standard and looks magnificent.  The whole visitor centre is now undergoing reorganisation.

Woolwich Antiquarian Society Newsletter
October 2001 gives details of a ceremony to mark the opening of the newly refurbished gatehouse of the Cambridge Barracks in Francis Street.  Views from it are said to be ‘glorious’ and the rooms are to be for community use.

Henry Maudslay 1771-1831 & Maudslay Sons and Field Ltd.
We have been very kindly sent a copy of this booklet published by the Maudslay Society in 1949 to mark the establishment of the Maudslay Scholarship.  This gives so much information it is difficult to know where to start – extracts will be included in future editions of this work.

Bygone Kent.
Vol. 22, No.9.  Contains an article by Mary Mills on ‘Greenwich and Deptford Copperas –The Final Years’.  This concerns extracts from the diary of Elizabeth Pearson, sister of the works owner.  It speculates on relationships with the Millington family in Greenwich and goes on to describe the eventual failure of the Deptford copperas works after 200 years in production.

Vol. 22.  No.10. has a letter asking for details about Ye Olde Sheer Hulk pub which was opposite the main gate of the Royal Dockyard in Woolwich.  The writer is a Mrs. Lingham from Ashford who says that she was brought up next door to this pub and it was believed that it was built of timbers taken from the old prison hulks.

Opening of the Riverside Path

As a local resident, a councillor and a historian I was particularly happy on 17th September.  This was a great day for Greenwich because - at last - the riverside path was opened around the Dome site, and the route between Deptford Creek and Thames Barrier completed.

This section of riverside path has been closed to the public for 120 years, ever since the gas works was built in the 1880s.  Before that, in the 1870s, Greenwich Vestry (Greenwich Council’s predecessor) had fought a long, hard battle in the High Court to keep it open.  Nothing changes - it is only because Greenwich Council went back to the High Court in the 1990s that so much of the path is open today – and thanks to hard work by English Partnerships, it is now open right round the tip of the Peninsula.

Some really exciting new vistas will be opened up to us – across the River is the whole of Blackwall Reach with tales of the days when ‘Blackwall fashion’ were the most important words in world shipbuilding.  We will be able to see where HMS Warrior – now preserved in dry dock at Portsmouth – was built, as well as the monument to the departure of the Virginia Settlers as they went off to found America, and London’s only real lighthouse – today an art gallery.  The path was formally opened by the Mayor – but the real ceremony was performed by the children of the Millennium School who lined up on their bicycles to be the first through the new section.  They were followed by stream of guests on foot – walking, chatting, and looking at the river.  It has taken a lot of hard work to get this path open – the community groups who have kept on reminding us all about it, the council staff who have done such a lot of hard work as well as English Partnerships, who were ultimately responsible for opening it up.  Thank you to everyone – the best thanks though will be to see visitors and locals using the path, seeing the river.

The site now referred to as CONVOYS WHARF is of great historical importance.  It was Henry V111's Royal Naval Dockyard, later the Royal Naval Victualling yard, and then the Foreign Cattle Market before its recent use for import of newsprint for the Wapping printing works of News International

Last year planning permission was sought for site redevelopment, predominantly as an up-market housing estate.  It was opposed by Deptford residents, amenity societies, and the Mayor of London as not meeting local needs, and refused by Lewisham Council.

A new proposal, the outline description of which sounds much more appropriate, has now been submitted.
Tom Sheppard

On October 14th, the annual exhibition of vintage vehicles was expanded to include a miscellaneous collection of sub-exhibitions.  From our point of view the most important was advertised as an ‘Industrial Fair’.  Since this could offer an opportunity to raise the profile of Industrial History in our area, we undertook to offer a small display.
We chose a relevant theme based on famous engineers who had some connection with our district.  The space allocation imposed a limit on the number that could be included and this meant that some worthy individuals could not be used.

I shall not give details here other than the names – as I may offer a series of talks on them in small groups.

On the whole, it was a worthwhile under taking although it took two months from first to last.

EDITORIAL NOTE
We really should thank Jack for the  time and effort he put in to setting this exhibition up – we should also thank his long-suffering daughter who provided a vast amount of help and support.

** Jack has provided a list of  13 scientists and engineers who were associated with Greenwich industry and scientific advance.  Clearly there were many more – for example, the  Greenwich based engineer, John Penn, and all the astronomers at the Royal Observatory, for a start.  Please send in names of others– and if you can provide mini-biographies so much the better.  Let’s see how many names we can get, and amaze everyone!  We might even be able to publish a book …. or a series of books
Posted by M at 15:59