HOW THE INTERNET WAS BORN ON THE
GREENWICH PENINSULA 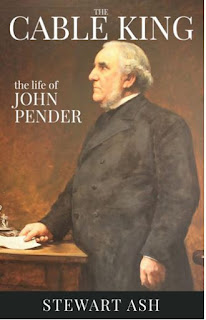 Access to the World Wide Web is only possible due to a vast global network of subsea fibre optic cables carrying terabits of data under the oceans.  This unheralded technology did not grow up overnight, it was more than one hundred and sixty-five years in the making and the Greenwich Peninsula was the focal point of its development.One man did more than any other individual to develop a global communications network and that man was Scotsman Sir John Pender GCMG (1816-96).

John Pender made his first fortune in the calico printing industry in Manchester.His association with Greenwich began in 1857, when Glass, Elliot & Co acquired the Enderby Wharfsite from Messrs Enderby Brothers to armour half of the cable ordered by the Atlantic Telegraph Co.  At that time Pender was a   director and major shareholder in the Atlantic Telegraph Co but had little to do with the 1857 and 1858 attempts to lay a working cable across the Atlantic.

After these failures it was Pender who, in 1864,put up a personal guarantee of £250k to persuade the directors of the Glass, Elliot and the Gutta Percha Co to merge their two companies to form the Telegraph Construction and Maintenance Co (Telcon).  Pender became its first Chairman and oversaw the successful laying of two cables across the Atlantic in 1866.  In 1868 he stood down as Chairman and was replaced by his close friend, Daniel Gooch, but retained his stock holding in the company.  Over the next 28 years he went on to build a global network of submarine telegraph cables that connected the United Kingdom to its colonies and beyond, through a series of operating companies, collectively known as The Eastern & Associated Telegraph Companies.  This company would later become Cable & Wireless.

Pender never gave up his stock holding in Telcon and, whenever his operating companies needed a new cable, it was invariably Telcon that was awarded the supply contract.  From its formation, through Pender’s patronage, Telcon went on to dominate the submarine cable supply industry for the next 100 years.  After John Pender’s death, two further generations of Penders were directors of Telcon until it merged with BICC in 1959.

From 1876 John Pender leased the Palladian mansion of Foots Cray Place from the Vansittart family, as his summer residence.  He died there on 7 July 1896 and is buried in the family tomb in the graveyard of All Saints Church.  The family tomb is marked by a five metres high Celtic cross, which is the only memorial to his memory accessible to the public.

Despite his outstanding achievements, very few people have heard of him or understand the debt we owe to him for the legacy that he has left us.  Now there is a biography of this great man, written with the benefit of access to the Pender family archive.  It is available from Amazon as an e book https://www.amazon.co.uk/s/ref=nb_sb_noss?url=node%3D341689031&field-keywords=The+Cable+King

The cover notes have been written by Bill Burns, one of the world’s leading experts of the history of the submarine cable industry.  They are repeated below: ‘John Pender was a key figure in one of the 19th century’s most important technological enterprises: the interconnection of the British Empire through undersea telegraph cables, a network that Tom Standage has called the Victorian Internet. Pender exemplified the best that the 19th century could produce, he was a hard-working businessman with concern for the welfare of his staff, and who sought public office to speak for Manchester merchants and Lancashire cotton workers during the Cotton Famine. Always a forward thinker, he saw that telecommunications was destined to be the great development of the second half of the 19th century.

Pender suffered personal tragedy when his first wife died just thirteen months after their marriage, leaving him with an infant son. His second marriage ten years later to the determined and enterprising Emma Denison was a turning point both for his family and the Empire. The electric telegraph caught his interest, and his promotion and organization of the companies that laid the first Atlantic cable were a significant factor in their eventual success. In 1869 he established the first of many cable companies which before his death connected Great Britain to all parts of its Empire and beyond. Awarded many high honours from foreign governments, he was finally knighted by Queen Victoria in 1888.

John Pender kept his personal life private and this perhaps explains why there has not been a biography of him before now. The Pender family granted Stewart Ash unrestricted access to the family archives, and this book gives us a detailed account of John Pender’s ascent from his humble beginnings in Scotland. A truly remarkable man, he made his first fortune in the cotton trade, then dedicated his life to the development of the undersea cable industry and its rise to pre-eminence, becoming a Member of Parliament in successive governments in furtherance of his dreams.

John Humphries House in Stockwell Street was the first purpose-built computer centre in Greenwich and the site of a remarkable initiative by local government.

An early UK computer with an electronic stored memory was the EDSAC  machine developed at Cambridge University in 1949. I caught the attention of J. Lyons & Co., who were the managers of a highly successful teashop chain.   They were also innovators of management systems and found that the paperwork of stock control in all of their branches greatly inhibited efficiency. Lyons therefore set about building the first UK computer for business use. It was dubbed the LEO 1 machine; LEO standing for Lyons Electronic Office. It utilised mercury delay lines for memory storage, and ran the world's first regular office job for stock control in 1951. An offshoot company, LEO Computers Ltd., was formed in 1954 to market the technology and LE02 machines were installed in many British offices, including Ford Motor Company, British Oxygen Company and the Ministry of Pensions at Newcastle.

This success led to the invention of the LE03 machine. This machine used panels of magnetic washers to store programs and data. Memory size was limited, and programmers had to show great ingenuity in the direct manipulation of memory in order to contain data. Files were stored on magnetic tape reels and data was entered by completing batches of forms, which were punched onto paper tape. Programs were written in a wholly numeric language called Intercede, and the primitive operating system required a great deal of operator intervention. LEO'S principal benefit was the ability to print forms and tabulations at speeds of up to 1,000 lines a minute.

In 1960 these innovations caught the attention of a Greenwich Councillor named John Humphries.   He was instrumental in the creation of a Joint Committee formed from the then Metropolitan Boroughs of Greenwich, Woolwich, Deptford, Southwark, Bermondsey and Camberwell, and this in turn set about the creation of a computer centre, with the result that John Humphries house was built and officially opened. The development of systems was placed in the hands of the Metropolitan Boroughs Organisation & Methods Committee, another Joint Organisation serving the needs of 28 Metropolitan Boroughs and managed by John Dive. They created a computer division and it was based at John Humphries The first application was Rate Accounting and this was followed by Payroll, General Ledger Accounting, Job Costing, Stock Control, Creditor Payments, Miscellaneous Debtors, Transport, Housing Rents, Electoral Registration, Library Cataloguing and Land Use Registration. Subsequently The Forest and Bexley Hospitals and the Bloodstock Agency also used the services of the site.

A major change took place in 1965 when London Government was re-organised and the centre then serviced the data processing needs of the London Boroughs of Bexley, Greenwich and Southwark. As computing developed it became financially viable for each local authority to create its own computer installation. The need for a joint installation ceased and the use of John Humphries House was discontinued, LEO Computers Ltd merged with the computer interests of English Electric in 1963 to form English Electric LEO, and later, English Electric Leo Marconi (EELM). Subsequent mergers eventually found LEO incorporated into SCL in 1968. And the ICL machine range took over new production.
Posted by M at 19:02 No comments: