A request from Malta from the Government Inspector of Ships for information on Cubow shipyard - active on the earliest part of the Woolwich Dockyard site, now the site for tower blocks of flats. In Malta is a fishing boat called 'Golden Dawn' built by Cubow in 1975. Malta Maritime Authority would like to know more and will pay for research. They would also like to contact Downtown Marine who were later on the site.
Posted by M at 10:03 3 comments:

We have been asked for information about the boat builder Richard Henry Harding who was at work at Wood Wharf in the 1800s. It is known that Harding married into the Corbett family who had previously owned the yard, and took it over in due course
Posted by M at 14:37 No comments:

More about Gilbert’s Pit and Maryon Park. A correspondent tells us that when walking the site recently he saw what is though to be a piece of primary iron slag protruding from the chalk face about 1 m below the top. This indicates a major iron works on the site which is possibly pre-Roman
Posted by M at 14:37 No comments:

We have been sent a pre-copy of the Archaeological desktop study on Maryon Park in Charlton – and clearly this is with special reference to Gilbert’s pit. As ever with these things it’s all about archaeology not industrial archaeology – nevertheless past industry could hardly fail to get a mention here. Very early on the authors note ‘throughout history these sand and gravel deposits have been exploited. Some mineral deposits may have been quarried as early as the Roman period and after the establishment of Woolwich Dockyard in 1512 sand was used for ships ballast .. in the 18th century major digging began to obliterate the site … demand for moulding sand, glass sand ….. The lowermost layers of the Thanet sands, black-foot or strong loam, were excavated for brass casting moulds while above them beds of larger grained and less cohesive mild loam were used for iron castings. They note limekilns in Blackheath Hill and Charlton Church Lane. (Much of this quotes Paul Sowan and attributed him, wrongly, to GIHS rather than is actual base in Croydon.
The study moves on to sites of prehistoric occupation and notes signs of flint workings – maybe our earliest industry! Later evidence is found of iron and copper slag and baked clay as well as loom weights from Roman times.
The authors note a sand quarry in the area mentioned by Hasted in 1797 and sand pits and quarries shown on maps of the early 19th century. In the 1830s two lime burners are listed in 1839 at New Charlton. This document has been produced in conjunction with works planned here by the Council and we look forward to more detail on this.
Posted by M at 14:37 4 comments:

Mind out for the boundaries

GIHS regularly receives copies of The Local Historian published by the Journal of the British Association for Local History. As ever there is little about London and its industries, however an article in the August 2008 edition on parish boundary markers has caught my eye. The article mentions parish outings which used to take place to ‘beat the bounds’ and some of the antics mentioned reminded me of an article in an old Greenwich Antiquarians Transactions (Vol. IX No 4 1982) where there is a description of beating the Greenwich boundaries in 1844 - which includes, for the industrial bits of Greenwich, a description of the civic procession Vicar, churchwardens, local school kids etc etc – who started off down Church Street to Garden Stairs, thence through Brewhouse Lane, the Gallery, Wood Wharf (having a waterman passing up the centre of the river at the same time). Through Mr. Tuckwell’s premises, through Mr. Martyr’s yard, passing over planks to the river wall at the back of the Gasworks, thence on to the edge of the wharfing, over barges and planks into Mr. Burford’s premises. Thence through Mr.Walton’s to the centre of Creek Bridge where three cheers are given for the Queen and the parish of Greenwich. …….. then on across planks and boats to Deptford Bridge where the Hundredth psalm was sung. At the Waterworks a man swam the river to the marker post in Shepherd’s garden. Having continued through the Silk Mill.. . and so on. They stopped for lunch at The Sun in the Sands on Blackheath and after that entered the Countess of Buckingham’s brew house passing out of her laundry window into a large oak tree where the parish treasurer had the honour to be bumped against a stone – and so on right round the parish until they got back to the River at Lombard’s Wall at Charlton, where they continued by boat. The whole thing took eight hours.
Does anyone know of any parish markers in the Borough? Is this something we should be looking out for?
Posted by M at 14:37 No comments:

- and now - this wonderful picture from Barbara. Not sure its industrial history - but!! Barbara who are this daring young couple on their amazing machine! and is that Pelton Road.
(any help on enlarging this picture without distortion from a techie somewhere would be welcome)

More of Barbara's pictures - where are they of? what's the date? 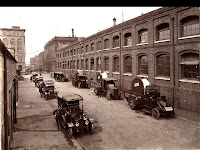 Barabara from Charlton has sent the following picture. Any comments please??

The Historic Gas Times comes out four times a year and always features something about the great (and recently much maligned EAST GREENWICH GASWORKS. The current issue features an article by Tony Coles on his work in the 1960s as an Engineering Assistant there. The article describes pressure storage of butane on site and about preparation for its delivery by rail from Grain refinery and includes some 'amusing' episodes which required emergency action!. Enquiries about Historic Gas Times to Bob Winn, 91 Caroline Terrace, Edinburgh, EH12 8QX
Posted by M at 06:33 No comments:

Query from a resident:

Does anyone in your society know the original purpose of the building nowoccupied by the Greenwich Natural Health Centre at the back of 70 RoyalHill? It is a most curious structure hidden away behind Royal Hill andabutting the allotments on what used to be the other railway line coming into Greenwich.
Posted by M at 07:39 2 comments: