In January the Society was contacted by residents and members from the Ballast Quay area who said the cranes on Lovell's Wharf were being demolished.  Enquiries to the Council's Planning Office was met with surprise – but they  later confirmed what was happening and that the owners had not informed the Council of their intentions despite the planned use of the cranes as a feature in the outstanding planning application for the site. Jack Vaughan wrote the following letter on behalf of the Society: 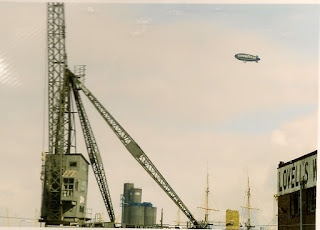 I am writing about the cranes on Lovells Wharf demolished with no notice to Greenwich Council or  the local community.

Lovell's was a working wharf into the mid-1980s when Shaw Lovell left it – having recently renovated the two 'Scotch derricks'. These two cranes have became a local landmark – and were probably the two last such cranes left on this part of the Thames.  Three articles about the history of the wharf by Mary Mills appeared last year in Bygone Kent. The wharf has not been used since the mid-1980s and locally it has been widely accepted that if there was no way it could be kept in industrial use then it was important that a way was found to keep the cranes as a feature –it is felt important to preserve as much of the character of the riverside as possible. 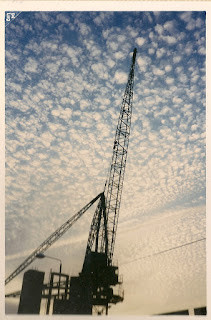 The site is owned by Morden College, who have rented it out on a short term basis to various film companies – which has meant that it has become less secure than it ought to be.

The cranes were demolished by Morden College on grounds of lack of site security – and demolition must have cost a lot more than enhanced security fencing!

A number of organisations and individuals have written to Morden College to protest – and it is quite clear that a great many local residents are also angry at what they saw as their 'heritage' being disposed of. Several local people contacted the newspapers and News Shopper published an article which quotes a Morden College spokesman saying that there were safety fears.  The Greenwich Society is also quoted 'We are angry this happened without notification. Their demolition ruins the heritage and landscape of the area'. It also said that English Heritage confirmed that Morden College were not breaking the law by demolishing the cranes and Greenwich Council had  'expressed disappointment to Morden College about the demolition and that they did not come to us to address their safety concerns'.