A VIEW FROM A STRANGER

In February a party from GIHS visited the Plumstead White Hart Depot. GLIAS’s Bill Firth comes from  Golders Green and knows nothing about Plumstead - here is his report on the site:

White Hart Road Depot was the site of the Woolwich municipal electrical generating station fuelled by domestic rubbish. This ended in the 1920s when the main power station in Woolwich was opened but incineration of rubbish continued in the 1970s. There have been many other activities at the depot until last August when everything except the laundry closed.

At the depot Ian Hornsby who has worked there for some 28 years was a knowledgeable and enthusiastic guide.

The visit started at the main building which is a typical example of end 19th century municipal pride. Its status is uncertain but it seems English Heritage is considering it for listing.  It has been mutilated with partitions, the filling in of doors and electric cables around the walls but enough remains to be able to appreciate what it must have been like in its prime.  At the back we were able to peer into the generating hall and appreciate its immense size and the coloured glazed brick walls from which it is referred to as the ‘tiled hall’.Later when some problems with keys had been solved we were able to get inside. 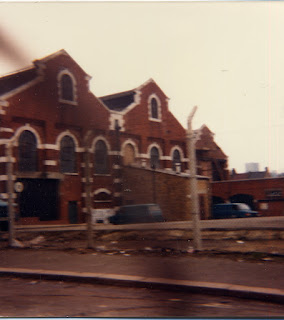 We went on to as storage building where the useful materials, such as copper and aluminium which had been removed from the rubbish by women known as scratchers, were sorted before being sold to dealers.

Round to the front again we went up the ramp up which the dust carts were driven into the unloading area.  The rubbish was fed on to moving belts which went past the scratchers and was then tipped for loading into the boilers.

On the way to the tiled hall we stopped at the one functioning activity at the depot - the laundry.  Here laundry from the elderly of the Borough, and others unable to do it themselves, is washed and dried in massive machines.

We were now able to get into the tiled hall and were able to really see its extent and the attractive coloured glazed walls.  The whole complex has had many uses since closure and has been a storage, or should one say dumping, site.  In the hall we had a discussion about its future. If it is listed it is a good example of a structure for which it will be found difficult to find re-use.

We went outside again to view the full extent of the whole depot.  This seems to be

a candidate for the brownfield housing which Mr. Prescott seems keen to promote.

Lastly Ian wanted to show us the weighing mechanism of the weighbridge but we found it had all been boarded in.

This was a fascinating visit to a site which has long since lost its original purpose but one could still visualise what it had been. 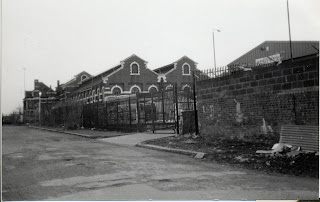 Volume 3, Issue 1m of this newsletter contained some remarks about the White Hart Depot - and a further report was promised.  This is not it!  I felt that some background to the miserable story behind some of the artefacts referred to earlier - and seen on our visit - might be appropriate. In particular the barracks which figure in it.  Red Barracks was (or were?) erected in 1819 as an infirmary to serve the Royal Marines, a Division of which was created in 1805 and eventually quartered in Frances Street in 1847, staying until 1869, co-incidentally the year of the Royal Dockyard closures in Woolwich and Deptford.   On their departure the two barracks were named ‘Red’ and ‘Cambridge’.  A complete history since those times is not called for in these notes but is available on request.  Suffice it to say that both barracks were Listed Grade II.

The history of buildings in Woolwich has always been a red rag to a bull and, in 1973, application for listed building consent top demolish was made by the Council. Permission was refused, whereupon the buildings were ‘let to rot until not recoverable’ , and consequently a second application to demolish was made in 1975. Following a Public Enquiry in 1976 the Inspector recommended consent be granted for the Red Barracks buildings to be demolished but consent for the external railings, gates, gate lodge, and two gun ports at the entrance should be refused. These findings were agreed by the Secretary of State.

Demolition followed, but needless to say, the policy of ‘deliberate neglect by delay’ of the ‘refused’ items continues to this day. The results were evident during the White Hart Road visit.
We have campaigned for some action in this matter since October 1975, the date of our opening shot.

The time since then has been peppered with half promises, never even half carried out, up until the latest situation following on twenty five years of evasion and neglect is that the Red Barracks items and the ‘Entrance Screen’ of Cambridge Barracks (i.e. the Main Gate to Frances Street) are now on the English Heritage list of Buildings at Risk.

The area appears to have acquired its name from The White Hart Tavern which was in a meadow approximately 100 yards from the road near the centre of Kentmere Road. The tavern was burnt down in 1814. Until 1885 the land surround the then White Hart Lane was not built on (from Vincent’s Records of the Woolwich District).

In June 1901 work was started on the generating and refuse destruction works at White Hart Road and were formally opened by the Mayor, Councillor J.J.Messent in October  1903. The cost was £40,000, £2,600 being spent on direct labour. In 1919 the generation was concentrated at the Woolwich Electricity Company near Woolwich Ferry. (from Jefferson. The Woolwich Story).

A reply has been received from the Planning Department in reply to our letter to them raising concerns about the site. For a number of very boring reasons this letter can’t be reproduced in full here.  The gist of it was that - the Council has no immediate plans for the site but intends to develop it in due course - that English Heritage had already shown an interest in the buildings.  We have also been contacted by people who would like to look further at the site and perhaps photograph it in detail.