A couple of months ago GIHS welcomed Jonathan Clarke of English Heritage who spoke about Mumford’s Mill in Greenwich High Road. At the time we promised to publish extracts from his Survey Report on the mill.  We now understand that Lewisham Local History Society intend to publish the whole report - nevertheless we reproduce here the summary to the report and some highlights:

‘Throughout Europe and beyond, the late 19th century witnessed a revolution in flour milling, involving a radical transformation in the technology, work organisation and location of one of the oldest of industries. This changeover from traditional stone milling to roller milling was accompanied by an increasingly ambitious approach to architecture that matched the escalating sophistication and ingenuity of the machinery within; technology and architecture were parallel mediums to be exploited in an ever fiercer commercial environment.  By 1897 Mumford’s Mill boasted a visually arresting and technologically sophisticated grain silo designed by Aston Webb, one of the most renowned and accomplished architects of the era and fitted by Henry Simon, the leading roller milling engineer in the country. 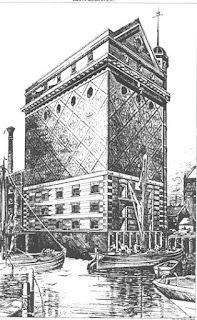 The site of Mumford’s Mill on the south bank of Deptford Creek - the tidal stretch of the River Ravensbourne - represents over two centuries of complex accretive development.  Allegedly built in 1790 as a tidal-powered, timber built flour mill, the earliest surviving components are of brick, comprising an early 19th century site office and two early 19th century three storey stone grinding flour mills, here called the East Mill and the West Mill.   Documented build dates of 1802, 1817, and 1821 may relate to these three blocks. The East Mill which was originally of 11 or 12 bays length, was subsequently raised a future storey and a southern end bay partially rebuilt as a tower possibly housing a steam engine.  The West Mill was also raised a further storey bringing the yard elevations in line with one another. The last of these alterations, which probably relate to the partial changeover to roller milling may tie in with Webb’s first recorded involvement with the mill

The most dramatic change to the complex came in 1897 when a huge grain silo was built to the elaborately Italianate designs of Aston Webb.  Facing the creek and probably relating an earlier granary this edifice exploited advanced techniques of internal metal framing, comprising a grid of rolled steel beams supported at their intersections by cast-iron columns to produce robust ‘fire-proof’ structure. Although little direct evidence of the mechanical plant survives, this was equally progressive: manufactured and fitted by Henry Simon Ltd., whose firm was responsible for the greatest number of roller installations nation-wide.  The construction of the silo was probably accompanied by the insertion of steel-framed doors in the East Mill for the support of heavier roller-milling machinery, and the creation of a larger wheat-cleaning wing, also internally supported by steel members. Twentieth century changes include the raising of the wheat cleaning wing, the adoption of electric power and the construction of ancillary building, including a mess room, smithy and garage.

Mumford’s Mill is of considerable interest for a number of reasons. In the context of industrial history, it provides a palimpsest of structures that document the impact that the late 19th century revolution in roller milling had in traditional practices,. Late 19th century flour mills are an obsolete, properly understood and fast disappearing class of building. From an architectural historical perspective the interest resides not only in relations to the formative development of Sir Aston Webb but as an example of  how the field of industrial building design could attract leading architects more typically associated with ‘polite’ buildings.  Allied to this, from a construction history view point, Mumford’s Mill is illustrative of an emerging narrative which places the take-up of increasingly sophisticated techniques of internal steel framing in the late 19th century anticipating the full steel framing of the early 1900s.

This article appeared in the September 2000 GIHS Newsletter
Posted by M at 20:01