Crossness Pier was the pier from which explosives were shipped, it was serviced by two Transporter type cranes that took their power through cables  reeling onto drums on the crane structure. These were a constant source of trouble with dirt on the slip rings taking the current from the drums. An excitable Maltese voice from the ganger, whose name was Cordelli, meant a trip out to the end of the Arsenal, often in the wet. Andy would keep Cordelli talking while I, surreptitiously, moved the offending drum slightly. Then Andy would go up to the offending crane, wave his arms about and shout strange words whereupon the crane would begin to work again - Cordelli was convinced Andy was practising some kind of magic ! 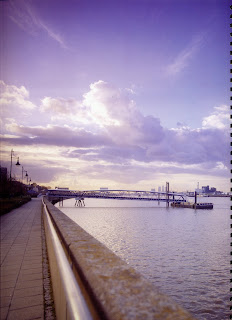 I had a near miss on that pier. A three-phase electric capstan was being installed and I had the job of wiring it up to it’s starter which, for the time being, was hung on the rear of a small wooden hut. I sensed something was wrong and looked round the hut to see a couple of railway trucks heading straight for the hut which straddled the rail tracks. The chap moving the trucks, with a rope round an hydraulic capstan, had thrown the second loop of the rope onto the capstan drum upside down forming a clove hitch which, of course, was self tightening. The inevitable happened, the trucks hit the hut which toppled over onto the starter and everyone on the land side of the pier thought I was underneath.  Fortunately I had nipped out of the way on the river side but it smashed the starter