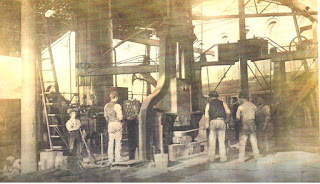 Started by John Penn senior about 1800 this firm originally made such things as cranes and treadmills. The treadmill was at that time a common source of power (often using convict labour) but was soon to be supplanted by steam and hydraulic power which were developed rapidly,. The first marine engine was built in the 1820s but by 1857 the firm was World famous -  having several ships named after them - in this field. On the death of his father in 1843 John Penn Jnr. took over and was responsible for many important developments. In association with Francis Pettit Smith he solved in 1858 the problem of excessive wear of the stem and shearing on screw vessels by the use of lignum vitae. This material is still used on smaller vessels, its introduction enabled the widespread use of the propeller and was the result of a long series of experiments which involved pressures as high as 8000 psi. Engines were built at Blackheath Hill and boilers at Deptford, transport of large engines to the river was by teams of horses on traction engines and must have posed a considerable problem. As well as supplying locally built ships there was a healthy export market to countries who lacked the expertise to build their own engines and boilers. John Penn perfected the compact oscillating engine, several of these were in use on the river Danube until 1981 only being taken out of use because of their high fuel consumption, at least one survives in use on the River Elbe.

The Penn family were well known in public life in the Blackheath area and John Penn was the first president of the West Kent Microscopical Society in 1861. The firm amalgamated with the Thames Ironworks in 1899 subsequently building several of the early dreadnought battleships. Shortly before the demise of the firm in 1912 such products as motor vehicles, electric cranes and electrical equipment were introduced in an attempt to stay in business after the decline of the shipbuilding trade. John Penn & Sons we regarded as being the finest marine engine builders in the World and the name is commemorated by John Penn Street and by the Penn and Widow Smith Almshouses in South Street.