It was with a great deal of excitement that I found recently, while looking under ‘Erith’ on the internet a ship, a real ship, built on the site of the Dome. 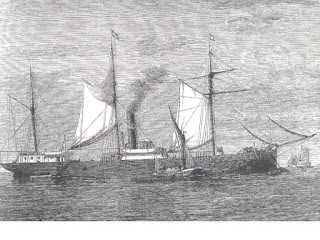 I had known for a long time that there had been ship building on the Greenwich Peninsula and known a bit about the company that built the dry dock (the remains of which have recently been scrunched by NMEC) but I had come to believe that probably no ships of any size had been built there.  The dry dock itself stood slightly to the west of the Dome and was used in its latter days as a reservoir by the gas works. A capstan from it is to be in the new Museum in Docklands. The company concerned was called Stockwell and Lewis and the dock had been built around 1871 (see my article in the latest Bygone Kent).  So, there is was, on the Tasmanian Government Parks’ Department web site at http://www.parks.tas.gov.au/historic/shipw/bulli.html - they had made the very easy mistake of mis-spelling the ship builders as ‘Stackwell and Lewis’.

So, Bulli lies at the northern end of West Cove in the Bass Strait in 16 metres of water. She is said to be remarkably intact and stands 5 meters off the shore. Her bow has collapsed but two thirds of her hull is intact up to the upper deck. Her bridge and engine room are still there, as are the rudder and the stern.  She is seen as a specialist site for leisure diving.

I think this is a very exciting find. I know of no other Peninsula built boats - other than sailing barge Orinoco - which are still with us.  Other short articles on Bulli should appear soon in Bygone Kent and the new GLIAS Newsletter - what I really need is more information.  I have a had great deal of help already and would like to thank Mike Nash in Tasmania who has been more than helpful - and Chris Grabhame who has been trying to ‘grab’ images across the air waves and David McGeorge and Pat O’Driscoll who have both tried very hard to get more details out of the archives.  So far no luck - but we will keep on trying.