In 1887 ‘The Miller’ ran an article describing Robinson’s Deptford Bridge Mill - the following extracts have been sent to us thanks to Chris Rule.
This appeared in the GIHS Newsletter in May 2000

‘The Deptford Bridge Flour Mills are very conveniently situated for flour milling purposes, being connected to the Thames by a tidal dock, navigable for barges, for the reception of wheat.  The proprietors are Messrs. J.&H.Robinson, who have long been known in the trade in connection with the Lewisham Flour Mills.  After the fire on 22nd December 1881 which totally destroyed the mills built in 1870, Messrs. Robinson determined to rebuild on the site of the mill ruins and fit up the plant on the roller mill system.  The mills, which are substantially built, have eight floors, and the building is 92 feet long and 66 feet wide. 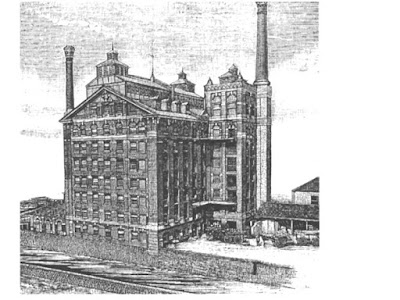 Structurally the building is arranged so as to minimise the risk of fire as far as possible, the warehouse, wheat cleaning department, and the roller mill proper being separated by thick fireproof walls and having no communication with each other, except by the iron galleries outside the building communicating on each floor. Each of these galleries has a communication with the fire alarm and a dial.  On the fire alarm sounding the men make their way to the nearest dial and there ascertain the locality of the fire, to which they proceed taking all the necessary appliances, which are in the recesses of the galleries, to cope with any fire that may occur.  Each gallery is provided with hose connected to the hydrant pipe, which is connected to the stationary fire engine and city main on the ground floor.  Thus the whole of the premises are well guarded in case of fire.By means of the tidal dock, the wheat is unloaded under two lukums direct from the barges into the warehouse and after being well cleaned in the wheat cleaning department, is reduced to flour and offals in the roller mill proper.

The roller mill proper contains two distinct plants, together having a capacity of about 30 sacks per hour.  Each plant of machinery has a separate engine so that if a stoppage occurs by any unforeseen event the whole mill is not forced to be idle.  The machinery of the two plants are arranged on the several floors in the following order:
The ground floor is occupied by the main and other shafting, which drive the roller mills and other machinery on the floor above. On the first floor are arranged 33 of Gray’s roller mills with four horizontal rolls, and three pairs of millstones.  The wheat is broken in both plants by grooved rails on the system of six breaks.  The semolina and middlings are reduced in eight reductions on smooth rolls,  and the ‘flouring’ of the purified dunst is effected in each case on one pair of millstones. On the second floor are ten pairs of roller mills and the spouts conveying the different products from the dressing machines on the floors above to the reducing machinery on the first floor. The spouts are arranged so that an easy inspection of the material can be made.

The first break is effected on this floor by a Robinson’s roller mill, with grooved chilled iron rolls. Partitioned off from this floor is a sack cleaning room and a dust collector to receive the exhaust from the roller mills. On the third, fourth and fifth floors are 60 long silk reels 4½ sheets long. The silk reels are placed 14 in one line and five tiers high, passing through three floors and driven by upright shafts connected to the reels by gearing.

On the sixth floor are ten scalpers for the first, second, third, fourth and fifth breaks and four centrifugals. The purifiers consist of 12 Gray’s gravity purifiers and 26 of Geo.T.Smith’s purifiers, distributed nearly equally between the fourth, fifth and sixth floors.

And on the seventh floor are eight centrifugals, two of which act as scalpers for the sixth break, two ‘shorts’ dusters and four grading silk reels.  Here are five lines of lay shafting, by which means the upright fts of the silk reels are driven. Power is transmitted to this lay shafting by two belts, 21 inches wide, and 150 feet in length.  The top floor is used as a dunst room.

The warehouse division of the mill on the one side, and the wheat cleaning department on the other side, the latter being a quadrangular structure adjoining the warehouse has eight floors and is capable of holding 7,000 quarters of wheat.  The two top floors are utilised for the offals and the remaining floors are used as a granary, containing three flour bins over the ‘Eureka’ flour packers, wheat bins for cleaned and other wheats, and a storing space for wheat and flour in sacks.

The cleaning of the wheat is performed in quite a distinct department, separated from the warehouse adjoining by a thick, fire proof wall, and the cleaning operation is effected by two Van Gelder separators, a Barnard and Leas separator and a small cockle cylinder on the sixth floor, two smutters and 25 Van Gelder scourers, two stone scourers and a cylinder for removing the remaining wheat from the barley product on the fourth floor; two Victor brush machines and a cylinder for separating the remaining wheat from the cockle product are on the third floor. The wheat is then ready to be manufactured into flour in the roller mill proper.  The two top floors of the wheat-cleaning department are used as a dust or smut room, the first floor as the foreman’s office and the second floor as a workshop for doing repairs.  The workshop contains two lathers one of which is 18 feet in length, a saw bench, band saw, vices and smaller tools that may be required for repairing parts of machinery.

The motive power required to drive the two roller plants is obtained from a horizontal compound engine and two beam engines situated at each end of the mill, so that both plants of machinery can work entirely independent of one another.  The horizontal engine, named the Gladstone, has high and low pressure cylinders, 20 in and 87 in diameter and a 36 in stroke. This engine is capable of producing 400 indicated horse power and has a fly wheel 12 ft in diameter. The steam is obtained from three of Davy Paxman’s multitubular boilers.  The two compound engines which are situated at the opposite end of the roller mill, have a fly-wheel 16ft in diameter and are capable of producing 300 indicated horse power.  The steam required to drive these two engines is obtained from three boilers. The wheat cleaning machinery is driven by a separate vertical compound engine of 120 indicated horse power.