Peter Trigg’s note in Greenwich Industrial History last autumn (Vol.2, No.5) on John Penn & Sons prompts me to add a few extra notes.  The firm was started in 1799 by John Penn Snr (1770-1843), a Bristol millwright, originally to produce agricultural machinery.  The first marine engines were, I believe, produced in 1825 and under John Penn Jnr (1805-78), who took over from his father on his death, this, and the marine boilers produced at the firm’s Deptford works at Palmers Payne Wharf, became the firm’s main activity.  The Engine Works were not in Blackheath Hill but in Blackheath Road.  Transport of the heavy engines to the Thames-side was difficult enough as Deptford Bridge and its approaches on the Greenwich side were not widened until 1878-82 under a Metropolitan improvement scheme.  Had the works actually been up Blackheath Hill, the laden horse-drawn wagons could scarcely have negotiated the incline.

In fact it is not strictly true to say that the Engine Works were even in Blackheath Road.  Its main entrance were always in Cold Bath Lane, now appropriately named John Penn Street, and for more than half of its existence it did not even have a frontage on Blackheath Road.  It acquired this in 1861 when the Holwell Charity sold its Greenwich estate to Penn for the princely sum of £21,500.  Shortly afterwards, two rows of houses in Blackheath Road, Cold Bath Row and Holwell Place (wrongly named Holywell Place on some maps), over 30 houses in all, were demolished in the expansion of the works. 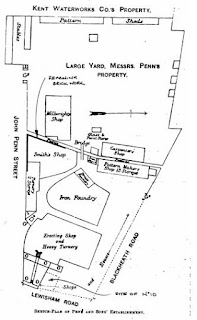 An undated manuscript estate map ‘Plan of an estate situate in the Parish of St. Alphage in the County of Kent, property of the Trustees of the Holwell Charity’ (? late 1830s) shows the restricted site of the Engine Works at that date.  The Penns occupied the large corner house opposite the George and Dragon public house as their residence with a garden alongside the present Lewisham Road back to John Penn Street.  There were some sheds at the rear of the garden (such is the level of detail of the map) but the Engine Works themselves were somewhat to the west of this, separated from it by the gardens of five further properties.  There may have been some limited expansion between the date of the map and 1861, and the factory may have been world famous as early as 1857 as Peter Trigg asserts, but major expansion began only in the 1860s.

John Penn retired in 1875 and died three years later.  In 1884 his widow erected the Penn Almshouses in South Street in his memory, now the John Penn and Widow Smith Almshouses (the Widow Smith Charity was a separate one which merged with the Penn Charity after its almshouses in East Greenwich were destroyed in the Second World War).  The Business was continued by his four sons and was converted into a limited liability company in 1889.  Already a decline was beginning and the merger ten years later with the mighty but ailing Thames Ironworks & Shipbuilding Co. was a defensive measure.  As ships grew larger, the Thames became less suitable for shipbuilding and, although Penn exported his engines worldwide, the bread and butter of the business was the Thames shipbuilding industry.  Some economies could be expected from integrating in one firm shipbuilding and the production of ships’ boilers and engines.  The move was only a short-term success.  Receivers were called in December 1911 and the firm was finally wound up in 1914. 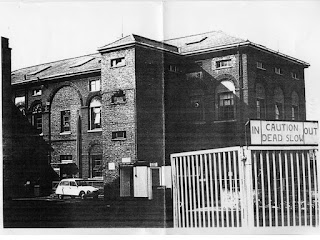 The last original building of the Engine Works, the Pattern Shop of c.1863, early fruit of the expansion following the acquisition of the Holwell Estate, lay alongside Ditch Alley which bisected the enlarged works.  It was on the council’s draft list of buildings to be added to the Statutory List of buildings of architectural or historical importance but, before it could be added, it was demolished.  It was on the Broomfield Bakery site which occupied the Penn site east of Ditch Alley; the bakery closed  in 1992 and, after several years of indecision giving the Council ample time to secure listing, the site, including the derelict Pattern Shop, was cleared for redevelopment.  The site of the Pattern Shop is now part of the car park for Wickes DIY and the Petsmart superstore.  Part of the Boiler Works at Deptford survives.

The justifiable fame of John Penn Jnr should not rest entirely on his work in the field of marine engineering; he has one other claim to fame.  In 1868 he build what was probably the world’s very first wind tunnel for F. H. Wenham of the Aeronautical (later Royal Aeronautical) Society, then based on Blackheath.

This article appeared in the May 2000 GIHS Newsletter
Posted by M at 03:54