During the 1920s, a talented amateur artist, Edmund William Neale, who was a Siemens Brothers employee throughout his working life, created a series of exquisite line drawings, depicting the Siemens Brothers Works, seen from the air above the River Thames.  Though signed none of these drawings are dated but from the buildings in the drawings and other records we can be certain that they depict the Works in c. 1918-20, 1924-25 and June 1927. In addition, Neale also produced an impression of what the site may have looked like, when it was first acquired by theSiemens brothers,in 1863.It is almost certain that the originals of these wonderful drawings no longer exist, but they have been captured for posterity in high quality photographs and the pages of the company magazine.  So,what do we know about theman who produced these outstanding works of art?
Edmund was born on 16 May 1895, the youngest surviving child of George Thomas Neale (b.1871 and Mary Ann nėe King (b.1867).  They had married at St James’ in Woolwich on 13 March 1891 and their eldest daughter, Ann Martha (1891-1935), was born six months later, followed by a son Thomas (b.1894). In 1901, the Neales were living in Woolwich at 17 Nadine Street, with Mary Ann’s younger brother, Edmund King, and other members of her family, a household of ten in a two-up-two-down terraced house. George was working as a spice packer and Edmund King was a dock worker.
Over the next few years Mary Ann had two more children, but they both died in infancy. In 1909, Edmund Neale left school and started work at the Siemens Brothers factory in Woolwich.  By 1911, the Neale family was living at 725 Woolwich Road, just a mile to the west of the Siemens Brothers factory.  George was the head of the household,  which then comprised the Neale family together with eleven-year-old Frederick Daly, a nephew, and 33-year-old James King as a boarder.  George was now going by his second name, Thomas, and was a General Labourer in the Spice Trade, while Ann Martha was a sewing machinist making shirts. Thomas was working as an office boy in a dockyard, and James was a chemical labourer at a paint manufacturer.  Edmund’s profession is given in the census as ‘Electrical Labourer’, working on ‘electrical batteries’.  It is possible that Edmund started on his first ‘Bird’s Eye View; of the Works during the First World War.  Whether or not he was commissioned by the company to do it, is unknown.  Photographs of this drawing can be found in Siemens Brothers presentation photo albums that show scenes from the factory in the 1920’s

Edmund’s older brother, Thomas, died in 1920 and Edmund married Mary Ann McCarthy, in April 1922; there was one child from the union, Kathleen, born in January 1926, but she appears to have died young.
The next version of Edmunds Bird’s Eye View appears as part of the banner headline to the First edition of the company magazine in June 1925.  By then factory buildings had been erected,to the west of Hardens Manorway.  The Siemens Brothers Magazine was published between June 1925 and the company centenary in 1958. For the majority of that time this banner was used.

Banner of the First Siemens Brothers Magazine
Edmund probably also created the line drawing of Faraday (2) in the banner.  She replaced Faraday (1) in 1924 and can be seen at anchor at the Works in the full version of this drawing, dating the drawing to c. 1924-25.  Copies of this exist as high-quality photos and were used as small souvenir albums sold or presented by the company. 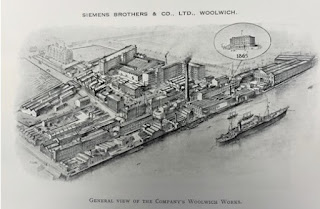 From January to June 1927, the Siemens Brothers Magazine ran a series of six articles entitled ‘An Outline of the Company History’ and, in the February edition, Edmund’s impression of what the site may have looked like in 1863 appeared. 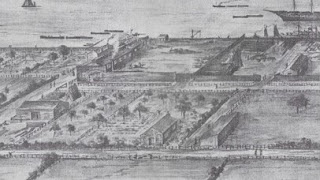 The Original Siemens Brothers Site in 1863, by E Neale c 1927
An extract from the article states
‘From information supplied by some of the veterans among our colleagues, who still remember the old days quite vividly, Mr. Neale has been able to produce the accompanying sketch.’ We may almost regard Mr. Neale as official recorder of bird’s eye views of the works.’
In the final article in this series, the last known version of Edmund’s drawing appears with the caption ‘The Works Present Day’. 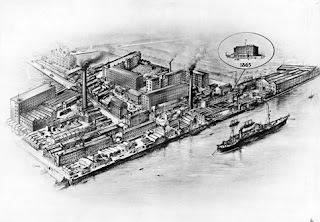 Tragically, Edmund’s wife died in April 1929. and on 13 October 1935, his sister, Ann Martha, passed away.  In the 1937 electoral roll, Edmund is found living at 516 Woolwich Road, with his mother and father.  This was a large detached house about half a mile to the west of the Siemens Brothers works, in which rooms were rented to Siemens Brothers employees. Edmund’s mother died two years later, in April 1938.

In the 1939 Register, taken on 29 September, Edmund and his father are still living at 516 Woolwich Road, and George is stated as being a ‘Stoker retired’ while Edmund is given as a ‘Cable Worker’.  Meanwhile, on the other side of the River Thames at 24 Winifred Street in North Woolwich lived 38-year-old Jessie Bramley.  Her profession was given as ‘Assistant Cook’ and she gave her marital status as married.

Jessie was born on 6 February 1901 at 27 Corinthian Road, West Street in Erith, Kent, on 20 January 1901 and baptised Jessie Victoria Low. Her father was Frederick George Low, a general labourer and coal porter. Her mother, Annie, had had 9 children by 1911, two of whom died young. It appears that Jessie’s father did not hold down a regular job and the family moved from one rented accommodation to another.  This can be seen through the birthplaces of their children in the 1901 and 1911 censuses. 1892: Rainham, Essex; 1896: Canning Town; 1900: Erith, Kent, before they moved in 1910 to 56 Claremont Street, North Woolwich.

In October 1921, Jessie married Thomas Bramley. Thomas was born in Bethnal Green in 1897, the only son of Thomas Bramley, a Blacksmith Wheelwright, and his wife, Elizabeth.  Thomas Junior left school at the age of 14 to work as a Van Boy. There were two children from this marriage, Enos Frederick, born July 1922 and Olive Matilda, born October 1924.  From then on, Jessie’s life can be followed through the Electoral Rolls. In 1929, the couple lived at 164 Elizabeth Street in North Woolwich.  However, from 1930 until at least 1934 she was residing at that address, without her husband.  In 1937, Jessie was at 24 Winifred Street, North Woolwich, again without Thomas.  Living next door, at No. 26, was a Lionel Neale and his wife, Julia.  In the 1939 Register, Lionel Neale’s profession is given ‘Cable Maker – Lead Coverer’.  Whether or not he was related to Edmund, or worked for Siemens Brothers, is unknown, but both seem possible.

During the war years there are no records of Edmund or Jessie; however, her daughter, Olive, married Ronald James O’Donnell in Portsmouth in October 1941.  Ronald was in the Royal Navy and it is probable that Olive was evacuated to Portsmouth, as they lived close to the docks in North Woolwich. Jessie’s son, Enos, joined the RAF and, as a Flight Sergeant, he died in Valetta Southern Harbour on 9 July 1943.  He is buried there.

After the war, Jessie and Edmund’s stories come together and they can again be followed through the Electoral Rolls.  In 1945, Jessie, her daughter Olive O’Donnell, and George and Edmund Neale were all at 516 Woolwich Road.  They were joined at that address by Ronald in 1947, after his discharge from the Royal Navy.  It does not appear that Olive and Ronald had any children.

Edmund’s father, George, died in March 1949 aged 77, and was buried in Greenwich Cemetery on 29 March 1949. From 1950 to 1951, Edmund, Jessie, Olive and Ronald continued to live at 516 Woolwich Road.  On 22 March 1952, Jessie, then aged 51, married Edmund, aged 55, at Greenwich Registry Office. Jessie’s marital ‘Condition’ was given as ‘Formerly the wife of Thomas Bramley from whom she obtained a Divorce’.  They gave their professions as ’Electrical Solderer’ and ‘Machine Cable Hand (Electrical)’, respectively, almost certainly both working at Siemens Brothers.

Edmund died intestate on 24 October 1966 and was cremated at Greenwich Crematorium on 4 November.  Olive died in January 1979; once again there is no record of a will or probate. Jessie outlived her daughter and died in May 1990, again without leaving a will. Ronald died in February 1997, and once again there is no will or probate registered for him.

If anyone can add any further information about the life of this exceptional amateur artists or can provide a photograph of him and Jessie it would be most appreciated.