Deptford Creek in the 19th and early 20th centuries

Deptford Creek continued to run between embankments fringed with marshes until late in the eighteenth century. In some places the banks survived until late in the nineteenth century. Church Marsh was still drained by its sluice opening into the Thames to the west of the Creek mouth as late as 1841 Most of the lines of the current Creek walls were not established until the nineteenth century, and a number of inlets were in-filled at that time or subsequently on both sides of the Creek.

The revetment on the east bank to the north of the railway bridge was constructed in 1842. Before the construction of the Sewage Pumping Station to the south of the railway bridge, the embankment survived on its site with an open ditch running along its rear side. The contract drawings for the cast iron river wall which replaced it in front of the Pumping Station have survived.

The embankment was cut down behind the new river wall and removed from in front of it. A timber revetment was added in front of it, retaining an area of consolidated rubble as a barge hard for the coal barges serving the Pumping Station. Storm water outlets with splash aprons of granite sets were added in 1868.

In 1878 the river walls on the General Steam Navigation Company property on the west side of the Creek mouth were raised above Trinity House High Water Mark to meet the recommendations of the Board of Trade for precautions against flooding.

In the 1850s on the east side of Church Street opposite Flaggon Row were the Vicarage and the Grasshopper Tea Mart.  Small and poor houses were built on the site of the Trinity Almshouses in 1877.  Pender Street was built on the line of the north and east ranges, and Berthon Street on the line of the central gateway, extending eastwards beyond the almshouses site. All these houses were demolished in the early 1960s in advance of the widening of Church Street; their foundations were found in the later excavation.

Further south along Church Street were three-storey houses and shops. An area of three-room cottages to the east of Church Street, centred on Russel Square, was known as "The City" and had its own mock Lord Mayor's Day.

To the south, Addey Street had a bad reputation for criminality and prostitution. The flats of the Crossfield Estate were built across this area by the London County Council in the late 1930s (except Farrer House, which was not built until 1949), and remained under the management of the Greater London Council until 1971.

In the first half of the nineteenth century a theatre stood on the east side of Church Street near the site of the Bird's Nest public house, in a building which had formerly been a school, a warehouse and then a chapel. It closed in 1857.

In 1900 the Stowage was "a stinking unpaved lane" occupied by a rough waterside population, according to Charles Booth's survey. However, there was one notable three-storey house on the south side.

Deptford Green had wooden houses in multiple occupancy and also three-storey houses with basements and tiled roofs. The St Nicholas House flats were later built here by the London Power Company to house its workers.

In the early part of the century hulks were moored off the mouth of the Creek to house prisoners, and sick and disabled sailors. A former ship of Captain Cook, the Discovery, was moored off the Dockyard as a convict hulk in 1824. It was broken up in 1833 and replaced by the frigate Thames. The Seamen's Hospital Society established a hospital on the hulk of the Grampus in 1821. This proved too small, so the Society fitted up the Dreadnought with 200 beds in 1831, and moored it near the east side of the Creek mouth. These hulks were all broken up for their timber when they reached the end of their working lives.

The General Steam Navigation Company was formed in 1820 and established its shipyard on the west side of the Creek mouth in 1825, partly on the site of the former pottery. Stowage House was used as the residence of the Company's superintendent. Views of the yard in c18 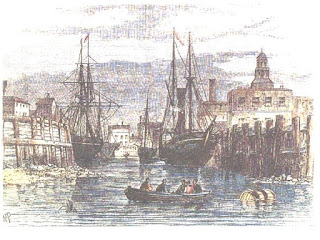 40 show a square building with a clock tower and a cupola, with a porch on its side, and several ancillary buildings. The main building was burned down in January 1858. The main entrance was from the Stowage. The Company extended its holdings westward by leasing glebe and Bridge House land, and also converted its leases of the premises into freehold tenure in a series of purchases in 1837, 1839, 1853 and 1872. Here it built and maintained its paddle steamers. One of the founders was Thomas Brocklebank, a timber merchant of Deptford, who built seven of the Company's early paddle-steamers at his nearby yard on the bank of the Creek. A small inlet was cut as an access to the Creek cl868-76, but there were no docks here. A new joiner's shop, a boiler house and other buildings were constructed towards the end of the century. In the middle of the nineteenth century the Company acquired the lease of the dry dock at Deptford Green, with warehouses, and purchased the freehold in 1880. The Company's dockyard and wharf were used for war work during the First World War. In 1916 a new joiner's shop, a shed and an oil store were built. The Company retained control of the site until 1968, when it was taken over by Blackmore's Motor Transport Company for use as a heavy lorry depot and cargo transfer point. The evaluation found possible boat timbers in a nineteenth-century foreshore deposit on the east side of the Power Station site covered with levelling dumps for the construction of a warehouse, a wall of which survived.