Visit to the Royal Arsenal

A VISIT TO THE ROYAL ARSENAL, WOOLWICH.

In May 2002 a group from the Gunpowder and Explosives History Group spent the day on the Royal Arsenal site – the following report comes from the Group’s Autumn 2002 Newsletter. 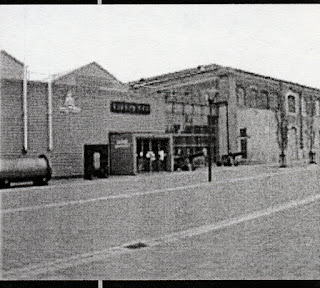 Not to be confused with Woolwich Dockyard, further west (building naval ships from 1513 to 1869), the Royal Arsenal, Woolwich manufactured big guns, shells and other munitions for the army and navy. Starting as an ordnance depot in 1671, on open land  beside the River Thames known as The Warren, it made ammunition from 1696 and cast brass cannon from 1717. The name the Royal Arsenal was awarded in 1805. Its buildings, storage grounds and testing ranges developed eastwards, especially after the shortcomings revealed by the Crimean War (1854-56) and the Abolition of the Board of Ordnance in 1856. By the First World War the site covered two square miles and over 80,000 were employed there in the manufacture of munitions. It closed as a manufacturing establishment in 1967, but the Ministry of Defence (MoD) Quality Assurance Department remained until 1994. 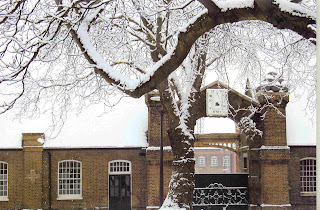 Most of the land to the east has been cleared and redeveloped. The western part covering 75 acres containing many listed and unlisted buildings within a Conservation Area, have since 1997 been in the custody of English Partnerships and their successor the London Development Agency. Large areas of ground, saturated with history but also contaminated, were stripped away at great public expense in 1999, and new roads and drains laid. Housing and industrial developments, combining new construction and conversions are now proceeding apace. The Royal Artillery's, Heritage Lottery funded museum Firepower was opened in 2001. The local museum of the London Borough of Greenwich is also due to move on to the site shortly to present some of the Arsenal's archaeology and history with artifacts recovered from excavations.

The GEHG visit in May 2002 greatly benefited from the presence of Wesley Harry, who was the technical information officer and archivist at the MoD Material Quality Assurance Directorate until his retirement in 1987. In the morning Wesley outlined the Arsenal's history and then led a walk around the earliest surviving parts, notably the Royal Brass Foundry (1716-17, partly rebuilt 1771-4), the remains of the Royal Laboratory (1694-6), Dial Square archway (1717-20), and the Military Academy and Board Room and latterly officers' mess (1718-20). The distinctive architecture of the Academy building, now refurbished as part of the museum, and the militaristic archway, beyond which the ancillary operations of gun making were once performed, are now attributed to Nicholas Hawksmoor.

The Royal Laboratory was where shot, explosive shells' fuses and fireworks were prepared. Its two, now derelict, but handsome pavilions, are perhaps the oldest surviving manufacturing buildings in the country, other than wind and water mills. Associated ranges, and the 1850s ammunition factory that infilled the large courtyard between them were cleared away in the 1960s, We also saw the New Laboratory Square, with two-storeyed ranges of the Napoleonic period. A 'Blitz Event' in the courtyard added music and bustle to the day. Two octagonal Guard Houses (1814-15) mark the site of the riverside stairs and the quay (now replaced by a flood wall), where gunpowder and other materials were landed and outgoing products despatched. The first shipping pier was added in 1856.

Lunch was eaten in the Firepower Museum which occupies the former Paper Cartridge Factory (1855-56). It has a very handsome Polonceau trussed iron roof set upon decorative cast-iron beams and columns. On its upper floor, nimble fingered children once rolled the paper cartridges for muskets. After experiencing the displays here, and their sound effects, we made a quick visit to the large-exhibit hall, formerly a woodworking machine shop, with ornate ironwork that once carried line shafting beneath north light roofs of 1878 and later.

Malcolm Tucker then led a walk around the rest of the heritage area, ending at the former Chemical Laboratory. We passed various premises of the Royal Carriage Factory - its earliest buildings date from 1802-05, classically styled with a clock turret, surrounding a tall erecting shop of 1937 where tanks were built during the Second World War. The Mounting Ground opposite enclosed a building of 1887, where field guns were placed on their carriages. The metal working section of this factory in Building 7 has several ranges of former forges and machine shops from circa 1860 onwards, recently refurbished as industrial units, while the corresponding woodworking buildings were recently demolished, after archaeological recording.

Expanses of open ground marked the sites of other buildings, including the Shot and Shell Foundry (1855-6) where the handsome gatehouse has been retained. The iron- framed Armstrong Gun Factory (1856) still stands and is used as a British Library store. Nearby were former Shrinking Pits, cast-iron lined well shafts filled with oil into which red hot gun barrels were plunged to shrink them out of their liners. Malcolm has recently been engaged in recording these, when they were dug out during decontamination work. Our walk then passed the stone pilastered quadrangle of warehouses (1806-13) known as the Grand Store, for military equipment, and the massive four-storeyed Central Office (1908).

The Chemical Laboratory (Building 20), was established in 1864 by Sir Frederick Abel, War Office chemist, who had a major role in the development of cordite. It is a two-storeyed building in yellow, white and red bricks, in the sub-Italianate style favoured for gasworks offices. At one end we viewed through an open window the two-storeyed room with a ventilator ridge, where chemical tests were performed. Abel is said to have lowered materials and instructions to his assistants from the safety of the balcony. External balconies, now removed, presumably provided relief from fumes, and rooms at the other end of the building were used for photography. The building, later extended, is now being converted into flats, and Malcolm has been carrying out recording work with the Oxford Archaeological Unit for Berkeley Homes.

Thanks are due to Mary Mills who organised the visit, the London Development Agency's staff for arranging the meeting place, and Wesley Harry for coming along at relatively short notice and sharing his knowledge so freely. The writer acknowledges the work of Peter Guillery and his staff at the former RCHME contained in the reference below

I've had many relatives in the past who've had connections with the Royal Arsenal but they have all long past away.My wife's nan who passed away this year due to Covid worked there as a young teenage girl. I also worked here in the general stores Building 5 from 1989 to 1993. This place had everything from a RASRA sports club/bar to its own doctors surgery, gym, canteen. We used to go to the officers mess club on Friday for lunch and a pint. Building 22 was the clerical building which housed admin and personnel as it was back then. The place was always busy. My job was goods in /out sending anything from stationary to calibrated items to out stations which sadly only a few are left. I was going to relocate with the M.O.D like many others to Stockton On Tees but it was later found that the ground planned for housing was completely contaminated. I do have some great memories of my time in the Royal Arsenal but its a shame that they made nearly all of it into a housing area. I did occasionally go /work in the Royal Arsenal East which was where Belmarsh prison is now . I'm not sure if the little site is still there. If anyone knows , please tell me. Great times had.