OUR ELECTRIC LIGHT - FORMAL OPENING OF THE PLUMSTEAD STATION YESTERDAY

His Worship the Mayor of Woolwich (Councillor J.J. Messent, J. P.) formally opened yesterday (Thursday) the Borough Electrical Station at Plumstead. As a matter of fact, the establishment has been working at full pressure for some considerable time, but, however, it is not customary that the opening ceremony should take place until works of this kind are in such working order that the engineer in charge feels himself justified in declaring them in a thoroughly perfect state. This is the explanation in the long delay attending the ceremony.

The Mayor opened the proceedings with a brief speech. He observed that, although the inception of the undertaking was not begun by the Woolwich Borough Council, it had been thought by the Electricity Committee that the station should be opened before the present Council ceased to exist. The idea of its inauguration was due to the old Plumstead Vestry, and he would ask Sir Edwin Hughes, as representing that defunct body, to make a few observations. Before resuming his seat his Worship wished the undertaking every success, and hoped that the dreams of the Vestry regarding it might be realised to the full. Sir Edwin said the Vestry had an objection to private monopolies, and so they conceived the idea of having their own electricity. Speaking of the present, he said that all that was wanted was customers, and to rain [rein] these, the Council would have to offer fall facilities and cheap rates. It would be good policy, if necessary, to spend £100,000 so that every street, and every house in the Borough, might have light, rather than struggle on in a small way. He warmly congratulated the Council on the way they had conducted the enterprise during their term of office. 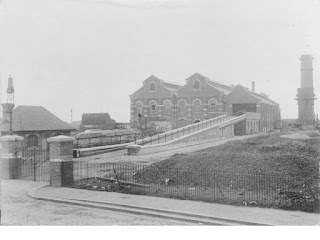 The Mayor was then conducted to the nearest of the large engines, and, under instruction, turned the stop-valve, which started the engine and set the dynamo in motion. Councillor Dark then addressed the company, sketching the history of the undertaking with a few deft touches. The Provisional Order was applied for in September, 1898, and obtained in August, 1899. Plans and specifications were got out by Mr. Mitchell for the plant, and by Mr. Summer for the building, and finally agreed to by the Borough Council which came into existence just at that time. The total expense was about £90,000, of which the plant, including four miles of cables, cost £46,000, and the buildings £44,000, including the dust destructor. The brick making plant, which was laid down later, cost from £4,000 to £5,000.  To start with  the total number of their customers was 29 and they had 1,974 lamps. Now they had 554 customers and 5,510 lamps.

The Mayor having spoken in warm terms of the skill and perseverance of Mr. Mitchell, Mr. Sumner and the Town Clerk, as displayed in the enterprise, and especially of Councillor Dark as chairman of the committee. Alderman Butter put the sentiment into the form of a vote of thanks, and Councillor Kemp seconded. The vote having been carried, the gentlemen referred to replied in suitable language. At the request of the Electrical Engineer, the Mayor named the engines, "Flavia" (after Mrs.Dark), "Wilhelmena" (the name of Mrs. Butter), "Gertrude" (Mrs. Mitchell) and "Muriel" (Miss Churches).

Article in the Friday. October 30th. 1903 edition of the Kentish Independent newspaper. Thanks to Dave Ramsay for the copy. The works – which  became the White Hart Road depot – is now in use by a film company.