A visit to Greenwich Power Station 1998

Environment Week events included tours of the London Transport Greenwich Power Station. Mary and I visited the Station which is on the riverside almost on the Meridian Line on 6th June in the company of about 12 other people. We were fortunate in having an expert guide, Mike Burgess, a retired LT electrical engineer who had worked at Greenwich.

The building is huge and to me the most visually impressive aspect is the interior of the now disused boilerhouse - like some of the bigger railway station structures.  At the other end of the scale there are some fascinating details such as the ribbed walls in specially shaped glazed tiles which provided channels for cabling. Views from the top of the jetty are breathtaking.

The first thing question discussed by Mr Burgess was - why a dedicated power station? The answer is that electrical transport predated the general electricity supply system at a time when electrical supply was very locally based.

The London County Council had been set up in 1889 and took over the horse drawn tramway companies. The Greenwich Power Station was designed by the LCC Architects Department to supply the electric tram system and was opening in two stages - in 1906 and 1910. An elegant rainwater hopper dated 1903AD  is on the rear of the building.

It is interesting to note that according to the The Greenwich and Dartford Tramways by Robert J Hurley that a brand new Electrical Tramway was opened from the King William the Fourth pub in Trafalgar Road to central London in 1904. Where did the power come from with for that?

Around the same time the underground and tube railways were being electrified (1st January 1905 for Baker Street to Uxbridge, 1st July 1905 the first stage of the Inner Circle). But Grieenwich Power Station did not begin to supply the railway operations until 1933 when the LCC Tramways were absorned into the London Transport Passenger Board.  It was then planned to generate at Greenwich the power for the railway extensions in North East London and for the trolleybuses which were to replace the trams in South and East London.  Greenwich supplied both systems until 1961 when the trolley buses were scrapped.   Linkages to Mile End and Mansell Street are identified on the Control Panels.

Greenwich's main function today is to supplement the output of the Lots Road, Chelsea, Power Station at times of peak demand and provide a standby facility.

The original installation comprised of a coal fire boiler house with four chimneys and engine room housing four vertical horizontal compound reciprocating steam engines driving flywheel type alternators at 6,000 and 600 volts 25 Hz. By 1910 the superiority of steam turbines had been realised and four steam turbine alternators were installed for phase 2 of the building programme. Coal was landed from colliers which came from North East England onto the jetty and then to a large system of bunkers.  The original reciprocating engines were replaced by steam turbines in 1922.  The next major change came in the mid-1960s when the steam plamt was replaced by gas turbo generators - Rolls Royce 'Avon' engines similar to those used in jet aircraft. 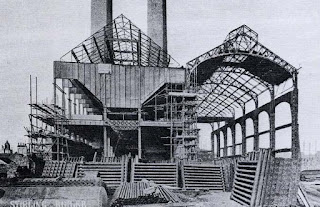 Originally powered solely by gas oil the plant was later converted for duel-fuel operation (oil or natural gas - the latter is now the main source of power).

Start up at the generators is powered by a large bank of batteries. Output from the generation is 11,000 volts and use of transformers boosts this to 22,000.

The jetty is now no longer used. The relatively small quantity of oil used comes by road tanker and gas and oil do not generate the ash which - when coal was used was removed via the jetty.

The building is of some architectural interest. the chimneys form phase 1 were 250 feet high, but, following objections from the Royal Observatory those for phase 2 wereonly 182 feet.

Aa handout was provided with facts and figures, a simplified plant diagram and a site plan.  Altogether a fascinating visit