Sinking of the Princess Alice

THE SINKING OF THE PRINCESS ALICE


The sinking of the Princess Alice on the River Thames at Galleons Reach on 3rd September 1878 after being in collision with the collier, Bywell Castle resulting in very heavy loss of life. 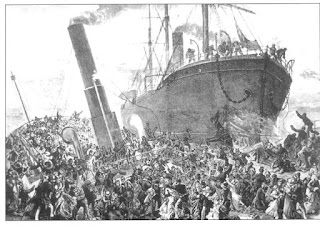 The Princess Alice, saloon steamboat, named after the third daughter of Queen Victoria, the reigning monarch.The ship was a paddle steamer used for pleasure purposes on the Thames; she was 251 tons gross, 219 feet in length with 21 feet beam, constructed with 5 bulkheads and built in Greenock in 1865 when, prior to being consigned to use on the River Thames, she was in service in Scotland plying between Wemyss Bay and Arran (a distance of some 40 miles). She was licensed to carry 936 passengers in sheltered passages; life preserving equipment comprised just two lifeboats and 12 lifebuoys which was in accordance with the regulations of that period. Princess Alice was in the ownership of the London Steamboat Company and her captain at the time of the accident was William Grinstead who went down with his ship.

The Bywell Castle was an iron-built collier propelled by a single four-bladed screw, 890 tons gross, 250 feet long and her stem was 20 feet over the waterline. This compares with the Princess Alice which was built to be low in the water). At the time of the accident Bywell Castle was in ballast having been laid up at Millwall Drydock for repainting. She was heading downstream en route to Newcastle to take on a cargo of coal to Alexandria; Master was Captain Harrison and there was also a pilot, Christopher Dix, on board.

On 3 September 1878 the Princess Alice had been on a day-return cruise from Swan Pier, close to London Bridge, to Sheemess and in the evening was making the homeward-bound journey. At about 6.30 pm she left Gravesend, location of the Rosherville Pleasure Gardens, having collected passengers who had spent the day there. It is thought there were between 700 and 800 passengers on board, including a band playing on the main deck. Next port of call was to be Woolwich with a further embarkation/disembarkation of passengers.

At 7.30 pm Princess Alice approached Tripcock Point at the entrance to Galleons Reach on the ebb tide at a speed of 11 knots. At Tripcock Point the River turns sharply south. At the same time proceeding downstream at half speed (5 knots) was the collier, Bywell Castle, keeping to midstream. On board were a total of 23 men, plus Mrs Harrison, the master's wife. The pilot Christopher Dix, was on the bridge with Captain Harrison. The captain later stated that they were well along Galleons Reach when both he and the lookout in the bows saw Princess Alice's red (port) light and at this point changed direction slightly towards the south shore deciding that because of the ebb tide conditions Princess Alice was heading towards the north shore.  Ebb tide conditions around Tripcock Point were known to be difficult in that an offset current ran north across the river towards Beckton Gasworks pier. A vessel coming upstream could meet two forces - first the cross current acting on the port bow (which would oppose a starboard helm), followed by the tide pressing on the starboard bow. The ship would be taken to midstream, thence toward the north shore and finally spinning back to the south. These movements appear to be what occurred in the case of the Princess Alice.

River navigational -"Rules of the Road" - existed at the time, but, it appears, were not always clearly understood by crews. The general rule was that craft either passed red light red (port to port) or green light to green (starboard to starboard). In the event, or for whatever cause, the Princess Alice crossed the bows of the Bywell Castle on her way back to the south shore. However both masters were men of long experience; there were three lookouts on the Princess Alice and one who survived was also sure that he and Captain Grinstead had seen the Bywell Castle simultaneously.

When Captain Harrison of the Bywell Castle, at a distance of 100 yards off, saw collision was imminent he gave orders to stop engines and to reverse at full speed. The order to stop engines was carried out, but not as was later disclosed, that to go astern, until after some delay. It was not clear why, but there was fear of the screw cutting people up in the water.

Impact occurred at 7.40 pm, the bows of the Bywell Castle striking the Princess Alice amidships, just forward of her starboard paddlebox at an angle of approximately 13 degrees.

The effect of the collision was horrendous; the bows of the collier sliced through 14 feet of the Princess Alice flooding the engine room. Within the space of less than five minutes she split into two pieces, fore and aft rose into the air and sank. Hundreds of passengers and crew, including Captain Grinstead were plunged into the water. Another important aspect of this tragic event was that in 1878 the outfalls of both the northern and southern outfall sewers discharged masses of untreated sewage at high water on the ebb tide (en route to the Thames estuary) very close to the scene of the collision. The water was further much polluted in those days with industrial effluent in the river.

Rescue attempts commenced immediately. Ropes were thrown down from the bows of the Bywell Castle to the unfortunate people in the water below, although few were able to clamber up them. Small boats were launched from the Bywell castle and

else where, but those to be rescued were severely impeded in the filthy water which they ingested causing them to vomit and choke with little hope of survival. Again, a high proportion of the passengers were women and the voluminous clothes of the Victorian era would act as a further impediment by causing rapid sinking. A number were saved by smaller rivercraft. notably 25 who were rescued and taken to Beckton Gasworks in a boat launched by the manager. Some others were taken ashore at Erith. The work of recovering the bodies ensued over the following days. The body of Captain Grinstead was recovered from the river five days later off Woolwich Arsenal Thames watermen were paid five shillings for each body they recovered A diver sent down to the sunken Princess Alice reported that the cabins appeared to be full of bodies, still upright, grouped at points of exit where they had crowded in an attempt to escape. These were freed when the wreck was lifted.

In total 69 people were saved, but the number of those lost was estimated at 650. Some were probably never recovered having been swept downstream or buried in the Thames mud. 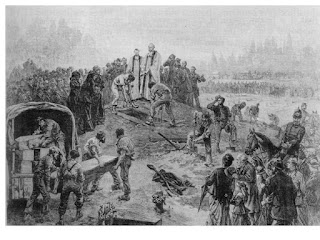 Two of those lost were Walter Bishop and his wife, Mary, aged 38 and 36 respectively. Walter Bishop was my great-great-uncle who was born in Chideock, West Dorset, in 1840. His name appears in the 1841 census for Chideock, but not to 1861 by which time he had left his parents' home. Family legend had it that the couple had recently married and were in London on honeymoon at the time of the sinking, but no substantiating evidence for this has yet been unearthed.

Bodies, as they were recovered form the sinking, were transported to a large shed at Woolwich Dockyard where relatives attended for identification purposes. After identification bodies were transferred to another large shed for preparation for burial, either in nearby Woolwich Cemetery or to be taken away by relatives.

The inquest was held at Woolwich Town Hall; the coroner was Joseph Charles Carttar, a 69-year old solicitor, who was coroner for Kent. The inquest commenced on 16 September 1878, continued for ten weeks and concluded with a verdict of death by misadventure.

On 9 September thousands of people attended funeral services in Woolwich Cemetery. A national appeal was launched for a memorial for all who had perished. The basis of the appeal was for donations of sixpence each and in excess of 23000 people responded. The memorial in the form of a large granite Celtic cross stands in Woolwich Cemetery. In addition some 120 victims; graves of those who were not buried elsewhere are reputedly in the vicinity, but time and weather have taken their toll on any inscriptions and I found none. The City of London also launched an appeal for funds for the aid of the bereaved and some £11,800 was raised. Details were recorded in the "Mansion House" book which is currently lodged in the Borough of Greenwich's museum at Plumstead. (The district of Plumstead is very close to where the disaster occurred).

A Board of Trade inquiry commenced on 14 October 1878 at the Board of Trade court. East India Dock Road, before Mr John Balguy, the Thames magistrate, sitting with three naval assessors. The investigation concluded on 6 November; the resulting verdict was that the Princess Alice was to blame for the accident.

The sinking with the loss of an estimated 650 souls, remains the worst disaster ever in Britain on an inland waterway. A graphically-detailed contemporary model of the collision may be seen in the National Maritime Museum at Greenwich.

The Bywell castle resumed her voyages to and from the Eastern Mediterranean. On the 15 January 1883 she left Alexandria bound for Hull with a cargo of cotton seed and was never seen again having, it seems, been lost with all hands somewhere in the Bay of Biscay area. She is listed at Lloyds as a missing ship. On 14 December 1878, Princess Alice, Grand Duchess of Hesse-Darmstadt and third daughter of Queen Victoria, and after whom the ill-fated paddle steamer had been named, died in Darmstadt of diphtheria, aged 35 years.

Simon Stevens of the National Maritime Museum whose lecture at Plumstead Museum in April 2001 on the Princess Alice disaster inspired me to delve further. The very helpful staff at London Borough of Greenwich's museum at Plumstead who made available to me their records on the disaster.  Gavin Thurston's book "The Great Thames Disaster" published in 1965.