The next episode in George Landmann's childhood memories involve a visit with his mother and sister to "Mrs Burton, 21 Upper Brook Street". 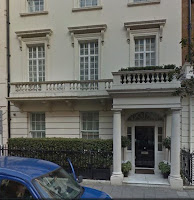 Upper Brook Street is, of course, an upmarket address and no. 21 is very much still there, and now a listed building - as is no 20,  next door.   In fact I think George was wrong and that Mrs. Burton actually lived in No.20 - which is, if anything rather grander than 21.  The Mrs. Burton  who lived there had been Marguerite Lydius from an upmarket French Canadian and New York background - which may have some relevance to Landmann's later Canadian adventures. He says she was a widow with one child, a daughter.   She was the widow of Ralph Burton, a career soldier who had seen service in the Americas, particularly in Canada and shortly before his death been elected to Parliament.  He had in fact left two children, something which Landmann may not have known or remembered.

Landmann describes at length the dining habits there of a M.Tremble,a Frenchman - but of more interest to us is his meeting there with the Chevalier D'Eon.   There have been many, many books and articles written about the cross-dressing Chevalier.  Very briefly he/she had had a military career in France but was predominately a spy and a leading member of 'The King's Secret' working for Louis XV and also undertook major negotiations on behalf of the French Government.  He is someone who it might be thought almost anything might be true - in particular the reasons why, in the late 1780s, he was living in London dressed as a woman.

I also think that the Chevalier's adventures in the French military and espionage services may have some connections to the background of George's father Isaac Landmann, since there seem to be some co-incidences of place and contacts.

George - who was then nine years old - described the Chevalier's dress in a great deal of detail  - 'black silk gown .....puffed-up muslin kerchief ....muslin cap with broad muslin frill' and wearing the Cross of St. Louis (as shown in most portraits of the Chevalier).  However he adds that the Chevalier's 'voice was gruff and strong as that of a grenadier .....every appearance of a man in a woman's apparel'.  This bears out some of the something noticed by recent commentators on the Chevalier - one article about a recently discovered portrait points out that despite the women's clothing, a great deal of stubble is shown on the chin! 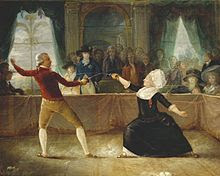 After dinner at Mrs. Burton's, the ladies the retired, and the Chevalier remarked that it was good they had gone because  now 'we may enjoy a little rational conversation'. The rest of the evening was spent discussing the 'art of war'.    I think this discussion was in French - which shows that young George was not only allowed to stay up and listen to the Chevalier, but that he already spoke at least two languages.

He goes on to talk about the Chevalier's sword fight with St. George. This was a famous event held at Carlton House in front of the Prince of Wales and was painted by Robineau

St.George is another person who has been the subject of extensive research and writings. He was a virtuoso musician from a slave background in Guadeloupe and educated in France.  He was 'celebrated' - as Landmann says - 'as the most expert swordsman of his day'.  Landmann also mentions in passing that he was 'a man of colour' (a phrase which, to my mind, could mean a number of things some unconnected to his racial background  -ie 'called to the colours' was sometimes used to mean joining the army).

St.George later came to dinner with the Landmann's in Woolwich where he met a party of artillery officers and M. Mollard - Charles Lewis Mollard, the French fencing master at the Royal Military Academy.  Mollard is described by Landmann as a 'coarse vulgar fellow ... educated among the gendarmerie of Paris'.  Inevitably the party went into the garden for a 'carte a tierce' between Mollard and St. George.  This proceeded with Mollard being completely trounced - which he refused to believe or accept. St. George then undertook a great feat of agility and skill which 'drew forth loud and reiterated applauds from all the company'.  Mollard then lost his temper and the proceedings were brought to a close.

Finally, from Brook Street, young George was taken to 'Astley's Amphitheatre of Equestrian Arts' which was just south of Westminster Bridge and where demonstrations of virtuoso riding skills were performed. It has later been known as 'Astley's Circus' - although this is not a name Astley himself used. 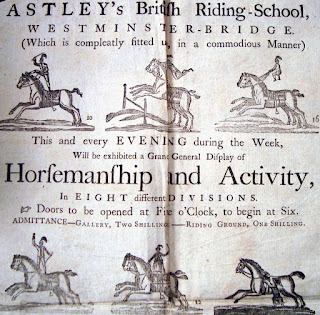 He describes how he saw 'the old original Astley .. mounted on the identical white horse which Lord Heathfield habitually rode at Gibraltar during the siege ... his Lordship made a present of him to Mr. Astley'.   I am not at all sure what George meant by 'identical white horse' - since if it was the actual horse which was presented by the regiment to Astley in 1766 - and  which went on to be a star performer with Astley, it must have been a rather old by the time George got to see it. Also it was unlikely to have been anywhere near the siege of Gibraltar itself since that was not until 1779.  However, I am sure the story was all good for show biz.  At the end of the show a blaze of fireworks spelt out 'God Save the King'.

So - the above has been a couple more pages of  George Landmann's childhood memories, albeit they are sometimes a bit imperfect. He was a privileged child who met interesting and prominent people in circumstances where other children might have been sheltered. The people he met were from an overwhelmingly military background - but one which was intellectual, cosmopolitan and more than a bit eccentric.


Sources
British History online. Upper Brook Street. Web site
Landmann. Adventures and Recollections.
The Guardian. Arts Website
Wikipedia, as convenient (including biographical articles on D'Eon, St.George and Philip Astley)
There are also on line some interesting biographies of Philip Astley, about his military career under Heathfield and his later use of Gibralter to publicise his shows.
Posted by M at 11:40

I am studying Margaret Lydius. I am curious is you have any thoughts on the identity of the Monsieur Tremble who was at the dinner of July 25?