Health and Safety at Woolwich
Right after his information about the Verbruggens come a couple of pages on the proving of new cannon in the 1780s - and which he witnessed as a small child.
He describes how a batch of new cannon - a hundred or so received from the Carron Company are all lined up pointed at a butt and then set off.  It was 'no very uncommon occurrence' for cannon to burst - and on this occasion the bursting set off its neighbour, turned it round, sending a cannon ball flying in the direction of Woolwich church.
Tests on firing in different wind speeds were carried out two hundred yards from the front of the barracks - sometimes with alarming results.
Out for a walk with his mother and sister one day they visited another battery on Plumstead Common. A mortar was fired and they were struck with a shower of gravel. The mortar had burst on firing and the artillery men around it were all knocked down.

Next door at the RMA
﻿
﻿
Isaac Landmann took in private pupils at his home in the old RMA building at Woolwich. Next door to them lived the great mathematician Charles Hutton - with whom the Landmann family were on very bad terms. A family friend and constant visitor was George Koehler - then a Lieutenant ﻿﻿

and already well known for his gun carriage invention. One of Isaac's pupils was Lord Edward Fitzgerald who having survived military service in America and a seat in the Irish Parliament had come to Woolwich.  Both Koheler and Fitzgerald were in their 20s with considerable service experience - nevertheless they felt able to walk in Landmann's garden and sing silly songs about Hutton. The results, said George, were 'disagreeable'.


Prince Rupert's Tower
Drawings of the RMA buildings at this time show the remaining Tower from the previous Tudor structures. I have no idea why it was called 'Prince Rupert's Tower'. It was in fact in the Landmann's garden and was 'considered unsafe'.  One night George saw it rocking to and fro in a high wind - but his father treated this 'with disregard'.  Nevertheless Isaac carried out tests by 'suspending a plummet to the ceiling' - and, yes, the Tower did rock two inches either way.
George says that the Tower was the home of a Mrs. Simpson 'in a state of great poverty ... upwards of one hundred years of age'.

Mrs. Simpson was the widow of Thomas Simpson who had taught mathematics at the RMA and who had 'revised the elements of Euclid'.  Simpson was self taught and came from a humble background as a weaver. He had married a woman thirty years older than himself with two children. Thus she lived in the Tower with her son 'a poor tailor' for twenty years after Simpson's death. 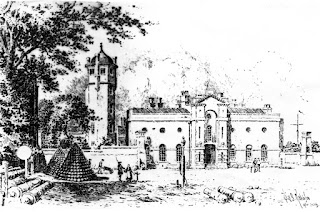 He also says that the tower was 'one of a chain of towers' with the 'sides of the top apartment consisting almost entirely of windows'.  He said he had seen the remains of two other such towers. One of these 'the lowest room only ' was in a garden at the western end of what is now Powis Street. This was of course neither near the river, nor very far from the Warren and Tower Place. It could conjecturally have been part of the old Woolwich manor house - ~Woolwich Hall. The recent and very detailed Survey of Woolwich seems not to have covered it. The other tower he noted was 'east of Plumstead  Common' and 'occupied by a farmer'.  Any information on this would be welcome.

George further describes how a model of Prince Rupert's tower was made by a Mr.Short  the Ordnance modeller (said to by Landmann to be a man of six feet four). He was eventually to donate this to the United Service Institution.  It is perfectly possible that this model still exists somewhere - the collection was broken up in the 1960s and some of Landmann's material went to the Royal Engineers Museum, now in Gillingham, but not this model.   Where is it??

Sources
Landmann. Adventures and Recollections
RE Museum. Correspondence.
Survey of London. Woolwich.
Wikipedia - as necessary
Posted by M at 07:20