George Landmann - the Verbruggens - was there a scandal?? 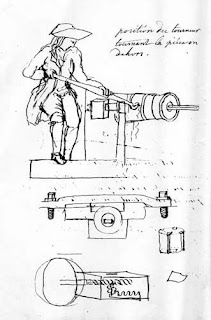 The next episode from George Landmann's childhood reminiscences involves work at the Arsenal - and is no doubt taken from his father's Commonplace Book and notes.  I am approaching it with a great deal of caution.  I am only too well aware that here is a subject on which there has been a vast amount of academic and expert research and that extremely knowledgeable people have spent lifetimes on it. Some of them are bound to have been aware of  Landmann's 'Adventures and Recollections'.  All I can offer is a quick look through some websites and a great deal of ignorance - but - anyway - who were the Verbruggens and what did George have to say about them?

﻿﻿﻿﻿﻿
Verbruggen's House is one of the listed buildings on today's Arsenal site and they are thus relatively well known.  Jan and Pieter Verbruggen, father and son, were - like Isaac Landmann - head hunted by the British Government, in their case from Holland, and appointed to take over the Royal Brass Foundry. Survey of Woolwich describes how they modernised both the building and the gun founding processes.  Verbruggen's House is dated to 1772 and the Survey describes how the Verbruggens did not like the accommodation used by their predecessor Master Gunfounder and how the house was built for them. Today it is in use as offices.

A great deal of what is written about the Verbruggens - locally at least - is in connection with the Arsenal buildings - Verbruggen's House and the Royal Brass Foundry.  George Landmann was writing in the 1850s and without our heritage of listing status and histories of the Arsenal.   It was a century before Hogg's history of the site.  I assume he only had his memories and his father' notes to rely on - and personal contact with some of the main players in this story.


He says 'in 1784 Mr. Verbrugen, (sic) a Dutchman with a brother, or son and three daughters, resided in the Warren ... he had entered into a contract with the Board of Ordinance to cast all their brass cannon, mortars and howitzers, and was allowed the use of the foundry for that purpose'.   George  thus makes no mention of an appointment as Master Gunfounder, treating the father and son  as mere contractors.  He goes on 'the castings were to be perfectly solid and free from any cavities  ...... yet the secrecy and mystery in observed in finishing the work created ... a suspicion that all was not quite correct'.

Now why should that be?  There are a number of websites which deal with the Verbruggen's work in The Hague.  I cannot vouch for their accuracy, and all I can say is that they look to be respectable and quote all sorts of original sources and a body of research associated with them and the lengths undertaken by the Dutch to improve the manufacture of cannon and the inspection regimes they introduced.  They also describe the initial success of Jan Verbruggen at The Hague. They also describe how it was discovered that holes and imperfection in the castings were being packed with screws, with a suggestion that this was common - if dangerous - practice.  Hovering about is the suggestion that Jan Verbruggen got his contract to come to England just in time to prevent himself being sacked.

To return to George's account - he says that Verbruggen's work came to the attention of Captain Thomas Blomfield, Inspector of Artillery.  Blomfield was indeed appointed to this post in 1780 and is said to have 'begun by condemning 496 new artillery pieces, about a quarter of Britain's annual production, as unsuitable before they were sent to the army or the fleet' - a new and rigorous inspection regime in which he became extremely successful. 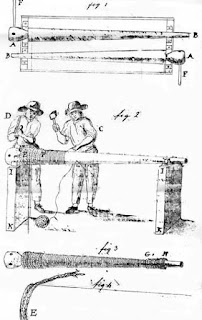 George says that Blomfield  "ordered a brass cannon to be well cleaned,and particularly to be freed from any grease, and then washed with strong vinegar over the whole surface. This having been done, on the following day a vast number of circles of verdigris of different diameters appeared dispersed from the muzzle to the breech. Blomfield now directed that the same cannon should be sawn into two longitudinal sections, as nearly through the middle as possible, when, after washing the bore first with soap and water, and then with vinegar, fifty-six screws were discovered to have been most ingeniously inserted into as many cavities or defects in the casting ; many of them having been driven from the inside".

He continues "Verbrugen lost his contract ...he shortly afterward died'.  Jan Verbruggen died in 1782 and his son Pieter only four years later in 1786.

Now, as I said above, I don't know the truth of all this.  I don't know if some clever academic has written it all up, and maybe disproved this story. Adventures and Recollections is relatively well known and surely someone has investigated this scandal.  Nevertheless I have never seen any reference to it - even the Dutch research, mentioned above, does not extend the Verbruggen's career after they left the Hague.

Was George right about this??  Is this story true??


PS - A codicil to the above
I have a note from Ruth Brown - who has written “Gunfounding and watercolourists. The Board of Ordnance’s patronage of artists in the 18th century.” Royal Armouries Yearbook, vol 4 1999, 102-112. and also written the new DNB entries of Schalch and Verbruggen.

- and so clearly knows far more on the subject than I could every hope to.

She says: You need to get hold of De Beer's Art of Gunfounding for the Verbruggen side of the story.  Neither of the Verbruggens were dismissed by the Board of Ordnance; they were jointly appointed as Master Founders in 1770, before Blomefield's promotion in Woolwich. Both died in post.  I think there was a lot of ill-feeling in late 18th century Woolwich over the treatment of Andrew Schalch by the Board of Ordnance who dismissed him, (after a decade on non-activity) But Schalch's son-in-law was Colonel Belford, a number of his Schalch relatives were in the Artillery Regiment and his nephew Gaschlin was the Ordnance Modeller. All this kept Schalch's memories and feuding alive and may have affected how the Verbruggens were remembered.
I wonder if the Landmanns, with their German connections, picked up those feelings.
The Verbruggens were told not to mend guns, but they never got sacked for it. The Foundry was sadly reduced after the American wars but this is partly because of financial problems- little changes!- but more because the government now had a glut of bronze guns and few new pieces were needed.

Sources
Grace's Guide
Landmann, Adventures and Recollections
List of Officers of the Royal Regiment of Artilley
Survey of London. Woolwich
The Napoleon Series. Web site
Posted by M at 07:34