In writing about George Landmann is it important to first look at his distinguished father, from whom he learnt so much.

Isaac Landmann was Professor of Fortification and Artillery in the days when the Royal Military Academy was becoming an intellectual hothouse.  He left behind a canon of important books on his specialist subjects - and yet we know very little about who he was and where he came from.  There is a suspicion of a very interesting background, which remains totally obscure.

﻿
The Royal Military Academy was founded in 1720 and relaunched in 1741 (also the year of Isaac Landman's birth).  It was then based in the still existing building on the Arsenal site. In 1773 Charles Hutton was appointed as Professor of Mathematics.- Hutton was an extremely important mathematician from a humble background in Newcastle, who, along with a distinguished publishing record performed the calculations necessary to work out the mass and density of the earth. (In Woolwich we even named a ferry after him - and he is buried in Charlton). Paul Sandby (THE artist) had been appointed Drawing Master in 1768, and founded the Royal Society of Arts at the same time. Isaac Landmann became Professor of Fortification and Artillery in 1777.  He replaced Professor Allan Pollock, who was then First Master.

It is, I think, important to note that the appointment as Professor of both Fortification and Artillery illustrates a point - here, at Woolwich, the two future Artillery and Engineering Regiments - - were once seen as a unified subject when taught to the young gentlemen cadets.

Isaac seems to have been head hunted by the Government to this post. He had been teaching at the Ecole Militaire in Paris, but, following reorganisation there was reduced to turoring 'the art of war' privately to young French gentlemen.  Sir Thomas Page was sent to Paris, under Royal Command, with inducements including a pension (apparently never paid). He is said to have already known Isaac Landmann, which is why he was sent - Page was an important cartographer, engineer and graduate of the RMA. At the time he was sent to Paris to see Landmann he was Engineer in charge of the eastern coastal defences, but was also recovering from wounds received at the Battle of Bunkers Hill, in America, in 1775.

﻿﻿The name of Landmann - and indeed Isaac Landmann - is not uncommon.  It mainly occurs as the name of men of German Jewish descent.  From the little we know of his past 'our' Isaac Landmann was German - and this comes from a chance remark by George III that he had origins in common with Queen Charlotte who came from Mecklenburg-Strelitz   However Isaac seems to have been involved with the French military - and in fact is said to have had 'field experience ' with them. He is said to have been Aide de Campe to (French) Marshall de Broglie.

﻿﻿I must admit here to being confused - not the least about the Seven Years War, which seems to be relevant here. I should also admit that, despite having passed examinations in European History at O, A and first degree level, I still know nothing about it - and certainly nothing which explains how a young German got to be assistant to a major French General - and Marshall of France.  De Broglie is said to have been experimenting with the ideas of a division of his armed forces based on skills - cavalry, artillery and, maybe, also engineers. He was out of favour and dismissed from army command during the 1760s  but returned to successfully promote the divisions which became the future of military practice.  Perhaps a future researcher will discover how Isaac Landmann became his protégé and such an expert in 'the art of war'  as to be wanted by the British Government. It is also important to note that French practice in fortification was very advanced following the work of Vauban and others, including de Broglie.

﻿﻿There is one more small clue to Isaac's past - George Landmann was to meet in Gibralter the Countess of Noailles - Anne Louise Marie de Beauvau.  She told him  she would give him "some information as to the fate of my mother's uncle, who commanded a regiment of Swiss guards at the commencement of the great revolution; and also respecting another relative then serving in the gardes-du-corps of Louis the Sixteenth, and belonging to the company of her father-in- law, the Prince de Poix". That information never came.  The Swiss guards were, and are, elite mercenaries who defended foreign royalty - of particular note was their defence of the Tuileries in 1792 during the French revolution.  We know nothing of Isaac's wife, except that her name was Katherine, and through this piece of information that she came from an elite military family.

And so Isaac and Katherine came to Woolwich in 1770 where Isaac took up his appointment, and they were given accommodation in the Royal Military Academy building (if you stand opposite the Greenwich Heritage Centre, its the big building on the left). George was born a couple of years later.

In his years teaching at Woolwich Isaac produced a number of books and papers on his specialist subjects (see below).  There are also a number of manuscripts which, when I saw them, were in the Royal Artillery Library, with drawings and Isaacs commentary, written in French.  He eventually retired to a nice house in Crooms Hill - but that is part of George's story which I am about to move on to. 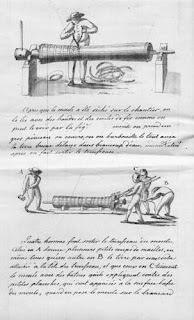 Some of Isaac's books

But - we need to move on to George Landman's childhood in the Royal Military Academy, Woolwich