For the past (nearly) thirty years I have flirted with the idea of doing a biography of George Landmann.
I did a lot of research in 1986 for a booklet, timed for the 150th anniversary of the London to Greenwich Railway - and ever since then I have piled up more and more information.  I am also stuck in that I don't feel I could publish, and - more importantly - distribute, a biography of that type - and there is no chance a 'proper' publisher wouldn't even start to look at me.  I am also only too well aware that I am likely to make BIG mistakes in the sections about the Peninsula War

So - I will put a bit together now and then - on this blog - and see how we go from there.

Lt. Col. George Thomas Landmann was born in 1780 in the Royal Military Academy in Woolwich where his German father was a professor
He was brought up in Woolwich and wrote a very lively account of his childhood
As a teenager he went to Canada and had some REAL adventures
As a Royal Engineer he prepared battlefields for famous generals in the Peninsula War
As a linguist (and I guess a spy) he travelled round Portugal and elsewhere
He became head of the Royal Engineers in Ireland, in Durham and in Gravesend
His marriage broke up and he left the army. He then lived in Greenwich.
He travelled round Europe with Congreve negotiating for and building gas works in major cities 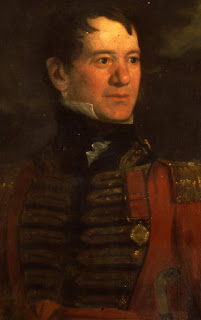 Hello M. I just came across this wonderful blog while doing my own research on the early military references to British Canada circa 1790-1812. I am a poet by trade but from time to time dabble with historical research and family lore here in Canada. In 1990 I had the chance to work at an upper Great Lakes military post at the head of Lake Huron called Fort St. Joseph. This is where our dear Lieut. Col. George Landmann comes in. With his engineering training he spearheaded the building of the fort starting in 1796. he alludes to these experiences in his Memoir. He worked with many people in the British engineers department while posted in Canada including a German surveyor by the name of Theodor de Pincier who lived in Quebec. I think a full fledged biography on Landmann would be of prime importance.Have you tried any Canadian publishing houses? I will continue to follow your postings and research with much interest.

Thanks Denis I have been trying to email you and failing . When I first started researching Landmann in the 1980s. I was in touch with Barbara Tunis who wrote the entry in Canadian. DNB. Writing him up is easy for his autobiography - although he never mentions his first wife and marriage. (so what else did he leave out?). And the Greenwich Railway is also easy BUT in between I his military career where there are loads of terrifying specialist military historians who will note every mistake. Get in touch if you can

Hello Mary. Thanks for responding. This is exciting news. It would be great to coordinate notes and details here from Canada on this fascinating subject. You can find my biography and contact information on Facebook and other poetry sites here in Canada. Or email me privately here in Windsor, Ontario Canada. Best of luck in your research.

Denis Robillard would be happy to hear of your research on Landmann. He is a published poet and historical researcher in Canada. He can be reached at DenisRobillard@mytools2go.ca or via facebook. Thank you.