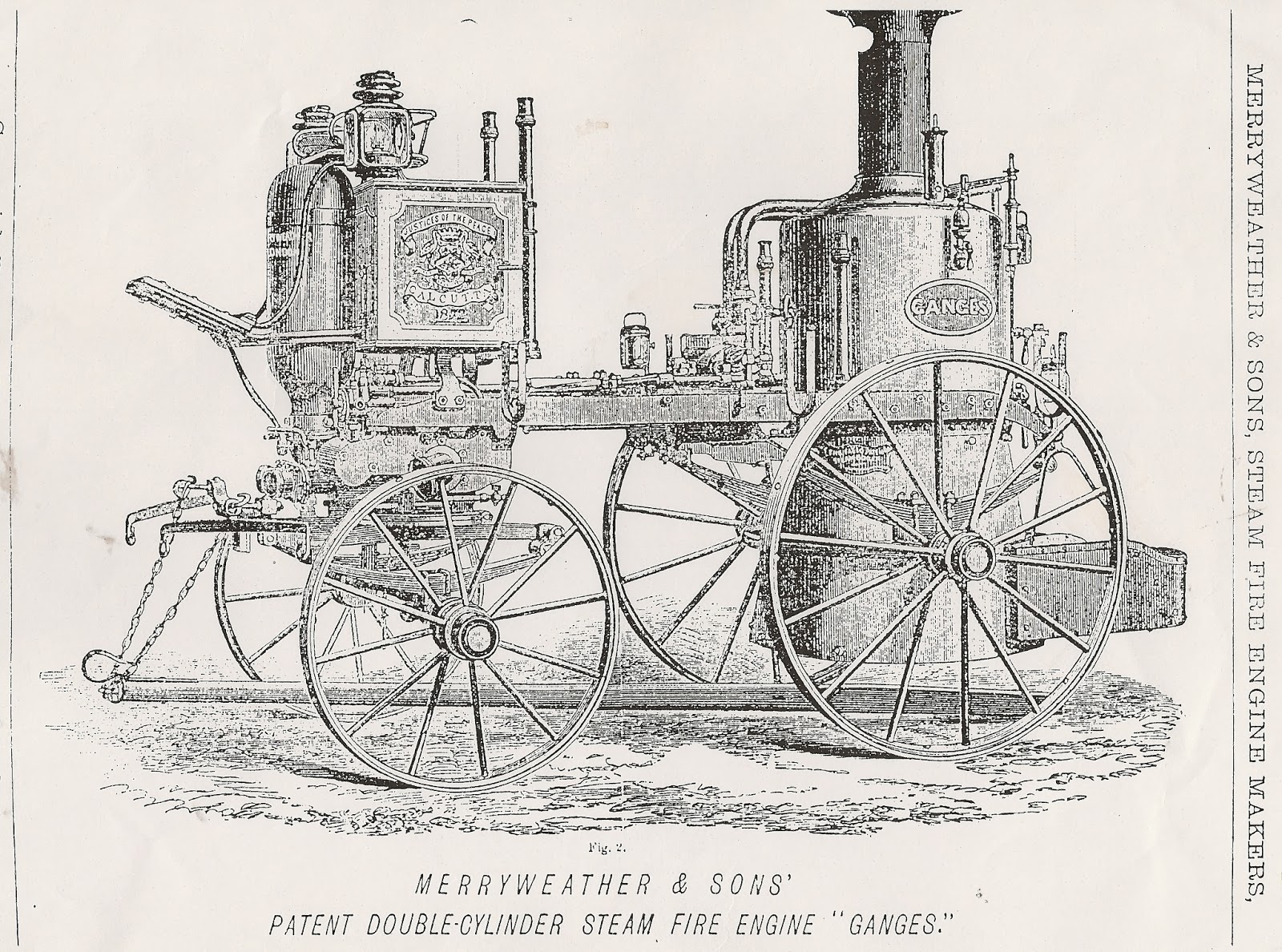 MERRYWEATHER & SONS, STEAM FIRE ENGINE MAKERS
MERRYWEATHER & SONS' PATENT DOUBLE-CYLINDER STEAM FIRE ENGINE, "GANGES."
,
This class of Engine is made in one size only, and answers to the general specification given on page 6  It is the lightest of the
double-cylinder Engines of our make, and is constructed to be drawn either by men or horses.
One of these Engines was supplied to the Municipality of Calcutta some years since, and has given every satisfaction; since then
orders for similar Engines have been executed for the same municipality. The wheels are made of wrought iron, as shown in the
illustration, these being found to suit the climate of India better than wood wheels.
During the Franco-Prussian war Merryweather and Sons sent six Steam Fire Engines to Paris for its protection. One of these
engines was of the above class, and, although it left their works unfinished, having to go into Paris by the last train previous to the
closing of the city gates, it was selected to supply the street mains with water, as the waterworks had stopped, being outside the
City, and the work was accomplished very successfully. This Engine was also employed to supply enormous reservoirs placed at an
elevation of two hundred feet from the ground. It has, therefore, been amply proved that this Engine is not only a most excellent
Fire Engine, but also a powerful portable Pumping Engine. The other Steam Fire Engines were, according to the Engineer's report,
instrumental in extinguishing very extensive fires during the bombardment.


This size of Engine is in use in the Moscow Fire Brigade (made to burn wood). It is also adopted by Her Majesty's Government ,
in the Colonues, and solely adopted by the English War Department.
Another Engine of this class was taken by the makers to Stockport, where it was shown off in the presence of the Town Council.
and raised steam in seven minutes to 1000 lbs. pressure, pumped 530 gallons minute, discharged a jet 1 3/8 in. diameter 240 feet distance,
and eight jets to a proportionate distance. The Town Council met specially, and purchased the Engine at once, although it was on its
way to another part having been lent only to the Corporation of Manchester, about eight miles distant, during the building of a more
powerful Engine to their special order.
By means of ‘dividing breechins’ each Engine will pump 4, 6 or 8 jets of water simultaneously.
This Engine may be fitted with wood instead of iron wheels as shown on pages 60 and 61
PRICE LIST  (not scanned)
PATENT DOUBLE-CYLINDER STEAM FIRE ENGINE-"GANGES."
The following articles are included with each Engine :-  Injector with Tank complete, Pressure Gauges, Feed Pump, Feed from
tin Pump, one Copper Suction Strainer, four Copper Branch Pipes (two long ,and two short), two Supports for Branch Pipes, six
Metal Nozzles, four Lamps with strong reflectors, Water Bags for wheels, Engine hose and Suction Wrenches, Shifting Wrench
stoking Irons, Oil Can, Spare Valve Facings and Gauge glasses, Pole and Sways Bars for horses, complete, without Suction and Livery Hose