This article originally appeared in an issue of Bygone Kent.

The site of Hughes Barge Yard is now covered - or soon will be - by housing on the development now known as 'Lovell's Wharf'. Orinoco too is under different ownership and I have not seen her for a long time - information is always welcome.


Jim Hughes was a friend of mine who lived in Blackheath. I knew him as a tenant activist, a teacher, a Labour Party member, a historian but most of all as a sailing barge enthusiast and a lover of London's river. When it was announced that the Millennium Dome was to be built in Greenwich Jim tried his best – but in vain - to persuade the New Millennium Experience Company that they should take an interest in the many famous sailing barges built in Greenwich.


Jim died before the Dome was built but in his last weeks he contacted me and I understood that he wanted me to find the last Greenwich barge still sailing – the Orinoco. I went to Hoo Marina and met her skipper – but she never made it to the Dome despite all our efforts.

I asked Jim's widow, Elsie, if I could look at the books and papers he had left. 'Yes' she said 'but take them afterwards to the Docklands Museum, as Jim wanted'. As I went through the piles of pictures, which were Jim's lifetime collection, I found some manuscript – Jim's notes on the Orinoco and her builders. I felt that the best I could do was to write these notes up into a coherent article and get it published. So, this article is for Jim – and most of it is by him.

Perhaps I should start with what Jim himself had written in a letter to a friend in 1990.
'… a few months it ago it came to my knowledge that the sailing barge 'Orinoco' was built at East Greenwich by a barge builder of the name of HUGHES. From the local history library I discovered that Frederick Augustus Hughes & Co, had been in business as a barge builder at Providence Wharf, River Bank, East Greenwich from 1887 until 1905.'

Jim knew, as I do, that there must have been many barge builders in Greenwich over the centuries. We tend to know about Pipers and Shrubsall – both recent and well documented. Almost all the others have vanished, without record. Their sites probably consisted of a length of foreshore – abandoned once the barge was built – and the barges themselves are long gone. To research one, hitherto otherwise unknown, barge builder was a real challenge.

Perhaps because his name was the same as theirs, Jim spent a lot of time trying to unearth Hughes the bargebuilder.

He found first of all a Frederick Augustus Hughes, a lighterman living in Florence Road, New Cross in the 1850s and born in 1811. Frederick later became a Custom House Agent and his four sons, Frederick, Augustus, Edmund and Walker all went into the lighterage trade. It appeared that his son Frederick was apprenticed to an Augustus Edmunds in 1863. Edmunds lived at Carisbrooke Villa in Westcombe Hill, Blackheath, between 1864 and 1900. He had a barge building business on the Greenwich peninsula and it must have been a large and prosperous business for him to afford such a grand house. Carisbrooke Villa was on the site of what is now Broadbridge Close near Blackheath Standard. No doubt young Hughes was well taugh 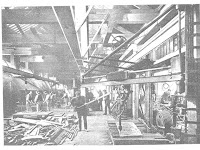 t.
By 1887 – F.A.Hughes was registered as a barge builder at Greenwich and ihe signed the lease for the site which seems to have been acquired from Coles Child whose interests he appears to have bought out Coles on the Morden College owned site.

The Wharf was called Providence Wharf and was on the site downriver of what is now Piper's Wharf with an entrance at the end of Banning Street. It is part of the complex of wharves owned by Morden College and developed by Coles Child from the 1840s – a process partly described in my recent articles on Lovell's Wharf for Bygone Kent. Jim discovered that the site is marked as 'Hughes Barge Builders' on maps of the 1880s and on some deeds from Morden College.

Although the business was thus owned by the father, it seems that the sons were in fact in charge. Frederick, who had been apprenticed just down the road with Edmunds, lived nearest to the new barge yard's site in Greenwich - just round the corner in Commerel Street, SE10 – an address which could never be described as up-market. When he later moved it was just along the road to 1 Glenister Road – another address difficult to describe as anything other than in a working class area. Also closely involved in the business was the second son, Augustus George who, in 1886, was living at 'Garnet' 21 Glenluce Road, Blackheath - a much more 'middle class' address than that of brother Frederick. At that time, Jim reckoned, he would be about 35 years old.

Thus the Hughes family ran their barge yard at from the mid-1880s Providence Wharf, taking over Dawsons Wharf next door in September 1890. The works at must have been larger and more diverse than is implied by barge building since it was described in a letter of 1905 as an 'Engineering Works'. – however a feature of the site plan was a 'Launching Way'. Jim found a record that in 1889 Sailing Barge Wyvenhoe was built for Hughes by Forrest. I am assuming that that is the same Wyvenhoe which is up and down the river all the time these days. If she was originally built for Hughes it makes his company seem rather larger than it appears at first sight and that they intended to be a trading company rather than merely builders.

The founder of the works, F.A.Hughes, was around throughout the lifetime of the business and it is a surprise to find him still alive in 1905, aged 94 when he signed a lease which is still in the Morden College archives. However from that date the works seemed to fail. By 1907, Augustus had died, the firm had closed and the wharf was in the possession of Tilbury Contracting and Dredging.

It is possible that an 'Edmund Hughes' continued to work at Providence Wharf. Jim quoted 'The Lure and Lore of London River', dated 1932, which said that a 'small lightering business' was carried on at Providence Wharf by a 'freeman, Edmund Hughes' and that he had gone into business as the first Managing Director of London and Tilbury Lighterage at 'far larger Dreadnought Wharf' – which London and Tilbury had acquired from the Rennies. Pictures published in the 1920s show London and Tilbury's vessel Tilburnia, described as fitted with a 'Hughes rotary cutter' – was this device perhaps developed by Edmund.

Edmund Hughes had moved by then to 1 Priory Park in Blackheath – a much more upmarket address and a house which still exists today. I don't know who Edmund was – Jim seems to have left no record. Was he a son of Augustus – or his brother?

The family however did seem to prosper. In January 1924 an Arthur Mumford Hughes was listed by the Freemen and Apprentices of the Worshipful Company of Shipwrights and described as the son of Edmund Hughes of Blackheath. In 1946 he was admitted to the Court of Assistants. Does the middle name Mumford imply that he had some relationship - perhaps through his mother - with the owners of the flo

ur mill in Greenwich? His son Arthur Mumford Hughes was admitted to the Livery in 1924 – he had an even posher address at Mayfield, Chiselhurst, Kent.


Jim had therefore traced the history of a barge building family – from their origins as Deptford lightermen to an engineering/boat building business, meanwhile moving personally ever more into a middle class environment. What has happened to them? Will their family historians discover this saga and take it up? Did they in fact go on to become a much large business under another name.

Jim had started to research the Hughes because of Orinoco and he had found a bit about her. According to him, Hughes built Orinoco in 1895, commissioned by Masons cement fleet based at Waldringfield on the Deben, although she was eventually owned by Cranfield Brothers. The records day she was sunk in collision in the Thames in the 1950s and raised and bought by Tester Laurie Tester of Greenhithe Lighterage co and restored and then rerigged at Faversham. Since then she been in a number of hands as a leisure vessel.

After Jim died I went down to Hoo Marina and found Orinoco and her skipper. I understand that she has now been sold again and would be glad to know what has happened to her and if her new owners know any more about her than I do. Research on her has suffered since Hughes has been confused with the later Greenwich barge builders, Hughan – who were, in any case, on a different site. I would also like to know more about the Hughes family and what other craft they might have built in Greenwich.

Most of this article has been compiled from the notes left by Jim Hughes, and lent to me thanks to Elsie Hughes with some extra research by me at Morden College and at London Borough of Greenwich.

I have just discovered your blog and it has added much new information about my great great grandfather Frederick Augustus Hughes, 1811-1875. You can find more details about the business side of the Hughes family on the website of Interserve, a big construction company which evolved from the Hughes family business. They have an interesting history of the co. section. I have just started researching my family. I am also very interested in the Maria Mumford (1847-1926)that Edmund Hughes married at Brockley church in 1877. She was the daughter of Peter Mumford and was born in Newcastle Sreet Clement Danes. Is this the flour mill mumford family you mention?
I have an old family tree of the 19th century Hughes family, which gives dates etc. but nothing on their lives or history. I do hope I may hear from you! Best regards from Australia, Gordon Hughes