This article is one of a series originally written for Bygone Kent. Since then everything has changed. Up until 2001 or so boats were still calling at what was a working wharf - but then Tarmac sold up. The wharf site now has planning consent for housing, which has not yet been built, and the site has flooded. During preparation for building an early medieval tide mill has been found on site - something which looks likely to change the whole history of what we understand as 'Greenwich'.

Since then I have also visited Watchet and seen the replica of 'our' wall as a display on the station.
When I was seven we went on holiday to Bournemouth. I remember the long coach journey all the way from home in Gravesend, and the p

each melbas and the long walks up the chines – but most of all I remember the visit to the Great Globe at Swanage. I still have the photograph my dad took of me and my mum at the globe – and, because he was a keen amateur photographer, there is a lot more of the globe in the picture than of us! I was to return to the globe fifty years later as part of my research on the Greenwich riverside.

In a previous article I have described how Coles Child leased land on the Greenwich riverside –Dog Kennel Field – and used it to build houses and factories. The houses still stand in Pelton Road and the surrounding streets – and some of his wharves still remain. One of these wharves has been known as ‘Granite Wharf’ and, until the past few months, has been in use by Tarmac for road building materials. Records show that Granite Wharf was leased by Coles Child to Mowlem, Burt and Freeman in 1852.

The original John Mowlem had been a worker in the Dorset stone quarries who came to London to find work with a sculptor and then founded what was to become the famous contracting firm in 1823. He began with some paving contracts and a wharf at Paddington. By 1852 John Mowlem himself had retired back to Swanage and the firm was then managed by his nephew, George Burt. He too made his home in Swanage and between them Mowlem and Burt managed to take back to Dorset an extraordinary collection of bits and pieces from the London streets. It appears that anything interesting that turned up in the course of demolition and renovation was simply removed and found a place in Swanage – visitors to that town can followed guides and tours to see these monuments and part monuments in some surprising situations.

Mowlem’s main yard was at Millbank on the site of what is now Millbank Tower. The Greenwich wharf is sometimes described as their ‘stone yard’ and no doubt many of the items now in Swanage were taken to Greenwich before being shipped out. ( Maps from the early 1860s show little or nothing on the site – but the records tell us that ‘Mowlem are building substantial buildings on their site’. A roadway, on the line of today’s Cadet Place, goes from what was then Chester Street (now Banning Street) to the river and marks, then as now, the boundary between Greenwich (Lovell’s) Wharf and Granite Wharf. Another pathway turns nort 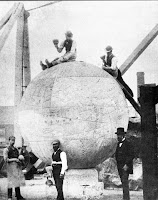 h east towards the river – there is nothing else. The 1869 Ordnance map tells a different story. The site is now marked as ‘Stone yard’ and two tracks of rails appear to cross the site towards the river edge. There is a slip marked as well as ‘mooring posts’ and a crane. Twenty years later the wharf is much the same although some more substantial buildings have appeared and ‘dolphins’ are marked in the river. The pathway, now ‘Cadet Place’ is called ‘Paddock Place’.

We would know almost nothing about Granite Wharf if it were not for one picture. This picture is today sold at The Durleston Country Park near Swanage as a postcard – but few people in Greenwich would know what it was. I do not know how researchers in Swanage have identified the picture as Greenwich – David Lewer and Bernard Calkin who wrote Curiosities of Swanage had access to an unpublished history of John Mowlem which I have not seen. The picture shows the Great Globe, now at Durlston Head, under construction in Greenwich. Two stone carvers site on top, behind it is a great crane – perhaps the one shown on the map – and in front three figures. That on the right has been named as Joh

The Globe seems to have been the idea of George Burt who, a few years earlier, had commissioned a smaller granite globe which is now on display in Beaulieu. The Great Globe is made of 15 pieces of Portland stone – held together with granite dowels. It was taken from Greenwich to Swanage in sections on one of Mowlem’s sailing vessles and erected at Durlston by a Dorset builder. Whether the stone was taken originally from Swanage to Greenwich for carving is not known – but the expense of carting 40 tons of stone between the two must have been considerable. (ref)

Durlston Country Park, the Globe and the various other things which surround it are well worth a visit. The whole experience is extremely bizarre. Above it is a strange mock castle and all around are bollards, stone tables, boundary stones, etc. from the streets of London. The Globe is carved with a map of the world and various astronomical statements about The Sub, Moon and Earth appear. There are also stone tablets carved with homilies on the subject of Temperence, Prudence and so on as well as ‘clock times of the world’ , ‘convexity of the ocean’ and much else.

Cadet Place – once called Paddock Place – runs along the south east boundary of Granite Wharf. The wall of the wharf here is simply extraordinary, consisting of what appears to be pieces of random stone, s

ome of it set up as a sort of blocked up gateway. Geologists have begun to take an interest in this wall – dubbing it ‘Cyclopean’. The stone has been identified as part of the stockpile of stone which Mowlem’s had in the yard. It is thought that stone quarried in Dorset was shipped to Greenwich to be held here until it was needed elsewhere. It would then be shipped out by Thames Barge. It includes, says geologist, Eric Robinson: ‘White Portland Stone, some of it dressed with the stone pick, pink and red sandstone – not necessarily as hard as the Coal Measures York Stone - - they are joined by ‘Bluestone’ (Diorite) .. at either side the blocks sit at unusual angles with an infill of angular pieces of dark bluestone – this dark stone came from Guernsey in the Channel Islands and was much used in kerbs and cobbles’. It is pointed out this miscellany of stone pieces might serve as a museum of the sort of stones which made up the stone cartage trade in the English Channel – ‘just add some granites’. He continues ‘look at the cobbles and smaller cube setts in the entrance to the yard and you see all of these granitic rocks polished by cart wheels and cars’.

Elsewhere Eric Robinson has provided guides for school children (and indeed adults too) who want to explore the world of stone around them and analyse the history of a site from the stones which used to build it. I was not so lucky as a small child. When we visited the Globe at Swanage in 1947 I had no idea what it was – but, gosh, I was impressed!
Posted by M at 12:35

I have a friend who's grandad was harbourmaster at Lovells Wharf.

Jools Holland, made a TV film called (I think) 'walking to New Orleans', which opened with him at the riverside path by Lovells Wharf, with Paula Yates and Robby Coltrane. Ms Yates posing as a racy lady offers Jools sex "wioth a rubber, £5".