Arrived two minutes ago - The Greenwich Historical Association Programme. Their next meeting will be of particular interest to students of Greenwich industry. It is:

Wednesday 27th January 2010
The Soames Family of Blackheath
NEIL RHIND will talk about The Soames Family in Greenwich and Blackheath, who were wealthy merchants living in Blackheath from the 1840s to the 1930s. One member was James Soames, an industrialist and owner of the famous Thames Steam Soap and Candle Mills; his brother was the Rev William Aldwyn Soames, Vicar of Greenwich. Among their many mansions were the Red House next to Vanbrugh Castle, Maze Hill House, and 27 Vanbrugh Park.

Thames Soap Works was on the site currently being demolished with the Syriol Glucose refinery on it. They made all sorts of soaps for the hard working and hard pressed = "coal tar" soaps made in the days when the most important thing was to kill the germs NOW!!! 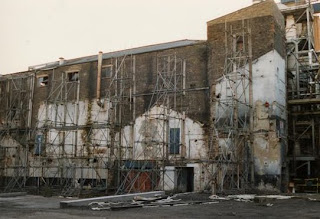 This picture was taken inside the site when it was owned by Amylum. It shows a wall which had survived from the soap works and on which underneath the scaffolding was written 'Thames Soap Works'.

Wednesday 24th February 2010
Greenwich Park: Trysts and Intrigues
ROSIE HAYLES reminds us of the Hanoverian neglect of Greenwich Park which gave rise to a wide range of ideas for its exploitation. Prostitutes eyed its seclusion, park-keepers and water boards its natural resources, sculptors and railway companies its position; Greenwich Hospital hoped to build houses in it and Queen Caroline demanded a large corner for her private use. The public began to take the park to their hearts and many hopefuls were seen off by force of public opinion. The ball of protest was set rolling by an abused under-keeper called Cawthorne.

Wednesday 24th March 2010
President's Address: Greenwich Lost and Found
ANTHONY CROSS of Warwick Leadlay Gallery, Greenwich, using the visual means of his archive, will seek to re-discover aspects of everyday Greenwich which have otherwise been lost to the present-day observer. This will be given after our traditionally short AGM.

Wednesday 28th April 2010
Memories of Growing Up in 1930s – 40s Blackheath and Greenwich
SYLVIA WHITE was born and brought up in Blackheath, and grew up in the 1930’s and 40’s when poverty was rife. She was one of five children who were given freedom to roam. This meant that the Heath and the Park were their playgrounds and they came in contact with children from different classes. Blessed with a vivid memory she has written two books about growing up in this area and her talk will be about those times. Now an active member of the University of the Third Age, she runs groups encouraging people to preserve their memories.
Posted by M at 15:52