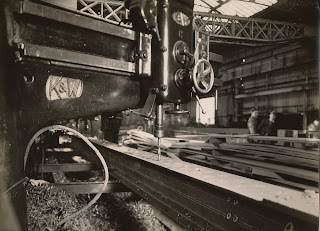 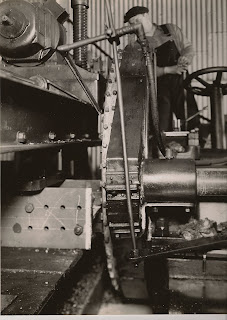 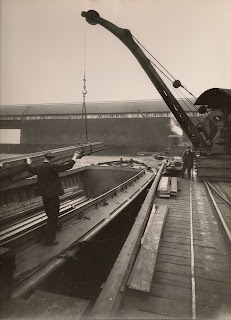 Redpath Brown's structural steel works stood on the Greenwich Peninsula in what was then Riverway which ran from near the Pilot to the river. They were a Scottish based firm which came to Greenwich in 1911. 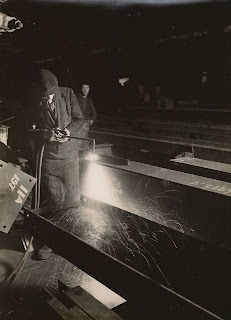 According to the publication 'Cleveland Bridge - 125 years of history' the firm set up its Greenwich operation somewhat earlier, in 1903. Redpath Brown was taken over in 1922 by Bolckow Vaughan which was in turn bought out by Dorman Long in 1929, although it retained its name for some years afterwards.

I'm getting a curious feeling of déjà vu from the top photo. I think I may have driven that overhead crane. How many overhead cranes could there have been in E Greenwich? That said, I can't remember much about it at all - it was incredibly easy to float from one job to another in the 70s, so easy that it's all a bit of a blur now.

Yes Deptford Dame you could well right. I meant to check the dates with the member whose father wrote a history of the company - but I lost his email address (sorry, Andrew, please get in touch!).
However although there were, as you say, takeovers locally the firm was always seems to have been known as 'Redpaths',even after nationalisation.I have never discovered how you pronounce Bolckow.
Incidentally hopefully one of the developers working near the site now might call one of the internal roads 'Red Path'. More pictures to come.

After nationalisation the construction engineering activities of the various firms were consolidated into BSC's Constructional Engineering Division. However in 1972 this division was relaunched under the name of Redpath Dorman Long, which is how the name survived. Name changes continued after RDL was bought by Cleveland Group in 1982, but the Redpath name endured for almost another decade. Even then I'm not sure it disappeared totally, but yes it would be nice to have a Red Path as a memorial!