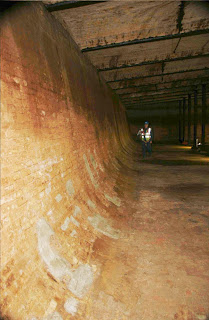 We have a communication from Plumstead about the reservoir in Heavitree Road which it is thought is under some threat. They have included the following information and some pictures.
"A plaque above the access doorway indicates a possible date of construction of 1854. The date may refer to the year when the roof was added; it is possible that the reservoir was constructed before 1840.
We believe it to be one of the oldest covered reservoirs in the UK and the longest serving brick built Victorian reservoir in London.
There are two tanks separated by a common wall. The date of the original tanks is not known. The reservoir may have originally been construc 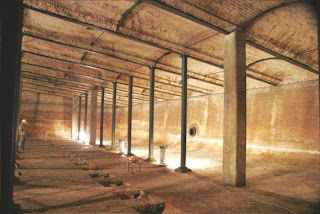 ted as an open tank. Visual evidence, such as different brickwork at the top of the sidewalls indicates that the reservoir may have been later enclosed with the addition of the arched roof structure. The two tanks may not be the same age.
The tanks are divided by a N-S aligned raised walkway along the central dividing wall and linked by arched openings in the upper part of the wall. The eastern chamber is c.15.66m wide, the western chamber is c.14.9m wide. Each chamber measures c.29.8m long. The roof rises to give a fall away from the common wall which runs North-South. Cast-iron beams, spanning East-West, support brick jack arches; thebeams are supported at midspan on 8” diameter cast-iron columns. The walls are of yellow brick masonry set in a lime mortar.
The corners are curved to eliminate dirt traps. The brick floors fall to a central North-South drain in each tank. Small bridges span the channels.
The tanks are in good condition, and we submit that the building, as a Victorian brick-built reservoir has intrinsic architectural and historic interest and rarity, in both national and local terms. The design, plan and materials make this building a valuable part of the nation’s industrial architectural heritage
Posted by M at 15:42