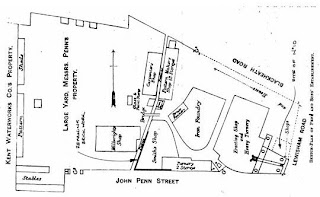 Last night the Greater London Industrial Archaeology Society hosted the launch of a new biography of John Penn by Richard Hartree. Penn's 19th century engineering works stood on Blackheath Hill (now Wickes). They were pre-eminent internationally in marine engineering-for example they built the engines for Warrior, now preserved at Portsmouth. One family member lived in The Cedars on Belmont Hill, and another built Penn's Almshouses in Greenwich High Road.
More details of the book later.
Posted by M at 11:43

I cannot be precise about the location in Greenwich of Penn's mighty works but it was on the Blackheath Road, close to the junction with Lewisham Way. A good walk away from Wickes.

The Penn who lived in the Cedars, on Belmont Hill, was the great John Penn himself, the subject of Richard Hartree's book (Not Hawtree, by the way). It was the famly home from 1856 to the death of his widow, Ellen, in 1911. The almshouses in Greenwich South Street were erected in 1884 to the memory of John by the grieving widow.

sorry Neil- and thanks for the note. I only put Wickes in as a local landmark and I've now added a works plan - given to me a couple of years ago by George Arthur.

Thanks for this Mary and Neil.


If anyone want to get the complete story contact me.