This is written from memory and may not be entirely accurate. I would therefore ask that it is regarded as confidential and that none of it is reproduced or quoted until I can write it up from referenced sources. I will try to add to it as more reliable information becomes available.

There is a lot of the path – but  this is basically about the stretch from Ballast Quay to the Yacht Club – but there are other problems – although different ones – all the way down to Thamesmead.

The path round the Peninsula is a traditional walkway along the top of the river wall.    In the 1870s the then Greenwich Vestry obtained a judgement at the Kent Assizes to ensure that it was open to the public having been stopped up by a shipbuilding company.   I am not clear on its current status – it is a ‘right of way’ not a highway, but rights of way in London are difficult. However, when the right of way was established Greenwich was in Kent.

In the late 17th century much of this riverside was passed to the Blackheath Charity, Morden College, who still own/control a great deal of it.  Other sites were in private or charitable hands.  The Enderby site was owned by the Government in the 18th century but has been private since.  Clearly the gas company (South Met. then nationalised from 1947) owned a large estate here and bought up some other sites when they fell vacant – this whole area was vested into the New Millennium Experience Company in the 1990s and is now with the GLA.  However most of it is leased to major holding companies, in some cases there are several layers of leases.

When the gas company was opened in the 1880s they were allowed to close the path around their works and they built Ordnance Draw Dock as what we would now call ‘planning gain’.  The draw dock is a right of way.  When the Dome was opened the closed stretch was reopened and upgraded but the operators of the Dome (AEG) have never done anything to enhance their interface with the path – and, probably don’t understand that the river is even there!!

Between 1860 and 1970s most of the sites along the path were working wharves but the path remained open despite some problems and diversions. Several wharves were safeguarded in the 1980s and some have retained this status. Some wharves were still at work in the 1990.

In the 1990s the path was declared Cycle Path No.1. by SUSTRANS and criteria for turning the path into a fast cycle track were worked out.  I am very unsure of the planning process with this but it has meant that developers have to install a double paved strip and that there is planting between the path and the river (presumably for safety).  This is not the spirit of the river wall walk!   In 1998 the Council took Hansons to court over closure of the path through their site. The way was only proved by aerial shots showing painted footprints – but the judgement upheld the right of way.

Over the past few years industry has gone and developers have moved in.  In the late 1990s Groundwork, who work independently of the local authorities, did a lot of work on the path.  They did deals with various industries to plant trees and flowers and enhance the path. Amylum (sugar refinery on Morden Wharf) were already funding the Eltham Environment Centre and were very keen. Groundwork also spent a lot of time doing up the jetties.   At Enderby Wharf an artwork was installed on the steps and commissioned by Carol Kenna. (I have details)

In 2000 was the Millennium Exhibition – and local environmentalists produced a booklet ‘Millennium Domesday’ (I have a copy).    NME did not engage with locals or local industries about the path but some art works were commissioned which remain.  They also did a considerable amount of planting around the Peninsula – some of this has remained and is maintained by a workforce. I am not sure who is now running this but I think it is the same independent organisation which now owns the ecology centre and the parks.  They do not do the riverside path on the west bank which is supposed to be cared for by the various owners and the Council has enforcement powers on this. They maintain the east bank.  The decision to appoint a non-council operator for the parks and paths was taken by the Government.

As the 2000s progressed various sites were handed to developers. Lovells , Granite and Pipers Wharf were passed to developers by Morden College  - although Granite and Pipers were still active.  Two cranes on Lovells which the Council was trying to preserve (they were not accepted for listing by EH) were removed without notice by Morden College.   The wharves were developed with housing – and on one site an early medieval tide mill was discovered. Following community action in 2013 developers were refused planning consent for higher buildings and a compromise was later reached. The boat repair yard was moved to a purpose built site at Bay Wharf as part of the planning deal on what is now called Greenwich Wharf – but delay for many years means this move is very recent.

Meanwhile Alcatel sold the riverside strip at Enderby Wharf to developers – their factory remaining at work. The developer got planning consent for housing and a cruise liner terminal (with expressions of approval from some local groups and no obvious opposition).  They then went bankrupt and the site became derelict.  The adjacent site – the sugar refinery – was sold to a French farming co-op.  One day a demolition crew arrived, with no notice or liaison with the Council or the PLA, and demolished the entire site, including three silos which were being considered for listing. They left the site empty and derelict.  The victim of this was listed Enderby House which was trashed over the next year because there was no site security.

Later as Knight Dragon became more established a golf range has been set up on Delta Wharf and plans are in place for Point Wharf – and a hotel has been built north of the draw dock. Hanson’s have a factory on their aggregate works at Victoria Deep Water (this is a wharf which PLA are unlikely to agree to de-safeguard).    More recently housing has been built at Enderby by Barratt and a row has erupted around the cruise liner terminal following the submission of a new planning application for the site.  The old sugar refinery site at Morden Wharf is now with U&I whose plans are not really clear – as Cathedral they had a reputation for sites with a lot of amenity but they are a different organisation now.

In 2014 the Enderby Group was set up to lobby to ensure Enderby House was repaired and that some way be found to recognise the telecoms heritage of the site. The developer, Barratts, are thought to be planning a pub in the house. We are no further forward with anything else!

Currently Knight Dragon have left the Shooting Star at Point Wharf – and we understand that plans for the Aluna moon clock are still viable.   A sculpture trail from Three Mills on the Lee crosses the river and takes in art works as far as Shooting Star – it would be useful to extend it.  We also understand that the ‘secret ferry’ is to become a public facility following work at Trinity Buoy Wharf (can find out more about that).  However there are also plans for the hotel to use the old Ordnance Wharf jetty for hotel boats (I don’t see PLA agreeing to that but we shall see).

So – there are a certain number of conflicts here – and are added to by various rights on the foreshore (owned by the Crown) and the role of the Environment Agency in regard to the river and the foreshore.  Several of these bodes are not likely to engage with community representatives.

I am waiting for answers to a lot of questions about liaison between various bodies, about planning agreements on the river frontages, monitoring and responsibilities for damage, reporting, signage, information (for eg developers refused to put up info on the medieval tide mill) , safeguarding wharves. Will update this when I get answers.

And then there is the gasholder  - this is an interesting site which was the subject of a planning brief last year.  It has a number of buildings on it which will have to remain which include the Horniman Museum store and that club.  It is walking distance from Enderbys and indeed from most amenity sites on the Peninsula.  Just think what could be done with it! 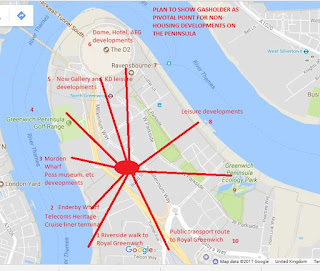 “This unknown and unnamed riverside path is the best Thames- side walk in London. It beats all of the embankments and water- gardens hollow. Best in this direction, because then the walk has a climax: the domes of Greenwich Hospital beckoning round the bend of the river, and a splendidly unselfconscious free house, the Cutty Sark.
The entrance certainly takes some finding: to get there, fork left facing the southern entrance to the Blackwall Tunnel with its pretty Art Nouveau gatehouse. About two hundred yards along, on the left, a passage leads down beside the Delta Metal Co. It zigs and it zags, but it doesn't give up, and eventually comes out at the river.
The start is now a sizeable belvedere, but the path soon takes on much more exciting forms: between walls, or unfenced above a slide down to the water, or wandering past timber wharves, under cranes and in one case nipping around the back of a boat yard. Never the same for a hundred yards at once, a continuous flirtation with the slow- flowing river, choked with working boats.
The first houses come in at the Cutty Sark (Union Wharf): then there is a final exciting stretch past Greenwich Power Station and the astonishing contrast with the Trinity almshouses next door, another good riverside pub (the Yacht), and the climax of the footpath in front of Greenwich Hospital. Not just a walk, but a stressed walk - mostly by accident. God preserve it from the prettifiers.