Thanks Mary Jane for this photo a paper from Pipers barge builders - their site was on the Peninsula between Lovells (now Riverside Gardens) and Enderbys - in fact mostly the site recently vacated by Deverills boat repair business.  Pipers were famous for their spirtsail barges - and particularly those who won many races 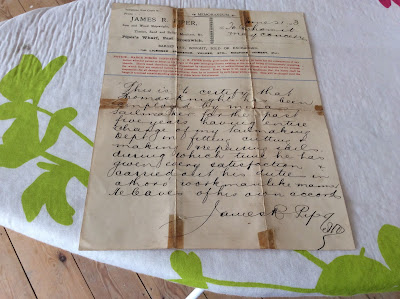 Here is a photo of the letter signed by James R. Piper that was sent to my Grandad in 1913. My Grandad went on to be in charge of the rigging on the Cutty Sark when it was put in dry dock in Greenwich. His son became a sailmaker and was involved with the TV series called the Ondenin Line. Also his Grandson became a sailmaker as well. We are very proud of them all. I have lots of papers to do with the work he was involved with. I hope this paper is of interest to you. .
Posted by M at 10:23

I have a little Piper steel motor boat built approx 1963, named Sally B. If anyone could point me to any resources that could help me work out it's history that would be great.
Thanks, Stu