Telcon - and atoms for peace

The following article appeared in the Telcon Magazine for Spring 1958

IT was a dull, grey morning in February, 1955 when Telmag first become involved in one of the most daring experiments ever attempted by British nuclear scientists. The telephone rang and a voice enquired casually whether we could supply cores of a size which was about ten times larger than anything we had previously produced, and which weighed about one hundred times more than our normal "large" cores.

We asked for twenty-four hours to consider the matter and gave an affirmative answer the following morning. Subsequently, a number of meetings were held in an atmosphere of great conspiracy and mystery and, finally, to our great delight we were told to make a sample for test purposes. The sample was not really very successful but we had learnt quite a lot and the authorities, with great courage, and no doubt some misgivings, decided to proceed with the experiment.

A period of considerable activity followed and thanks to a really good team effort by the engineers, production and planning departments and the electrical laboratory, the last component in the series was finally despatched in August 1956 just two weeks ahead of our original delivery schedule

Then came a long silence and we wondered whether the great experiment had failed - perhaps atomising its originators in retribution for their temerity - but, at last, on Wednesday October 16th 1958 the Daily Express produced a streaming headline – ‘ The bomb is tamed for peace’ cried Mr Chapman Pincher and ‘limitless power can be derived from heavy hydrogen produced from sea water’.  No official statement was issued by the authorities, however, although various knowledgeable people, when questioned, were observed to smile mysteriously and someone went so far as to admit ‘there seems to be a chance that it might work’.  The full significance of this experiment and the outstanding success of the Harwell scientists were of course finally made known on January 24th 1958 and we now take pleasure in offering our respectful congratulations to all concerned.

Imaginative thinking coupled with tremendous drive and enthusiasm, were undoubtedly the two vital ingredients which enabled the Harwell team to carry this exercise through to a successful conclusion.

Telemag feel very honoured in having had the chance to play a small part in this remarkable experiment and when a letter arrived from the Deputy Director of the Establishment himself expressing satisfaction with our work we really felt that our efforts had been worthwhile.

Every time that the phone rings now, we answer in the hope that somebody is going to ask us for some cores with dimensions in furlongs. 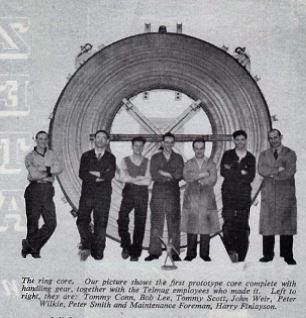 the two pictures shown above are taken from the relevant Telcon Magazine. There is no attribution on either .  If eiother are someone's copywrite, apologies, and we will remove it as soon as it is brought to our attention.

Ah, Zeta. Another of those many steps on the way to free, or too-cheap-to-meter, electric power. And 60 years later fusion power still hasn't been achieved. One day, maybe.

It's great to read this article on the very first step of British Nuclear Fusion research! Thanks for sharing this article. Even though we haven't been successful in harnessing the full potential of nuclear fusion reaction to design and develop a full scale nuclear fusion reactor to generate electricity, we have made enormous progress in understanding the engineering complexities and challenges of a fusion reactor. UK is currently the home of JET, the world's largest tokamak (a magnetic confinement system to host the plasma which is a Deuteruim - tritium fuel mix). We are at the forefront of fusion research and are playing a key role in the design and construction of ITER (an international collaboration to build a scaled up version of JET in France). More details on the current status of Nuclear fusion are at the links below -
http://www.ccfe.ac.uk/JET.aspx
http://www.ccfe.ac.uk/ITER.aspx